Here's what 2019 looked like on the blog and writing fronts
(aside from the newborn and kindergartner, the day job, the Master's degree, the book reviews, and the other hobbies...):

I blogged about my favourite pen!

I wrote thousands of words as part of the thelitforum houseparty set on the Titanic!


April to June
A Round of Words in 80 Days Round 2: My goal was to edit The Handful of Time. I started, but didn't get beyond the first few chapters. Instead, I blogged about writing romance...

I redid the Friday Five questionnaire

Then I revisited how I started writing (see more below)


July to September
A Round of Words in 80 Days Round 3: My goals were to keep going on edits for The Handful of Time and edits for my short story Blackbird's Song, and get around to submitting Druid's Moon for an editorial review. I did a bit of the first...

I did the July exercise (step into someone else's shoes) on the forum and shared my snip, featuring Christianne and Rory

Now it can be revealed: I participated in WRiTE Club!

Then I blogged about the Geneva Library in English book sale, spring edition

In August, I wrote another 20k or so during the Ask Me Anything houseparty on the forum. This really helped me work out Simon MacDonald and Kimberley Hamilton's backstories for National Novel Writing Month


October to December
A Round of Words in 80 Days Round 4: My goals were to keep up with (complete?!) The Antipodean Time for NaNoWriMo (done!), solve the plot hole in The Handful of Time (not done!), and keep up with school and everything else (ongoing!)

I shared all the AMA questions on my blog -- they make great story prompts!

I forgot to blog about the book sale in November, but did tweet about my book hauls! 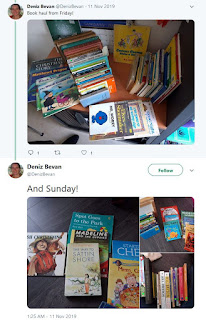 I wrote the first draft of The Antipodean Time, Simon and Kimberley's story, during NaNoWriMo. This book needs a new title, because they never did end up travelling to Australia or New Zealand...

In December, I wrote over 11k during the Making Spirits Bright (Night at the Museum 2) houseparty on the forum

And then there's the best writing advice, from Diana Gabaldon

Finally, I consolidated all my research lists, thanks to an Insecure Writer's Support Group Day question!


Another thing that happened in December is that Marie Fredriksson of Roxette passed away. 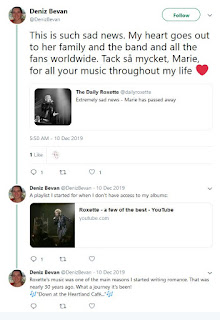 
I wrote an entry in the remembrance book, talking about how Roxette was one of the first bands I ever got into on my own, without my parents’ influence. I was about 12 when Joyride came out; it was one of the first five albums I owned (on cassette!). My favourite song at the time was Fading Like a Flower.
[I knew it backwards and forwards. In the old days, when you couldn’t just press rewind on a CD, I made a tape with the song on repeat all on one side (the other side was Don’t Cry by Guns ‘n’ Roses, both versions).]
That was back when bootlegs were still difficult to source. I got onto one of the first fan mailing lists in about 1995, and a friend from Sweden I made through that list sent me a bootleg on cassette, along with another tape of some of his favourite Swedish music. Whatever Swedish I’ve learned has come from translating Roxette and Gyllene Tider lyrics back and forth for myself.
[Most of that bootleg is on YouTube now. In the pre-Internet days, in North America, where music news from Europe was so hard to come by, I never-often-enough felt the thrill of finding the slightest news article about the band (mostly through German magazines found during summers spent in Turkey). And now I live where, buying up the newspapers the next morning, the cashiers and I are commiserating together.]
The bands’ influences on my writing can’t be overstated. They had everything to do with my first two romance novels, and at least one of the more recent novels mentions their albums directly. Many more scenes owe their inspiration to the lyrics and emotional tone of so many of those songs.
[The two novels are in the long list below.]
My heart goes out to Marie’s family and the band and all the fans worldwide. Tack så mycket, Marie, for all your music throughout my life ❤


Today is Insecure Writer's Support Group Day! Visit Ninja Alex's blog for some great news of new releases, including the IWSG Anthology and the new collection Tales from a Hack.

January 8 question: "What started you on your writing journey? Was it a particular book, movie, story, or series? Was it a teacher/coach/spouse/friend/parent? Did you just "know" suddenly you wanted to write?"

I blogged about this last year! Here's the relevant part of my How I Started Writing post:

"I've been writing since I was in the first grade. My first stories were about a kid named Aldo and another kid who was friends with a cow who went to the moon. Later on, I wrote short stories that had stickers in place of some strategic words, and a story about a birth in the family, told from the point of view of the kettle on the stove.

I tried writing my first novel when I was in the fourth grade, about a new girl at school. My sister still remembers it and asks whether I've kept it. Kind of like J.R.R. Tolkien's memory of reading a story to one's parents and having them criticise a miniscule aspect of it (his mother had told him he couldn't say "green great dragon" but had to say "great green dragon"), my mother, when she read my story, asked why I was using the acronym TP, and told me that one should try to explain anything that the reader might find confusing (in this case, TP was toilet paper, and the kids were TPing the new girl's house).

So for all intents and purposes I've been writing my whole life and have learned how to do it by: reading; writing; reading some more; and letting others read my writing."

That post didn't quite explain why I started writing, though. Everyone in grade school gets asked to write stories or keep journals -- what makes some people continue? What was the idea that sparked my fourth grade novel or the short piece I wrote about a dragon (Rosey the dragon) or the plays I wrote in fifth grade (one was about a child who go lost during a family picnic)...? I think reading had something to do with it -- I loved MG and YA books, and maybe I was trying to capture something of the tone of my favourite stories.

Something I mentioned in my 2017 recap was the idea of concentrating on reading all the books we already own. I seem to have a rotating 50 (counted generously) and probably 150 (counting even those books that I never mean to read) in the house at all times. I'd like to move them all onto one shelf, maybe. I do have one dedicated shelf for this at the office, and I’ve slowly begun to work through them.

Keep up with blogging (including commenting during the A to Z Challenge!) and the forum. This is hopefully going to get better once school is over. Two courses left!

Check the boxes of "writing to do" and type up all notes on paper and collate all story ideas and ideas from dreams, ideally into my lovely new Kate Davies journal (including the c. 300 Save to Scrivener emails to myself!).

Find homes for the finished short stories (self-published anthology?)***:
Blackbird's Song
Summer Blaze (sort of a companion piece to Summer Fire)
The Tattoo
One to Another
Little Upon the Earth, but Exceeding Wise
Where There's Life
He Ain't Heavy
Eyes of the Sky
Late Night, Maudlin Street

Figure out what to do with the orts, such as the CampNaNoWriMo2015 story The Heathen in the Hold, and others, including items such as this post-apocalyptic story idea I wrote in 2010, based on a dream, the idea mentioned in my 2016 recap, and all other such half-formed notions.


I'm going to list my overall goals by story, taking up the list of Works Completed and In Progress from the bottom of this blog that I consolidated during last year's review and adding to it (the last few are all ideas, except for the two completed romances; other ideas and completed short stories and early novels should be added to this list eventually, for the sake of completeness – collating all of this stuff is another ongoing project of mine!).

Works Completed and In Progress (most of them!):


For the first round of ROW80 for this year, then, I'll try to work on on-screen edits for The Handful of Time, and see if I have time to participate in the current writing exercise on the forum, all about travel writing.


What are your goals, short-term or long-term?
Have you done a recap of 2019? Share the link in the comments!

Hilary Melton-Butcher said…
Hi Deniz - I can't keep up ... you do so much ... and yes you have lots going on - so pleased about no 2!! It's great to see them ... and can quite understand why your blogging involvement isn't huge - except keeping up with us and joining in occasionally ... good luck with 2020 and then the decade ahead. I think I'll just keep going my way for now - things may change - we'll see ... all the best and cheers - Hilary
8 January 2020 at 07:24

Deniz Bevan said…
Thanks, Hilary!
All the time I used to take blogging is now swallowed up by school assignments and homework :p I also lost track of things when Google stopped sending me every comment in my email -- I used to be able to keep track of who I'd replied to and who I had visited using that feature, but without it, I find it a lot more confusing!
8 January 2020 at 07:30

Alex J. Cavanaugh said…
Glad you overcame the criticism and wrote anyway.
Cool you participated in Write Club.
8 January 2020 at 09:37