Learning From the Masters

might have mentioned this before, but the BBC have put up archival footage of interviews with authors, including Tolkien, Maugham, Wodehouse, Graves and a host of others. The Tolkien one is full of university kids blabbing but in between there are some lovely snips of Tolkien talking about languages, allegory vs application and kicking the sponge out of his bath when he got an idea, as well as the theory that all stories are about death - here he quotes Simone de Beauvoir and says that these lines are the "keystring" of The Lord of the Rings:

There is no such thing as a natural death: nothing that happens to a man is ever natural, since his presence calls the world into question. All men must die: but for every man his death is an accident and, even if he knows it and consents to it, an unjustifiable violation.

Malcolm Muggeridge says he would have left out Moby Dick, which he found a bit of a bore; Maugham says that unless it's a very very short novel there's usually always some part that is a bore.
Oddly enough, he says there's no connection between what people like and what they write; which is the opposite of C S Lewis' assertion. Then they discuss whether the novel is dead or not; this interview is from 1954! Plus ca change...

Of the above novels I've only read Wuthering Heights, and didn't enjoy it. I've read other works by Flaubert and Dickens, Austen and Dostoevsky. I haven't read La Recherche du Temps Perdu by Proust either, which Maugham says is the best novel of their time; he couldn't include Proust instead of Fielding due to copyright issues.

Wodehouse, meanwhile, talks about sex. Also, I hadn't known that he'd been interred by the Germans during the war. Also, he thinks there are fewer comedy authors because humour only comes through in times that are stable; how was the world of 1958 less stable than wartime, I wonder?
He compares writing to solving a crossword puzzle and says he doesn't believe in letting his authors take charge - he's a plotter!

Graves says it's his Scotch ancestry that keeps him steady, and talks about homosexuality at boys' boarding schools and how it's not an experience that has blighted him. He also says he wrote I, Claudius because they offered him 4000$ and he needed the money!?!? And he compares writing a poem to a cloud that descends on you, and a problem that needs to be solved.
He and Muggeridge mention how the population will explode by 2036 and then laugh, saying "that won't affect us, then". Meanwhile the "chap" who owned all his copyrights was in prison in Switzerland! Finally, near the end of the interview, Graves says he writes poems because he "damn well must".

I could listen to these elderly British men speak all day... And they're all pipe or roll-your-own smokers! In that I like pipes, though I don't smoke one myself.

On the other hand, here's a female British poet, Sadie Smith, talking about her writing process and reading her painful poem Not Waving But Drowning. And here's Elif Safak, talking about storytelling.

On my own writing front, the other day I found this photo by Ara Guler; this is what my male protagonist looks like, after I've erased the anachronistic cigarette from his lips: 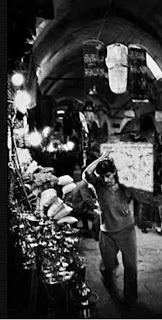 Here's the story of how he came to leave home (Constantinople) in 1480:

I was taught to read and write as a child. The ulema of the mosque to which my school was attached came to inspect our class one day. They saw my written work and praised my penmanship, sent their words of acclaim to my father.
My father was proud, and encouraged me in calligraphy. I was only too pleased to have impressed him. I worked diligently at transcribing and perfected the shapes of my letters; with ink, with lead, with chalk, anything I could lay my hands on. Soon I progressed to miniatures.
One day, some years later, I heard something fascinating. Two of the masters at school were discussing a foreigner, a man named Bellini. It seems the Sultan – praise his name – had commissioned something called a portrait. I gathered from the conversation that this was an image, a likeness of the Padisah, and was bewildered as to why the Shadow of God upon Earth should deliberately flout the word of Allah by having an icon made of himself. Only the infidels worshipped icons, so I had been taught. Yet my masters related the event as though it was an everyday occurrence. I dared not ask them about it for fear I’d be reprimanded for eavesdropping.
Yet the idea stayed with me, and one day, I used my paints to sketch a portrait of my father. I was surprised at how easy it was to effect his likeness, down to the very expression on his face when pleased about something.
Unfortunately, he entered the room at the very moment when I was standing back, admiring my work. His face looked nothing like the portrait I had made. He tore the parchment in half and flayed me then and there.
Yet I did not cease to paint. I hid my experiments from then on, but was eager to study as much of the art as I could.
I left home.

Jayne said…
Oh thank you for pointing the way to these interviews! I knew there was one with Agatha Christie (which is fascinating - do check it out!) but didn't realise they have put up so many others. Bedtime listening tonight is now sorted! As for Wodehouse - I think his internment led to all sorts of trouble for him, as when released he made a series of radio broadcasts from Berlin and was accused of all sorts from England, still at war at the time.
7 October 2010 at 12:26