usic to inspire, music to get your feet moving, music to lull you to sleep... Alex Cavanaugh had a great idea for a blogfest - the Top Ten Countdown Music Blogfest, which took place on Monday. 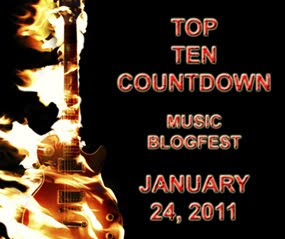 Now, I know it's supposed to be top ten songs... But since I'm coming late to this anyhow, I'm going to fudge a little (sorry Alex!) and do bands. I promise I have playlists to back me up! Here goes, in no particular order...


The Divine Comedy! (I prefer their earlier albums, and have playlists for all of them, but let's go with album number three)


Crowded House! (No playlist for these guys, unfortunately (I really ought to make one for Neil Finn's Try Whistling This), but here's my favourite song.)


Gyllene Tider! (Here's what Per Gessle was doing before Roxette. Again, no playlist, I'm afraid, and I couldn't find a video with English subtitles. The title of this song translates as Love Is Not Blind, But Very Nearsighted.)


Super Furry Animals! (I also like Gorky's Zygotic Mynci, but they don't sing as often in Welsh.)


Blue Rodeo! (Of course, this playlist is permanently embedded at the bottom of my blog...)


Bruce Springsteen! (Alright, I know I could have found a more original song(and I do love The Promised Land), but there is that line "I'm sick of sitting around here tryin' to write this book", and I do have that feeling every once in a while...)


Manic Street Preachers! (Welsh but not in Welsh...)


Marion! (One of the bands I wish would reform. Two brilliant albums and then nothing. I wish I could get a playlist together but not all the songs are on YouTube. I'll stick with my CDs, I guess.)


Sezen Aksu! (I had to throw a Turkish artist in there, and who better than the current Grande Dame? Here's a bit of an oldie.)


Of course, this list leaves out my favourite punk bandsTheStoneRosesTheCurePulpLedZeppelinTheBeatlesTheRollingStonesPearlJamAliceinChainsStoneTemplePilotsGunsnRosesAgeofElectricArcticMonkeysGeneLesRespectablesTheSmithsMorrisseyTheCharlatansTheJamTheSmallFacesMesAieuxetc.etc.

And, oh yes - check in on the Round of Words in 80 Days! Well, let's see... I've been editing! But I'm still adding more scenes. I can only hope that this is because I'd left the first half of the novel so wide open, and that the latter half will involve a lot more editing and a lot less filling in blanks.

I took my first paragraph though (well, slightly condensed, actually) and entered it in Nathan Bransford's 4th Sort-of-Annual Stupendously Ultimate First Paragraph Challenge (I think I might have entered all four! At least the last three). Mine's entry 255, I think, out of 943 to date. Wow. That's a lot of first paragraphs...


The Inquisitors blindfolded her at the town gates. Before that, she had to watch and listen, unable to retort, as strange men growled and spat at her feet. Women crossed themselves and pointed her out to young children, whispering. If she lowered her head to avoid their gazes, the Inquisitors simply jerked it up again, one or the other yanking fistfuls of her hair under the hood of her cloak. She twisted in their grip, looking back down the road, but there was no sign of Brother Arcturus, her guardian. Had he led her into a trap?

Tara said…
Well, I already knew your funky eclectic tastes in music, but...how shocked was I to see Bruce on this list?! [G]

And thanks for the award. Sorry it took me so long to get back to you, but this music fest was huge! I'm going to do a post tomorrow and give your blog a link in it.
26 January 2011 at 09:03

Deniz Bevan said…
Bruuuucee... Couldn't leave him off, Tara, not after how brilliant Magic was - not to mention the Live in Dublin album.
Thanks Kait and Talli for your support!
Oh goody, I'm glad you were able to add me, Alex. I'll try to get to everyone before weekend's end...
26 January 2011 at 20:12

Deniz Bevan said…
And one more thing - I forgot Idlewild!!

You Held The World In Your Arms:
http://www.youtube.com/watch?v=g4k29rpQGG4

Carolyn Abiad said…
Sezen Aksu! Yay! I didn't do the blogfest, but lots of my current favs are Turkish songs. Listening to Ferhat Gocer right now, actually. I love Candan Ercetin too. Meger especially... My absolute fav is Sting though.

Deniz Bevan said…
Thanks Carolyn and Craig!
I thought of putting Duman on there, too - or the soundtrack from Crossing the Bridge. There was some great music in the film/documentary!
29 January 2011 at 13:20

Luna said…
Ooh...I'm intrigued by your first paragraph! Good luck to you...:)

Deniz Bevan said…
You know who else I forgot? Johnny Cash, David Bowie, all my favourite classical pieces... Especially Scheherazade by Rimsky-Korsakov.
29 January 2011 at 14:50

Deniz Bevan said…
Hey Dezmond, have you really? She's been around for a long time now, it'd be great if she had more of an international following.
29 January 2011 at 17:19

Gregg Metcalf said…
Interesting list. The only guy I knew was Springsteen. Always great to learn new music.
29 January 2011 at 18:07

Jemi Fraser said…
Great choices ... at least the ones I know! :)It's so fun to see how different everyone's choices are and how some bands/singers show up on a LOT of lists!
29 January 2011 at 18:13

Kelly Polark said…
Some cool band names that I hadn't heard of ! I love seeing all the different new bands on this fest.
Dancing in the Dark reminds me of Courtney Cox because of the video!!
29 January 2011 at 18:16

Deniz Bevan said…
I know what you mean Jemi - I can't believe how many of us listed Sweet Child Of Mine (okay, I didn't, but it was a toss up between that song, Patience and, well, the whole of Appetite for Destruction!).

Arlee Bird said…
Not sure how I missed your list the other day. If you hadn't done a comment blitz today I would have missed it entirely.

Don't know most of these, but the Finn Brothers in all of their various permutaions are worth a mention. I realized later that I omitted "Don't Dream it's Over", one of my favorite all time songs.

You might have noticed the A to Z Challenge mentioned as you were going through blogs. Did you sign up? If not you might want to check it out. See my link below.

I am a new follower on your blog now.

Deniz Bevan said…
Thanks for coming by and following Arlee!
I'm still debating on the A to Z - I might be on holiday in April, with only sporadic internet access, but if we end up going in May instead, I'll definitely sign up!
Love the Finn brothers, right down to stuff like Six Months in a Leaky Boat [g]
29 January 2011 at 19:13

Anonymous said…
Outside of Bruce Springstein these are new bands and songs for me. I'll check out some of the performances as I'm always open to new music. And thanks for stopping by my blog!
29 January 2011 at 22:49

DiscConnected said…
Interesting list that runs the gamut of genres.

Not having a Springsteen song on ym list was painful...

Anonymous said…
Thanks for sharing your favorites with us! Even if you did have to fudge.
30 January 2011 at 20:00

Donea Lee said…
Hi Deniz - wow, amazing that you made it to everyone's list who participated in the blogfest. That's awesome! I agree - lots of wonderful music out there. Your list gives me some more great bands to discover (I only recognized a few...) so, thanks!
30 January 2011 at 20:33

Deniz Bevan said…
Thanks guys!
I can't believe I made it to all the blogs, but I'm glad I did. It was so much fun seeing everyone's choices and checking out new bands.
30 January 2011 at 20:41

Vicki Rocho said…
I'm sooooo far behind on this blogfest, I might just admit defeat. Some great songs on your list, and some I'll have to check out as there's some similarities with mine.
1 February 2011 at 21:23