ay for writer's conferences! They don't quite make me feel like a girl in a martini glass (they might, if I was writing Dorothy Parker type stories), but having been to my first one yesterday, I can definitely say they give you a buzz!


I attended one session with Canadian author Brian Doyle (ashamed to say I'd never heard of his books before but I snatched up two directly after the session) which was an exciting reaffirmation of the strength and beauty in language. One of his examples was the opening to Dickens' Bleak House. You can just feel these lines rolling off your tongue:


"Fog everywhere. Fog up the river, where it flows among green aits and meadows; fog down the river, where it rolls defiled among the tiers of shipping and the waterside pollutions of a great (and dirty) city. Fog on the Essex marshes, fog on the Kentish heights. Fog creeping into the cabooses of collier-brigs; fog lying out on the yards and hovering in the rigging of great ships; fog drooping on the gunwales of barges and small boats. Fog in the eyes and throats of ancient Greenwich pensioners, wheezing by the firesides of their wards; fog in the stem and bowl of the afternoon pipe of the wrathful skipper, down in his close cabin; fog cruelly pinching the toes and fingers of his shivering little 'prentice boy on deck. Chance people on the bridges peeping over the parapets into a nether sky of fog, with fog all round them, as if they were up in a balloon and hanging in the misty clouds."

Doesn't it make you want to leap up and recite poetry? Or collapse on a divan and write poetry?

1. The actual subject of Doyle's talk was writing what you know, not being afraid to write from your own street and backyard, since there are stories to be found everywhere. Which is good advice at some level - though I'm all for exploration and research and widening horizons - but he also observed that even the most outlandish things can be related using familiar imagery, and that was more pertinent to my story. Everyone can relate to examples and similes taken from day to day life, and it makes the exotic especially familiar to readers if your story is set in oh, say, Constantinople...

2. Someone in the audience said something about how her 15 year old son doesn't want to read stuff like this because he finds description boring. I've heard this before (also from adults who tell me they can't read The Lord of the Rings because they find the description boring) and I haven't yet figured out why this should be so. Do these people not read from a young age and so read too slowly? Are they reading all the wrong books and not developing an ear for language? I realise that not all books are for all people but... it still makes me feel sad.

There was a lively panel discussion with Brian Doyle, Peter Carver (editor at Red Deer who, incidentally, has a handbook coming out entitled So You Want to Write a Children's Book), Yayo (illustrator), and Marsha Skrypuch (another yay! this time for Forumites!), chaired by Monique Polak.

Then lunch (with Pam Patchet - yay for Forumites again!), then a session with Peter Carver, who took us through his background as an editor and the current crop of Red Deer publications, and then a final session with Marsha, which was a great talk on historicals, research, sleuthing and much else.

And now to today - a hugely important day in history. It's the anniversary of the fall of Constantinople and of the Restoration of Charles II to the throne - Royal Oak Day!

"Before long, Parliamentarians were searching the woods. So Charles hurried into the Boscobel House garden. He quickly climbed up into the branches of an oak tree and hid..." The tree spread its arms and hid him, and he was not discovered. The Monarch's Way traces the route that Charles followed on his way out of the country. 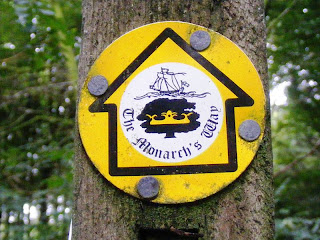 On the writing front, I'm still 40 pages or so from completing all the edits on this round, and then I can start all over again... How's everyone else doing?

Denise Covey said…
Hi Deniz. Only 40 pages. I'm up to Ch 19 of 25 in edits. Plenty to go. Have to write in a section after more research. Fun though.

I enjoyed your post. I adore descriptive prose though I think Dickens was a little over the top. I read recently that Dickens was so riveting because he never lost his 'inner child.' I understand that.

Jill W. said…
The workshop sounds like a lot of fun!

Hmm, I tried to read Tolkien once in middle school (or maybe I was a freshman in HS? I was young) and it just didn't resonate with me. I couldn't get into it. However, to be fair, I didn't give it much of a chance -- should probably try again this summer.

I think I have a tendency to under-describe, for fear of boring the pants off of a reader. Must work on better descriptions. :-)

I can't say I'm editing much of anything, but I *have* plunked down about 500 new words today.

Zan Marie said…
Great post! And it reminds me to get my info together for a summer conference. I think there was a dealine in June.

J.L. Campbell said…
Conferences are rare around these parts.

Naina Gupta said…
I've heard that thing about description is too boring. I believe it is important to find a happy medium. I wouldn't fill two pages with scenery description.

Deniz Bevan said…
Thanks Denise! I've actually never read Bleak House, but I do love wading through Dickens' long passages. Just printed out my entire novel again, to start another round of edits...

Thanks Nas and Robin!

Yay for another 500 words Jill! I guess it depends when you come to certain books - I was 10 when I read The Hobbit and I've never looked back [g]

Hope you have fun at your conference Zan Marie!

Thanks JL - I think it's neat how some days have so many different historical events attached to them.

You're right Naina - there has to be a good balance, and we can use what Marsha Skrypuch calls "active description" where even the descriptive parts have movement and forward momentum.
31 May 2011 at 10:55

Sounds like you had a great time at the conference. I have to agree with you on most adults hadn't started reading early enough. Details are what make the prose come alive!

I found the history of your post very interesting. I remember our prior emails and I know you write historical novels. I can't wait to read a sample of your novel.

Anonymous said…
Thanks for sharing what you learned from Doyle. Not only do I enjoy going to conferences, but I also like to read blog posts about what others gained from their conferences.

Deniz Bevan said…
Thanks so much, Michael! I hear you on the nit pickiness - this is the furthest I've ever gone in editing such a long piece.

Pet Taxi said…
You created a great post with excellent information, i learn a lot of stuff from this article.