The Black Hawk by Joanna Bourne, The Rule of Three Blogfest and Other Events

drian's coming! For those of you who've read The Spymaster's Lady, and watched Annique and Grey deal with a wounded Adrian, Joanna Bourne's latest book explains the backstory - and then some.

The Black Hawk is Adrian and Justine's tale and is coming out 1 November. 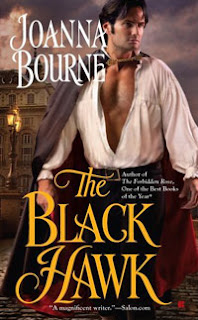 "When veteran spy, Justine DeCabrillac, is attacked on a rainy London street, she knows only one man can save her: Adrian Hawkhurst, her oldest friend... her oldest enemy.


London's crawling with hidden assassins and someone is out to frame Hawker for her murder. The two spies must work together to find out who wants to destroy them."


""My lover is an Englishman. This cannot continue."
Her bed was so full of Hawker. His body disconcerted her, always, with its fierce energies concentrated inside his skin. He lay on his back, half naked, his head turned toward her, his arm across his chest upon the sheet. She did not think he had broken any ribs, but he was holding pain inside him as he slept.
He lay, sunk fathoms deep in exhaustion. All the deadly knowledge of his blood and bone was quiescent. He was like a well-honed sword someone had carefully set down. Sometimes she forgot how beautiful he was when they had been apart for a long time."

Adrian's both mysterious and alluring - here's a glimpse of his face. It's exciting to watch him and Justine at odds, through no fault of their own; they're both sharp and quick-witted, intense and dedicated, yet find themselves on opposite sides of The Game of spying.

Everything I want to say about this book gives away spoilers for what happens between Adrian and Justine. If I say the scene in the storm was sweet and exciting, you won't know what I mean unless I tell you just what they got up to under the rain - and why. If I say the scenes between Justine and her younger sister made me cry, I can't reveal the reason without giving away Justine's secrets.

Let's just say this is Regency romance at its best. A spy mystery at its best. And if you've missed Maggie and Doyle from The Forbidden Rose, they make appearances here.

That's just for the readers - if you're an author, you can't do better than to read Joanna Bourne. Now that's writing! I can't say it more succinctly than that - put aside all the authorly advice from other books or how-to lists and read one of her novels. On the other hand, if you can't do without advice, drop by the Compuserve Forum, where she - and Myrtle - distill authorly tidbits. I'm hoping all of this stuff is lodging into my brain, especially as...

...we round the home stretch of A Round of Words in 80 Days - Wednesday will be my last post. It's been fun being a sponsor this round (here's the motivational post I contributed), and visiting lots of blogs I might not otherwise have read. Everyone's been doing really well! As for me, I got all my editing done - I just have to type it all up. The sooner I finish, the sooner the querying can begin.

Three events on right now or coming up:

13 September was Roald Dahl Day, but as they say on his website: "Roald Dahl Day is now so tremendous and so fantastic that we simply can’t squeeze all of the fun into one day. So we party all month instead! This year, however, is particularly special because we are celebrating the 50th Anniversary of one of Roald Dahl’s best loved stories, James and the Giant Peach!"

The Rule of Three Blogfest! The full rules and description are here. The event starts in October, and participants will be posting four separate posts:


"The Rule of Three is a month-long fiction blogfest, where we've created a 'world', the town of Renaissance, and challenged you to create a story within it. The story will feature 3 characters of your creation, who will be showcased on your blog on 3 different Wednesdays, following the Rule of Three. The 4th Wednesday, we'll have the culminating scene."

Nas said…
BLACK HAWK sounds an interesting read! Thanks for posting about it!
18 September 2011 at 20:14

Tara said…
Ahh. Jo. I'm such a fangirl in so many ways. Nobody writes like Joanna Bourne. Nobody gives better, and more succinct, writing advice. And, her books melt me. She rocks.
19 September 2011 at 11:21

Sheri L. Swift, Author said…
Wow, congrats on your book. The Rule of Three Blogfest sounds fun! I wanted to nominate you for the Liebster, I wasn't sure if you had it yet or not. I love a good fan/fic! My link is: http:sherilswift.blogspot.com/
19 September 2011 at 16:19

Theresa Milstein said…
I love Roald Dahl. I'm sorry I missed his day. Charlie and the Chocolate Factory is my favorite book of his.
20 September 2011 at 12:39

Carole St-Laurent said…
Love Joanna Bourne's stories. Told her so in New-York when I met her at her publisher's book signing. My time period is also the French Revolution and I'm so glad to see an interest for that period.
20 September 2011 at 13:57

Susan Fields said…
I love Roald Dahl! The 50 year anniversary of James and the Giant Peach? I had no idea it was written that long ago.
20 September 2011 at 21:15

Deniz Bevan said…
It's so exciting, Linda! So many good books coming out at the moment.

I have to admit I'm a little scared, alberta. Hope I can make all the commitments.

I'm getting lots of copies as Christmas presents, Zan Marie!

Ooh, you should feature Jo on your site, Nas!

Hear, hear, Tara. Are you listening, brain? Absorb everything you can from Jo!

Matilda was my favourite, Theresa. And his autobiographies as well!

Ah, you're lucky Carole - haven't met Jo in person yet.

Tia Bach said…
Rule of 3 sounds intersting. Something to consider.