A to Z Challenge Day One - American Gods by Neil Gaiman 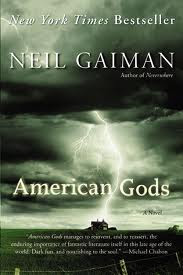 Yes, the secret's out! My theme for the A to Z Challenge is Favourite Books. I might slip in some ROW80 updates or some writing-related talk, but for the most part, it'll be a book a day. And of course, I had to start with my current obsession, Neil Gaiman.

I read American Gods back in January, and since then I've read Anansi Boys, Fragile Things, Stardust, and Smoke and Mirrors. Not been disappointed yet!

Though I did start a long discussion about Gaiman vs Lewis and the Problem of Susan from The Chronicles of Narnia, over at the Compuserve Books and Writers Community.

Gaiman's got a fun tumblr page, and through there I discovered his Writer's Prayer:

Oh Lord, let me not be one of those who writes too much;
who spreads himself too thinly with his words,
diluting all the things he has to say,
like butter spread too thinly over toast,
or watered milk in some worn-out hotel;
but let me write the things I have to say,
and then be silent, 'til I need to speak.

Oh Lord, let me not be one of those who writes too little;
a decade-man between each tale, or more,
where every word accrues significance
and dread replaces joy upon the page.
Perfectionists like chasing the horizon;
You kept perfection, gave the rest to us,
so let me earn the wisdom to move on.

But over and above those two mad spectres of parsimony and profligacy,
Lord, let me be brave, and let me, while I craft my tales, be wise:
let me say true things in a voice that is true,
and, with the truth in mind, let me write lies.

Denise Covey said…
Ha, Deniz - not too much, not too little. Hard to get it right.

Unknown said…
Excellent choice with Gaiman! I've still not read American Gods, but I've heard enough chatter about it to know that it's all kinds of awesome.

Sarah Ross said…
Loving the poem, wise words. Looking forward to seeing what other books you recommend during the next month!
1 April 2012 at 09:29

Glynis Peters said…
Love the writer's poem, and look forward to reading more of your fave books, Deniz!
1 April 2012 at 09:31

Theresa Milstein said…
American Gods was odd, but good. I like seeing the world through Gaiman's perspective. Thanks for the Writer's Prayer.
1 April 2012 at 11:19

Nikki said…
Hey! I found you over at the A - Z signup list. I love Neil Gaiman too, I met him briefly a couple of years ago and nearly died on the spot!

This was a great post, I'm looking forward to reading more! Nice to meet you :)

Carol Riggs said…
Happy April Fool's Day to you too! I like Neil Gaimon's writing style; have read THE GRAVEYARD BOOK and NEVERWHERE (like the latter the best). He's very creative and imaginative. :)
1 April 2012 at 21:33

Shannon Lawrence said…
Oh, I like the ending: "with the truth in mind, let me write lies."

I recently read American Gods, my first ever Gaiman novel, despite hearing about him for years upon years. I loved it! Looking forward to reading more of his books, but I need to pick which one will be next.

Aside from that, I'm your co-host for the A-to-Z! If you didn't get an email from me the other day, it may have gone in your spam box. Please feel free to contact me via my profile or reply to that email if you need anything or have any questions.

TerryLynnJohnson said…
I've just been considering purchasing Anansi Boys as audiobook after reading some great reviews on goodreads.
Good choice? I haven't read any of his other books.
3 April 2012 at 15:06

Stephsco said…
If only I had all the time in the world... I've only read Gaiman's Stardust and his collaboration with Terry Pratchett for Good Omens. But my husband has read many of his books, so we consider ourselves fans. He's such a terrific writer.
3 April 2012 at 15:55

Deniz Bevan said…
Thanks for all the lovely comments, everyone!
Ooh, I should have mentioned his wife too. Here's an Amanda Palmer song I love
3 April 2012 at 18:44

Rob and Lisa said…
One of my favorite books ever. Good luck with the challenge.

Janna said…
Came across your blog today as part of the challenge. American Gods is phenomenal. I was first introduce to Gaiman through Good Omens a long time ago, and didn't read American Gods until a year or so. Check out Neverwhere - it's incredibly imaginative.
6 April 2012 at 22:44