A to Z Challenge - Favourite Books - Metroland by Julian Barnes 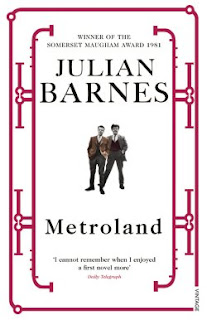 Julian Barnes seems to be a Francophile the way I'm an Anglophile. Every time I read one of his books, with the characters extolling French music or culture or food, I relate to the sentiment and simply replace the object. Oh to be in England, now that April's there.

Have any of you read Julian Barnes' books? I tore through the first ten or so, and even read the seamier, not-as-well-written ones he penned under the name of Dan Kavanagh, but... Everything was ruined for me after I read England, England.

The story was so-so - the concept is that all of English culture is moved to the Isle of Wight, as a sort of theme park - but there's that one chapter... I think it even won an award the year the book was released, for the worst bedroom scene in a novel.

Is it possible to move on and read new books by an author who has left such a sour taste in your mouth? For me, it's been like finding out that a good friend is actually a liar and a cheat. And yet... I still have his last book, Booker-Prize-winning The Sense of an Ending, on my wishlist. I can't let go!

Anonymous said…
This is going on my wish list.

Carol Riggs said…
I haven't heard of this book or Julian Barnes, no! Interesting! But argh, yeah, on the one bad scene. Good analogy on the feeling of sour betrayal. I feel that way about some movies, too (if it just didn't have that ONE scene...).
14 April 2012 at 13:37

stu said…
I sincerely hope it works, since my own published novels are of wildly varying quality. I haven't read Barnes' stuff though, but I vaguely like the Isle of Wight idea. Perhaps it came from that old factoid about everyone in the country being able to fit on it.
14 April 2012 at 18:39

Deniz Bevan said…
I had no idea that scene was coming when I picked up the book, Zan Marie. It really grossed me out.

Sunday all day, Talli! And Monday morning, maybe. Wish it could be longer :-)

If you do read him, Medeia and Carol, make sure it's the older novels from 80s. Those are quite lovely.

I liked the idea lot, stu. I felt he could have done more with the novel...

Hilary Melton-Butcher said…
Hi Deniz .. some great friends read his books - and I really should try one - I will in due course ..

Jemi Fraser said…
I am always so disappointed when I hit an awful scene or book by an author I've liked. I have dropped an author or 2 for that very reason!
15 April 2012 at 13:37

Deniz Bevan said…
Thanks for coming by, Hilary!

Raelyn Barclay said…
I haven't read him but I have heard about that scene before, LOL. I have so many books on my TBR list even if I added Barnes I'm not sure I'd get around to reading him!