espite my love of music and bands, and being wed to a musician, I know next to nothing about the business aspects of music. I've made it my business to learn as much as I can about self-publishing, and about how books are created after they leave the writer's hands (if they're lucky/savvy enough to launch), but music?

Er, you put a song on the net, right?

However, just as I've got authors I turn to for guidance in the traditional scheme of things (hi, Barbara Rogan!) and self-published authors I follow who are paving the way (hi, Kait Nolan!), if I ever needed to know about music and how to do things right, I would turn to Amanda Palmer [NeilcoughGaiman].

Here's Amanda's post about her new Kickstarter project, which is how she's raising money for her next album and tour (and oh so much more - would you like a party at your house?). She's doing everything right - and it's taking hours and hours of work.

Which leads me to today's ROW80 update. The editing is progressing at its usually rate - slow, but steady. But from now on I resolve to stop comparing myself to anyone else.

It took a year and a half to write, edit, beta and re-edit Out of the Water, and so far I've queried ten agents in five months. That's my pace, it seems, so fine. By that light, the fact that I've only been working on Rome, Rhymes and Risk since the last NaNo is - peanuts! I've got months and months to whip the story into shape; why am I aiming to send it to betas by the end of the summer?

Meanwhile, chiming in on the state of publishing as it continues to evolve, here's an essay by the ever-erudite Marilynne Robinson: The Situation in American Writing.

And I've got a handful more photos! This was in Edinburgh... 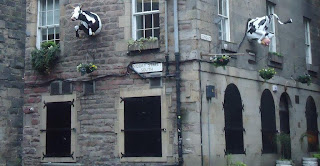 The Elephant House, where Rowling used to write 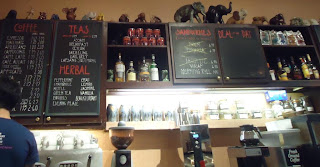 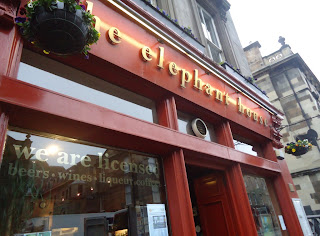 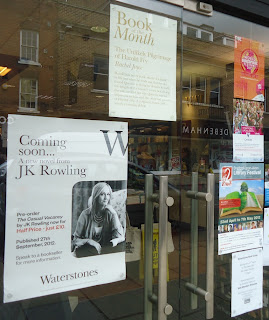 Have you made any writing resolutions lately?

Nadja Notariani said…
Progress is progress. I've had to learn that lesson, myself. It's a dangerous business to compare one's self to others, and never a good idea. Apples and oranges are..well, different. Period.

Glad to hear you're steadily moving forward - but I'd like an agent to snap up 'Out Of The Water'...like today. Sheesh! All I want to do is get my hands on Rosa and Baha's story. Ha!

S.P. Bowers said…
We all have to work at our own pace. I've been working on my current WIP for 3 (yes, THREE) years. I've had some pretty low moments when I hear everyone talking about how they write a book in 4-6 months, but I can't let that discourage me. Yes, I make goals and try to push myself, but I can only be myself, not anyone else. Good luck being you!
23 May 2012 at 10:41

Ten agents in five months sounds completely reasonable to me. Much better than these people who bombard 100 agents all at once.

Carol Riggs said…
Yay for not comparing to other writers. That's bound to cause disappointment and discouragement; we're all on our own timelines. :) Thanks for the fun photos, too--nice to see the place Rowling used to write!
23 May 2012 at 12:20

nutschell said…
Way cool that you got to see where JK Rowling used to write!!!
Nutschell
www.thewritingnut.com
23 May 2012 at 13:05

Golden Eagle said…
Slow and steady wins the race, as they say. :)

Hon, TAKE you time. There is nothing worse than adding additional pressure on yourself. You know your pace, and from what I've seen in your writing, it is the right one for you.

Your work is smooth, polished, and beautifully written. If it takes longer than the "norm"... so be it!

Anonymous said…
It's best not to compare ourselves to others since we all work at different paces. Also, success is not a fast or easy thing.

Glynis Peters said…
Stop comparing ourselves is a good way to go! I am finding my pace and enjoying not feeling I have to keep up all the time.

Kim Switzer said…
Yay! Embracing your own pace and stopping the comparisons to others sounds magnificent! That's the way to be a happy writer. Good for you!

Deniz Bevan said…
Isn't he the coolest? How can you not take a picture of a cow like that? :-)

Aww, thanks for the vote of confidence, Nadja and Jenny! [feels all warm and fuzzy]

Thanks Sara! I get discouraged when I hear about people whipping out short stories by the dozens. I've been going back and forth to the same one for nearly a year!

Thanks LR and Carol!

Thanks for coming by, nutschell!

Great reminder, Medeia - that's the whole point of ROW80, to continually review and revise our goals.

Did I link to your blog by accident, Amanda?

Eden Mabee said…
It's usually more about how we approach a writing project than anything that sets our pace. And then it is timing... It's easy to be excited about the new thing, but to feel overwhelmed and hopeless about the ones that seem to be "hanging around". But the new of the "new" isn't always a good thing... You've got the right idea, Deniz. (And I think your pace looks just perfect!)
26 May 2012 at 14:14

Unknown said…
Well done you with the resolution. I'm thinking about finding a writing partner.
27 May 2012 at 09:17

KM Huber said…
Thanks so much for the interesting links; I especially enjoyed the interview with Marilynne Robinson, whom I have long admired.

Writing reveals our instincts to us, I think, but as you say, it is so easy to compare ourselves, albeit temporarily, with other writers. Good for you for staying with your pace.

Deniz Bevan said…
Thank you for the vote of confidence, Eden!

Hope you link up with a good partner, Carole Anne!