I've been doing a lot of it the past couple of years, for Out of the Water and Rome, Rhymes and Risk, both set c. 1492 in the Mediterranean. (And also quite a bit this past week, as I'm still in the midst of tying up loose ends in Ayten's story.)

I love researching historicals, and learning new things about the time periods my characters happen to be in. Bring on the square brackets!

And keep reading - you never know when something you read, even if it's not directly for research, will lead to an important fact that's relevant for your story. You might also come across weird information. I've listed some of my odd searches before, for Rosa's story and for The Face of A Lion, Austin's story.

Now, here's some what I've Googled or read about in primary and secondary sources for Ayten's story and for my shiny new idea:


Rome, Rhymes and Risk (15th Century):
metalwork and trading
marriage and burial rites
more parts of ships and nautical terms (these never stick in my head)
clothing in fashionable Roman homes
Cem, the exiled brother of Sultan Bayezid
layout of the town of Cadiz
hills and villages on the mainland beyond Cadiz - where would one be taken if one had the misfortune to be kidnapped?
donkeys and horses and mules, oh my! (Adam Heine's got an awesome reference for horse travel times)

...and that's just the beginning! I've also looked up mythical sea creatures. Which is why I'm sharing this image of Cthulhu, especially since I haven't featured him on the blog before: 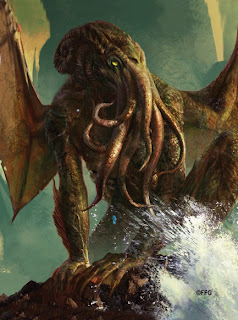 
What crazy things have you investigated?

Misha Gerrick said…
Hmm... probably the most random thing I researched was how to fast-draw a revolver.

S.P. Bowers said…
Obviously I'm doing this wrong. I haven't researched anything too outlandish. Though I did find some new definitions for regular words that I wish I didn't know.
27 June 2012 at 12:51

nutschell said…
Admittedly, I have yet to read Lovecraft. Michael Scott has used Cthulhu in his Secrets of the Immortal Nicolas Flamel Series, i think:)
Nutschell
www.thewritingnut.com
27 June 2012 at 13:35

MTeacress said…
Now there's an ugly fellow. He reminds me of a character from the Pirate's of the Caribbean movies.

I've researched several odd things, but I can't remember anything too odd just now. The last thing I researched was about throwing salt over your shoulder to ward off the devil...
27 June 2012 at 17:45

Romance Book Haven said…
I was writing a medical romance and researched all sorts of weird things- medical
27 June 2012 at 17:59

Denise Covey said…
I don't know about crazy things Deniz, but I adore research - my favourite part of writing. I've researched the Taliban and the muhajadeen in Afghanistan and that's a bit crazy, but my research on the cranberry farmers on Nantucket was much less weird.

Anne Gallagher recently shared how she spends more time researching her Regency Romances than writing them. She was a guest poster for RomanticFridayWriters.

Melissa said…
The research can be a pain, but mostly I find it interesting.

Melanie Macek said…
I think the most interesting thing I've researched to date is the Underground Railroad routes through the northwest and symbols used to mark stops on the railroad.

I easily get lost in the research aspect because I've always loved learning those random factoids that make people look at you funny. :)

Deniz Bevan said…
I haven't read Lovecraft yet either, Joshua and Nutschell! He's on the wishlist...

But silkies *are* interesting, Sara!

Any other folk beliefs, Michelle?

Thanks, Denise, I saw that guest post! I've got a list of 35 blog posts I missed while on vacation that I'd still love to visit!

Nice to see you too, Melissa!

I've looked up so much weird stuff. Researching prosthetic eyes led to some interesting pictures.
7 July 2012 at 22:20