J. K. Rowling's The Casual Vacancy, and An Accomplishment or Two

owling's newest novel, The Casual Vacancy, isn't as different from Harry Potter as people think it might be.

I forgot who the author was while reading - something that actually didn't happen the first time I read Harry Potter and the Order of the Phoenix, because I'd slipped and caught a brief part of a review that averred that all Harry did was get angry all the time. So I was very glad to have avoided all spoilers before reading the latest Rowling.


Don't read this post above the line of stars if you want to avoid spoilers, too! 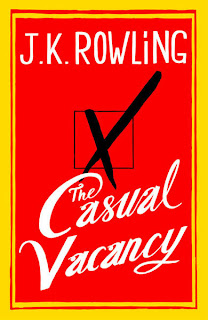 Omniscient narrative isn't everyone's cup of tea, but I love it when it's done well, as Christopher Brookmyre does in Pandaemonium and Rowling does in The Casual Vacancy. There was one specific instance, which I'll go into in more detail during a Virtual Surrey workshop, where the narrative follows a group of characters full circle, and then comes back - with an extra bang of revelation - to the character who opened the chapter.

I must admit, I've had a couple of people say things to me like "what's she peddling now, doesn't she have enough dough?" Obviously such snark has not come from writers, who realise how lucky they are if the ideas continue to flow. The New York Times reviewer, especially, has some particularly schadenfreude-driven comments to make. The site no longer accepts comments, so I'm distilling a few of my reactions here, having devoured the book in a couple of days - Rowling has always been deft at pacing.

"There is no magic in this book", the reviewer says, having missed completely the magic of children who, despite being slapped in the face time and again with their parents' failings and failures, still manage to find hope in the world, still seek an adult to trust and emulate.

"...this novel for adults is filled with... self-absorbed, small-minded, snobbish and judgmental folks, whose stories neither engage nor transport us." Methinks the reviewer might have recognised himself in Rowling's latest cast of characters. His opinion that the "real-life world she has limned in these pages is... dull" strikes me as rather a feeble protest. I'd be interested in going back to see what the New York Times has had to say about Jonathan Franzen's The Corrections over the years. Now there were some dull characters, hiding behind clouds of self-delusion and prescription pills. Stuart Wall, one of Rowling's main characters, is on an unending quest for a Holden Caulfield-like authenticity, and his creator seems to have heaps more of it than Franzen did.

In the same breath, the reviewer goes on to note that the book features "alarming scenes of violent domestic abuse." Alarming? Where on this planet does he live?

"Instead of an appreciation for the courage, perseverance, loyalty and sense of duty that people are capable of, we are left with a dismaying sense of human weakness, selfishness and gossipy stupidity." So, just another glimpse of reality, then. Not to mention that he seems to have skipped every part of the book that dealt with Krystal Weedon, who was made up of equal parts courage, perseverance, loyalty, and a sense of duty.

The reviewers most unforgivable comment, though, comes when he says that in the Harry Potter series "the civil war was literally between good and evil; here, it is between petty, gossip-minded liberals and conservatives." He's basically implying that supernatural elements make people's lives worthwhile, but without magical powers, real life is hardly worth the trouble to be good.

The Guardian reviewer, meanwhile, though generally positive, notes that "the inhabitants of Pagford – shopkeepers, curtain-twitchers, Daily Mail-readers – are mostly hateful Muggles, more realistic versions of the Dursleys, the awful family who keep poor Harry stashed in the cupboard under the stairs. The book has already been dubbed Mugglemarch." How quickly people forget. There were curtain-twitchers and hateful folk among the witches and wizards too. Let's not ignore Harry's other scar - I must not tell lies - and the witches and wizards responsible for it.

I'm not sure where the reviewer gets the idea that Krystal and the others in her neighbourhood "use a kind of generalised, Dickensian lower-order-speak, that owes more to written convention than anything real: "I takes Robbie to the nurs'ry"; "Tha's norra fuckin' crime"; "No, shurrup, righ'?"" - I've heard people speaking like this. You don't have to go far from your Guardian offices at King's Cross, Mr. Reviewer, if you want to hear the same. Just take the Tube to the end of the line somewhere, someday.

Finally, the reviewer ends with this probable reason for why the Harry Potter books have been so popular: "people still enjoy reading about good people, and seeing them rewarded." Right, and then they can go back to their mean-spirited, petty, selfish lives? Good on Rowling for not mincing words. Nearly 15 years later than his book, she's accomplished all of what Julian Barnes tried to do in England, England.

I accomplished something on Monday!

Woke up out of a dream with another story idea and for once had the time - day off for Canadian Thanksgiving - and the space in which to sit down and write it. So here's what I managed to do, all for the very first time:

Kinda derailed my ROW80 goals for a moment there, but I'm not complaining! Now I just have to edit the story. Printed, of course. Heh.

Speaking of new stories, you can still vote over at WRiTE CLUB. And look! New Tolkien! Gotta love your favourite author when, 40 years after his passing, he's still got new releases coming out. I wonder why they waited so long with this one?

"HarperCollins has announced the acquisition of Tolkien's never-before-published poem The Fall of Arthur, which will be released for the first time next May. ... These are the 'new' poem's opening lines:

'Arthur eastward in arms purposed
his war to wage on the wild marches,
over seas sailing to Saxon lands,
from the Roman realm ruin defending.
Thus the tides of time to turn backward
and the heathen to humble, his hope urged him,
that with harrying ships they should hunt no more
on the shining shores and shallow waters
of South Britain, booty seeking.'"

Which books have you gotten excited about lately?

Malcolm R. Campbell said…
This is a perfectly fairminded review of a book that critics seemed to have enjoyed panning. I suppose they dislike Rowling for her weath and success and want to knock her off her pedastle. I'm reading the book now, and find it very well done with its magic of normal life in a small town.

Zan Marie said…
How good for you to get a complete story in one day, Deniz! Wow!

Theresa Milstein said…
Thanks for making your spoiler line clear! I really don't undertand how people could expect his to be Harry Potter when it clearly has no intention to be.

I have an omniscient POV YA manuscript with readers right now. Good to know JK Rowling uses that POV too. Just like with adverbs, if it's good enough for her...
10 October 2012 at 09:21

Laurel Garver said…
Thanks for the spolier warning so I could skip ahead. I love how you were able to see continuities in the themes Rowling explores. I agree that in the HP series she does tackle everyday pettiness and cruelty in both the muggle and wizarding worlds. Bravo!
10 October 2012 at 09:48

S.P. Bowers said…
Hmmm, I've been trying to decide if I want to read the new Rowling book.

Romance Reader said…
I've seen this book being slammed all over yet you hit the nail on the head Deniz.

Readers who read and understand what the author intended to convey are truly rare.

Alex J. Cavanaugh said…
L. Ron Hubbard has been putting out books for years from beyond the grave.
Most of the posts I've seen about Rowling's new book have been positive.
And almost six thousand words in one day? Takes me a whole week to do that!
10 October 2012 at 17:17

Denise Covey said…
Hi Deniz. Well done for what I read. One of my students is loaning me the book next week so I avoided the bottom half of your post. Thanks for the warning re spoilers.
Great review.
10 October 2012 at 21:45

Hilary Melton-Butcher said…
Hi Deniz .. thanks for this - I'd read the depressing reviews and wondered - so I'm very glad to get your more upbeat and pertinent review of Rowling's latest ... I never quite got into Harry Potter - I guess not having children guided that aspect!

I'll definitely bear in mind this post and hope one day I get to read Rowling's latest ...

Congratulations on getting so much done ... and I have something to write about re Tolkein ... I didn't take notes that day (so not sure how much I can remember) ...

Talli Roland said…
Interesting to get your thoughts on JK's latest - I've heard so much about it from the critics!
11 October 2012 at 09:25

Golden Eagle said…
Afraid I skipped your review--I have the book on hold at the library and want to avoid knowing a lot about the book before reading it. :P

Gwen Gardner said…
I need to get the Casual Vacancy! I didn't read your review, but I've heard conflicting information about whether it was good or not.

Also, you go girl for writing a story at one sitting and not going on the internet! I struggle with that so much!
11 October 2012 at 20:51

Lynda R Young as Elle Cardy said…
I think Rowling was quite courageous to write this book. It would be hard not to shy away from stepping out from HP's shadow.

Michael Di Gesu said…
Thanks for the review Deniz,

I can't wait to read this book. I am a HUGE Rowling fan and I sure this story will be written with honesty and heart just like the HP stories..

Thanks, mood and Nas!

Has he, Alex? And yea, if I could do 6000 words a day more often I'd probably self-publish three books a year...

Hope you like the book when you read it, Denise and Hilary and Eagle!

I almost forgot it was coming out, Talli, but I had to buy a present off Amazon, and of course I wanted to spend 25$ so I could get free shipping...

Thanks Gwen - hopefully it's the start of a new not-checking-the-internet-too-often trend...

Jemi Fraser said…
I haven't read the new Rowling book yet, but I'm appalled by the ridiculous reviews I've heard. She warned everyone this was no HP book, but some refused to listen and then complain because it's not another HP book *sigh*