A New Sherlock Holmes Collection!, YA Competition, Minimising to 100 Things

herlock Holmes and Dr Watson are back!

Sort of. I read the original Sir Arthur Conan Doyle stories for the first time a few years ago and then last month I read Anthony Horowitz's The House of Silk, the first ever Holmes novel approved by the Doyle Estate.

And this week I got to read this: 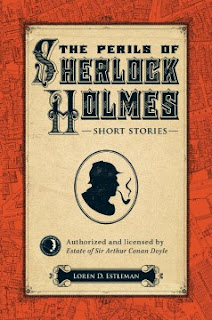 The Perils of Sherlock Holmes by Loren D. Estleman

I had a great time reading these stories. The voices are true to the original characters and the adventures are intriguing and exciting. Holmes in the old West with Wyatt Earp! A riddle from Holmes' apiculturist years! And "The Serpent's Egg", which was written as the first chapter in a round-robin Holmes novel. Other authors, including Isaac Asimov, were linked to the project, but unfortunately it was never completed. The chapter ends with a tantalising mystery involving druids.

I thought of my own Druid's Moon right away, and wondered if I could include a worthy Holmes reference.

Now I feel like reading Estleman's Sherlock Holmes vs. Dracula, or The Adventure of the Sanguinary Count, as well as the stories written by Doyle's son and John Dickson Carr. And seeing the films, the new ones, which I haven't seen yet!

Ignoring my ever-expanding library for the moment, I found this idea intriguing: cutting back to 100 things. Although I've just read the blog post of a Guy Named Dave, who's hosting the latest 100 Thing Challenge, as featured in Time, and here are the items that are excluded:

Stuff that's shared between you and other family members; non-personal stuff, like dishes, cleaning supplies, etc.; books; and tools. Also, collections count as one item.

That's a relief but even so, 100 things? Counting furniture and mementoes and photograph albums and the bins full of all my drafts, not to mention every article of clothing? I'll have to think about it. First things first, buying more bins to sort out of the library and garage, so that everything looks tidy and there's no more stuff-behind-other-stuff and I can see exactly what we have. When I think of advanced minimalism like this, I'm always glad we live in a triplex and not a house.

Would you be able to declutter that far?

Young Adult Novel Discovery Competition! Hosted by the Serendipity Literary Agency, in collaboration with Sourcebooks and Gotham Writers' Workshop. Submit the title and first 250 words of your story for a chance to win "a one-on-one consultation with one of New York's leading YA literary agents."

Duff McKagan is in the UK apparently, and wrote a blog post the other day on English vocabulary. I liked his take on asking for directions in England:


"Now when you need directions in England, Wales, or Scotland, don't expect to hear anything close to "Just go down two blocks and make a right." No, the directions from a local in, say, Plymouth, England, will take the form of the more poetic (but way less informative) "Carry on down the road, and it's just there." That sounds nicer, but can leave an uninformed outsider like myself cold and lost in the rain."

I've got a mini rant: why is it that the use of vocabulary outside the norm earns you nasty looks? If I'm interested in something (in this it was singing in the round, which I really like to listen to), I like to find out more about it, and if there's a specific vocabulary associated with it (in this case, canon), well, why shouldn't I use it? If the person I'm talking to doesn't understand the word, why don't they just ask what it means or go look it up later, rather than giving me a dirty look and a rude "huh?" Rant over.

I remembered this Sendak book today. I used to reread it all the time when I was a kid: 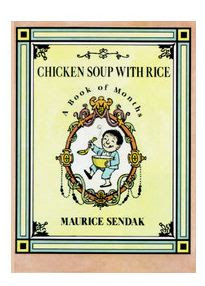 And updates! This month, my ROW80 goals are my NaNo ones. So far I've been hitting or surpassing the daily NaNo requirement of 1667 words. I really hope I can keep up this momentum.


Are you having a good writing week? What have you read, reread or watched lately?

These new Holmes stories sound intriguing - I didn't even know they existed but as they're approved by the Doyle estate I may just have a gander too! Druids?!?! Elementary my dear Watson! LOL!

Good luck with your Nano-ing!!!

The Daring Novelist said…
I suspect the greatest value of the "100 things" meme is that it makes you look twice at everything.

Kind of like a "what if I had to move into living quarters half or a quarter of the size I have now?"

However, I do think it's a misguided meme, in that it's aimed at "simple living" except one of the things you need for simple living are tools.
4 November 2012 at 10:47

Unknown said…
I love Sherlock Holmes and will definitely have to check out these books. Thank you for sharing them!

Lena Corazon said…
The concept of Sherlock Holmes in the wild west sounds AMAZING. I will definitely have to check all of that out!

Great job with the writing, Deniz, and thanks for sharing all these awesome links. I'll be checking them out today.
4 November 2012 at 13:26

Anonymous said…
My husband and two daughters used to watch Sherlock Holmes every Saturday night. Then one Sunday morning they both got up with sad faces and told me that Sherlock Holmes had fallen off a cliff and died. It was the end of a series and, sadly, the end of a father-daughter(s) bonding moment as well. Thanks for sharing so much good stuff today, Deniz. :)
4 November 2012 at 17:29

Jae said…
I love that you posted that YA link. I'm always looking for contests to try my novel out in. Thanks so much for posting it! :D
5 November 2012 at 12:23

Anonymous said…
Ah timing. Was just talking to the hubby yesterday about reorganizing/decluttering. It's been driving me crazy and mine isn't really that bad. I'm to the point that I'm tired of dealing with it.

I agree with your rant. I had a word in my story that I knew would cause slight confusion, but I left it in because there are these things called dictionaries. Sorry, sarcastic, but I'm frustrated by the dumbing down of things in general. Whenever I didn't know what something meant I asked or grabbed a dictionary and figured it out. I think these different turns of phrase are what make each local and person unique.

You're right, Camille - I like that exercise of reconsidering each possession.

Ooh, thanks for that idea Linda - I haven't watched the series either!

I hope so Trisha because I'd definitely count my library as one thing!

Hilary Melton-Butcher said…
Hi Deniz .. a friend I just stayed with had the new SH to read, and now you've highlighted so many other aspects .. I can see useful Christmas present ideas here ..

I'm always looking words up - and I do use long words ... I've no idea why or how - they're just part of me .. I'm sure I baffle people, and try and elaborate around it when I realise what I've done.

I turned up at someone's house down in Cornwall .. and they said how - you must have GPS ... I said no - my nose and common sense!!! I thought I'd give up in Chichester when I was seeing said friend .. but managed to get to their front door .. through the barrier et al - they'd given me the code!

Love the chicken soup video - hadn't seen that before .. Tammy's voice is enticing ...