I think I've forgotten how to blog.

Between the nearly full week of illness, coming as it did following the holidays, during which I had a lot of wonderfully scheduled-in-advance posts, and the trying to keep to my editing schedule despite the illness, I've lost the knack of blabbing on the blog.

Though I am pleased to report that the editing is progressing on Druid's Moon. Haltingly in some cases - I might have hit the dreaded middle - but soon the Beast shall be revealed to Beauty, and then there will be lots of dialogue and interaction and "what do we do now" conversations to play with. Then the finale, and then the denouement (which I don't think I've written yet!). Hoping to be ready to write the synopsis by end-February.

About the only thing I could hold up while ill (didn't even read until the third day, I was that weak) was my iPod, so I was on Twitter quite a bit. Yes, there were cat photos. Thank you for all your comments on my last post! So nice to have your good wishes. I'm looking forward to visiting everyone and catching up!

One lovely thing that happened while I was ill is that I was accepted for something I'd applied for a few weeks ago: the CANSCAIP Creator-in-Residence Manuscript Blue Pencil. It's a little different that the usual mentorship programme, since there were only twelve spots offered, and at no charge! The only thing is, CANSCAIP is the children's authors' association, and I submitted my MG/YA. Now I have to take off my romance (and paranormal) editing hat and put on my children's author hat - and return to a story I haven't quite looked at in a few years. I just know it's not as good as it could be!

But then, what do I know, really? I haven't had coffee in six days... I miss it so much I'm bringing back this image from an old blog post on mugs: 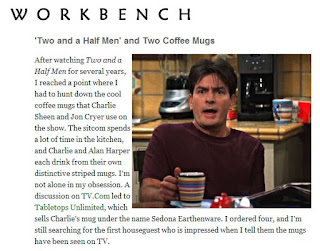 Yup, that's Charlie on the old Two and a Half Men. Judging by the blog post I got the image from, I'm not the only one interested in those bottomless mugs. At least, they seem bottomless when you're watching the show: He always uses the same one, there's always fresh coffee in the pot, and when he's not drinking alcohol, he's sipping coffee. Yum yum!

J.L. Murphey said…
Welcome back Deniz! You haven't forgotten how to blog...you did excellent.

Alex J. Cavanaugh said…
I haven't had coffee in over thirty years! (One sip was all it took.)
Congratulations and hope you can switch mentally between the genres.
16 January 2013 at 08:52

Michael Offutt, Phantom Reader said…
I love coffee. I drink it on a daily basis. io9 recently did an article titled "why drinking coffee makes you go poop."
16 January 2013 at 14:36

Romance Book Haven said…
The holidays have messed up a lot of schedules. Don't worry, you'll get back. Happy New Year.

I hope this means good things for Austen and Kedi. Good luck.

Denise Covey said…
Deniz, I'm so sorry you've been ill. And no coffee! Gadzerks! I hope you've got yourself a bottomless mug by now.
Congrats on your CANSCAIP editing thingso. Will be a great experience.

Tia Bach said…
I'm tackling the Beast right now, and I can't wait for the Beauty to start shining through!

Congrats on the Blue Pencil (all of the title my brain could remember!) gig!

And, yes, I'd love a bottomless mug (of inspiration).

Carrie-Anne said…
Congratulations on making it into the mentorship program! I'd love an opportunity like that.
17 January 2013 at 14:53

Hilary Melton-Butcher said…
Hi Deniz .. well I didn't want to do anything .. not read, not watch tv, not look at a computer screen .. or the phone ... I just collosped! in bed and occasionally listened to the radio ...

So glad you're feeling better though and good luck with the editing - keep on at it .. congratulations on the mentorship programme - sounds very interesting .. cheers Hilary
18 January 2013 at 12:48

Deniz Bevan said…
Thanks so much everyone!

I think your blogging is great, Jo, I always look forward to your posts!

NO COFFEE? How do you live, Alex? Wow, you really are a ninja. Coffee tastes soooo good. I keep trying to like tea, but it just doesn't taste the same.