A is for Astronaut

Specifically, Canadian astronaut Commander Hadfield, who is on a six-month trip to the International Space Station.

They're doing all sorts of experiments and work up there, but in between, Hadfield tweets! From space!

He shares with us details of the science they're doing on the ISS, records music (including singing during Orthodox Christmas with the Russian astronauts), takes pictures, and talks to school groups, the Barenaked Ladies, Bryan Adams, and even William Shatner!

Here he is with the Barenaked Ladies on CBC: 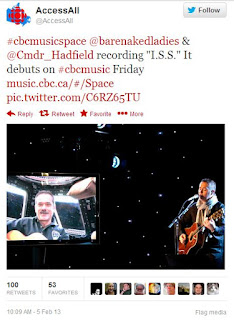 Fellow blogger Jemi Fraser said it best when she nominated him for a Shorty Award "in #science because his tweets make us all wonder, imagine, think and hope."

I shared his Montreal photo on the night that hockey came back.

When he celebrated unofficial Canada Day, the Whisky Trench Riders sent him a song!

Hadfield's also shared photos of Turkey, and NYC, among other places: 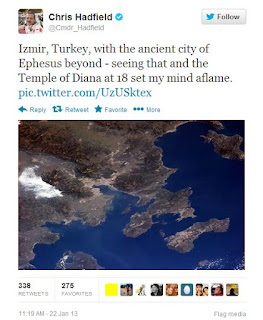 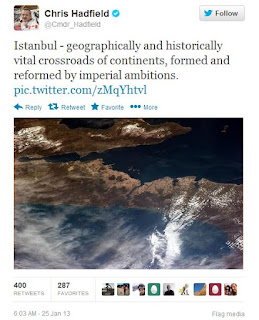 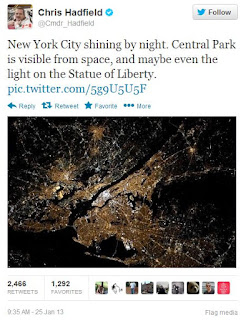 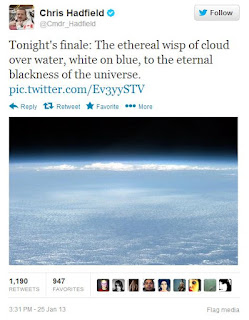 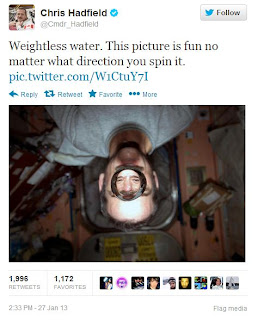 And finally... an odd blank space in Africa that he invited us to fill. This guy had a particularly cute reply: 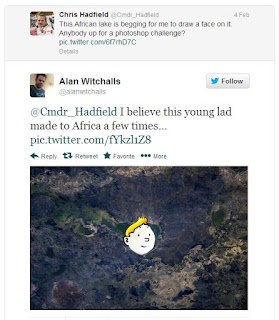 Have you seen his pictures? Which ones did you like? He takes requests!

Hilary Melton-Butcher said…
Hi Deniz ... what a great start to the A-Z - and the fact that he's doing so much for others and testing us ..... I'd hate to do that trip - so cramped and for so long - yes lots to see and learn ..

Arlee Bird said…
I'd hadn't heard of Hadfield, but it's pretty cool what he's doing. You'd never find me in the confined quarters of one of those space vehicles.

Thanks for being a "Minion"!

Lee
Wrote By Rote
An A to Z Co-host blog

EvalinaMaria said…
Great choice for A and a great start with the challenge!

S.A. Larsenッ said…
Great, great word and subject!! One of my kiddos went on a field trip to our State's center that honors the fallen Challenger astronauts. I was a chaperon. While there, they mentioned Commander Hadfield!

Jeff Hargett said…
I would have been very happy to have chosen a path toward the stars. Space has always fascinated me. Nice pick!
1 April 2013 at 17:44

Anonymous said…
Good luck with A to Z!

Anonymous said…
Ok now I need to follow him! When I grow up, I want to be an astronaut. Shame many kids won't say that anymore.

Julia Phillips Smith said…
Those were great! Thanks for collecting them all here. I haven't had time to follow Chris Hadfield on Twitter, though I'm friends with a few Chris Hadfield groupies who comment about his tweets on Facebook.
1 April 2013 at 21:52

Silvia Writes said…
Way interesting. Not familiar with the name, but I'm happy to have learned of him.
Silvia @ Silvia Writes
1 April 2013 at 22:08

Unknown said…
I love the duet with Barenaked Ladies. This guy knows how to work the people of the Internet. If he can't get more funding for NASA, no one can.

javediqbal said…
This comment has been removed by a blog administrator.
2 April 2013 at 07:45

Unknown said…
I had no idea he was doing this! As a homeschooling mom, you have given me a whole new project for this summer!
2 April 2013 at 07:54