ROW80 and Houseparty Wrap-up, New Novak and Other Books, and Raccoons!

nd of this round of ROW80! I'm proud to be an ROW80er (and thanks to everyone who helped with the fundraiser for Lauralynn!).

I shuffled my goals around quite a bit, but the idea was always to edit something. And I didn't do much of that. Last week, though, I was writing again!

All thanks to the party we held over on the Forum: Writers' Houseparty Night at the Museum.

There's no way to describe the madness and emotions that result from that, our 12th Houseparty to date (here's a list of all houseparties that have come before).

I'm looking forward to reading our party story all over again this weekend (all 198,000 words of it. No, I am not making up that number. The length of two long novels (or one Diana Gabaldon novel), all written by a handful of authors), and pulling out all the interesting revelations and scenes on my characters, for use while editing my actual novel, Druid's Moon.

Here are some fun Houseparty statistics:

# of participating authors : 17
# of official characters: 44 (plus assorted crew from the Endeavour)
(including Kedi the non-cat cat and Siri the non-dove dove)
# of unofficial characters: 2 (Gizwyck and Cthulhu)
# of explosions/crashes: 2 (plus 1 volcano and 1 flood)
# of those caused by the Endeavour: 2 (well, its author wouldn't have crashed the ship into the roof. I did that so I could separate Lyne and Frederick for a while, while Frederick was temporarily the Beast)
# of casualties: 1 kick by a kangaroo, 1 koala fed to a dinosaur, and 1 leg stolen from Oscar Pistorius
# of MandMs fed to Cthulhu: unknown
# of references to famous authors: 2 covert mentions of Neil Gaiman's new novel The Ocean at the End of the Lane

Everyone is welcome to participate in these! Zan Marie and I are thinking of hosting another one in December. We shall see (a week of no-holds-barred creation and interaction takes a lot out of the participants. We'll be having about another week or so this time around of debriefing and decompressing before the hangover subsides).

Here's Kedi, by the way: 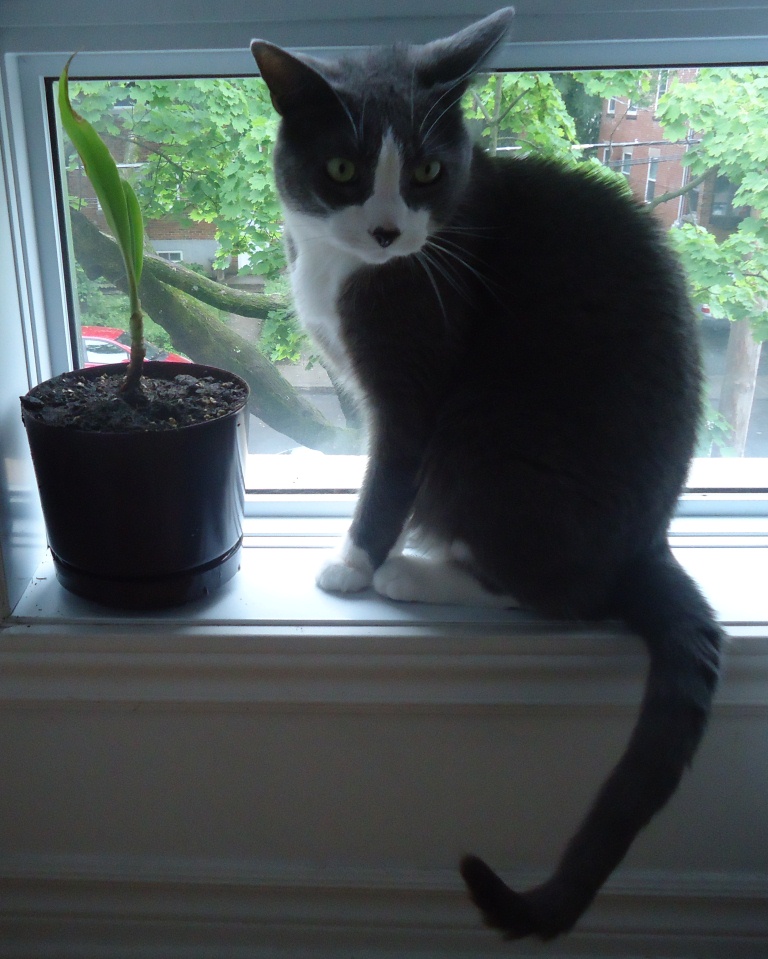 I am really looking forward to that new Neil book. Especially because he's coming to Montreal in August! Spent two hours yesterday trekking up to a neighbourhood on the other side of the mountain (walking and by bus, and then a bus across the mountain home) to get my tickets. 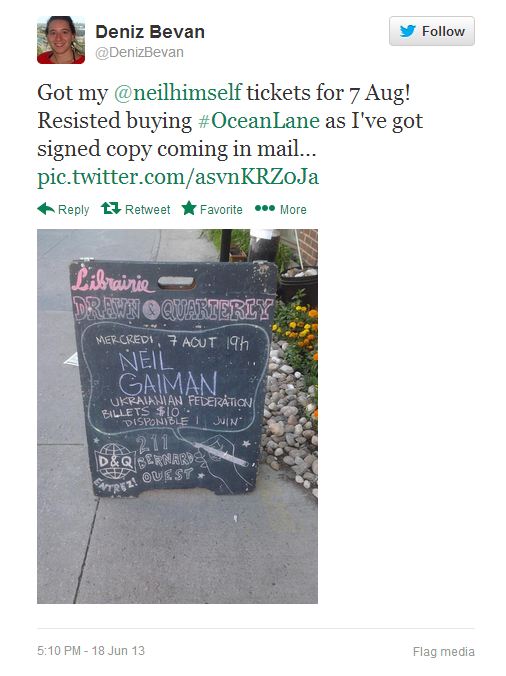 Luckily I've got lots of other books to tide me over:

Got to read the latest Brenda Novak this week, Home to Whiskey Creek. 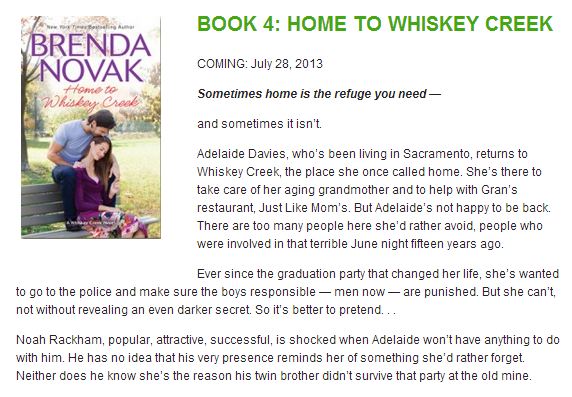 I love reading stories about small towns, so that even if each novel is about two new characters, you get to catch up on the stories of characters you've met before. Whiskey Creek being the small town that it is, the group of friends whose stories the books cover are in and out of each other's lives constantly, but you get a different point of view (and a different romance!) with each book.

If I had to criticise anything, I'd say there was a bit too much 'tell' in this story (but maybe I'm oversensitive because I'm in editing mode). The editing felt a little too rushed as well; I'd have preferred a slower denouement, so I could really absorb the consequences of what happened, and kind of enjoy having the hero and heroine finally being together.

The characters are very well defined, though, almost from the moment they appear on the page. I haven't visited California yet, but feel like I could drive straight into a place called Whiskey Creek and know where to go, and who to talk with!

Lots of other books going on, too. All the Budge Wilson books I ordered secondhand have started to come in, I picked up the anniversary edition of Fahrenheit 451 while I was buying the Neil tickets (because Neil's got an introduction), and two fundraiser gifts arrived the other day, from the Lowell Observatory and Sherlockology (who are attempting to save Sir Arthur Conan Doyle's house, Undershaw, from becoming another in a long line of ancient homes renovated into condos): 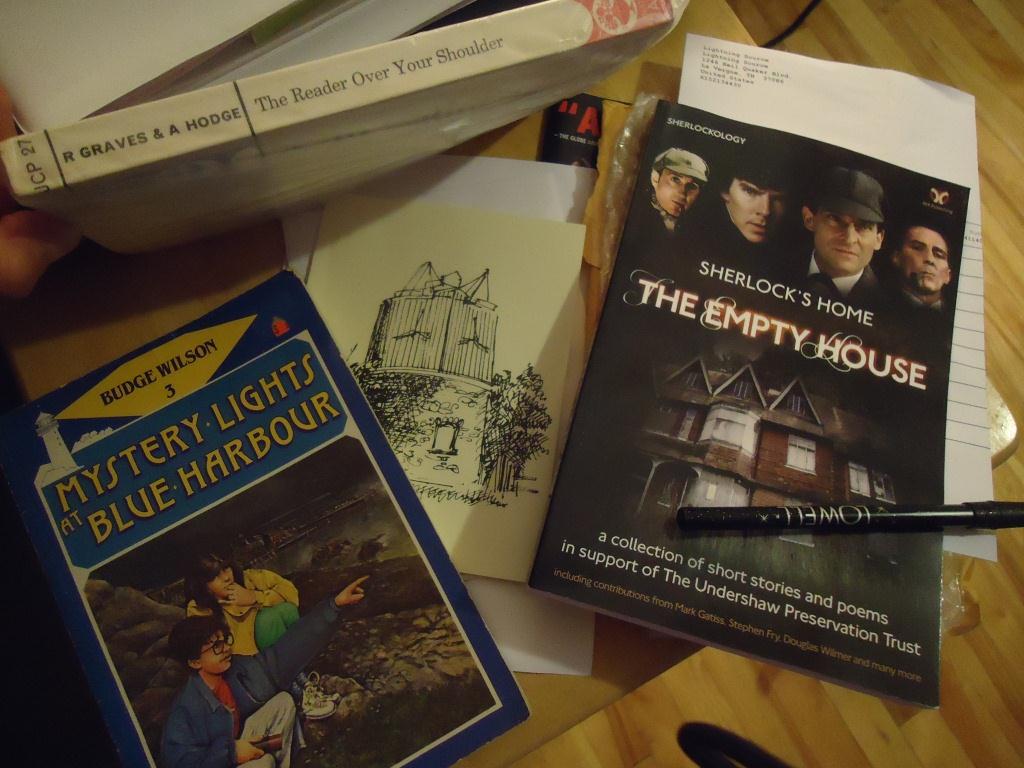 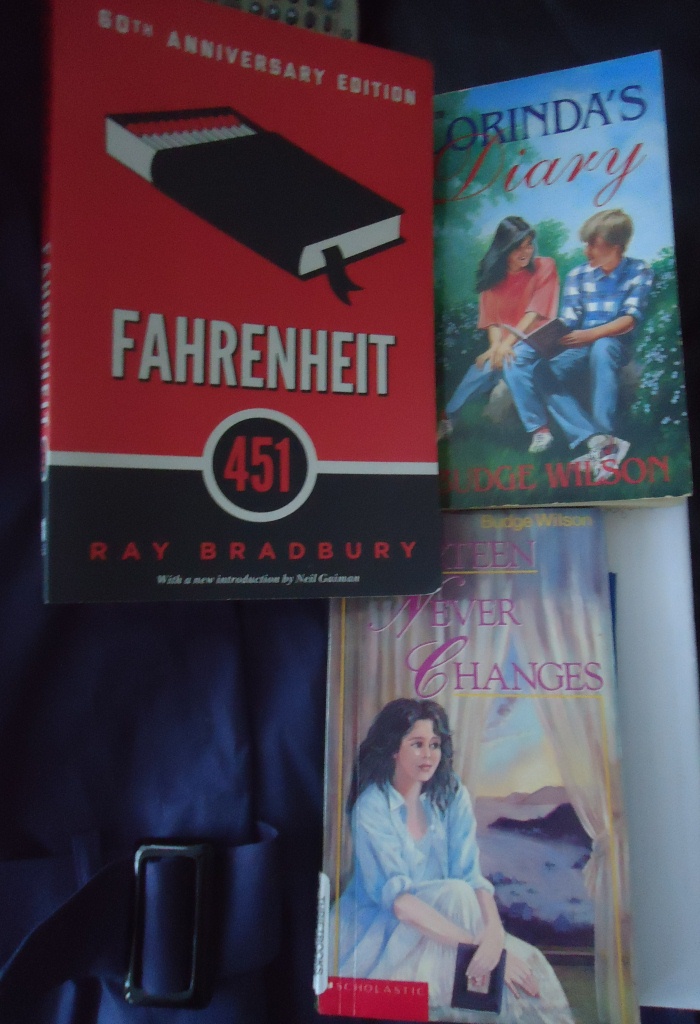 A couple of days ago we celebrated Blumesday, the day after Bloomsday, and I'm thinking it's time I read a Judy Blume book I haven't yet: Tiger Eyes, which her son is currently turning into a movie.

In other exciting news, Kristen Callihan has a novella coming out in November! And Talli Roland and a group of lovely authors have launched Notting Hill Press! The Curators of the Cabinet of Curiosities have a book coming! If you're lucky enough to live in Wales, there are some neat events going on to do with naturalist Alfred Russel Wallace. And... Tolkien!

I can't go long without some Tolkien news. I've been culling all the items I've favourited on Twitter since the A to Z Challenge ended, and some of the best include a letter by Tolkien, an anecdote about Tolkien and elephants, and a few images: 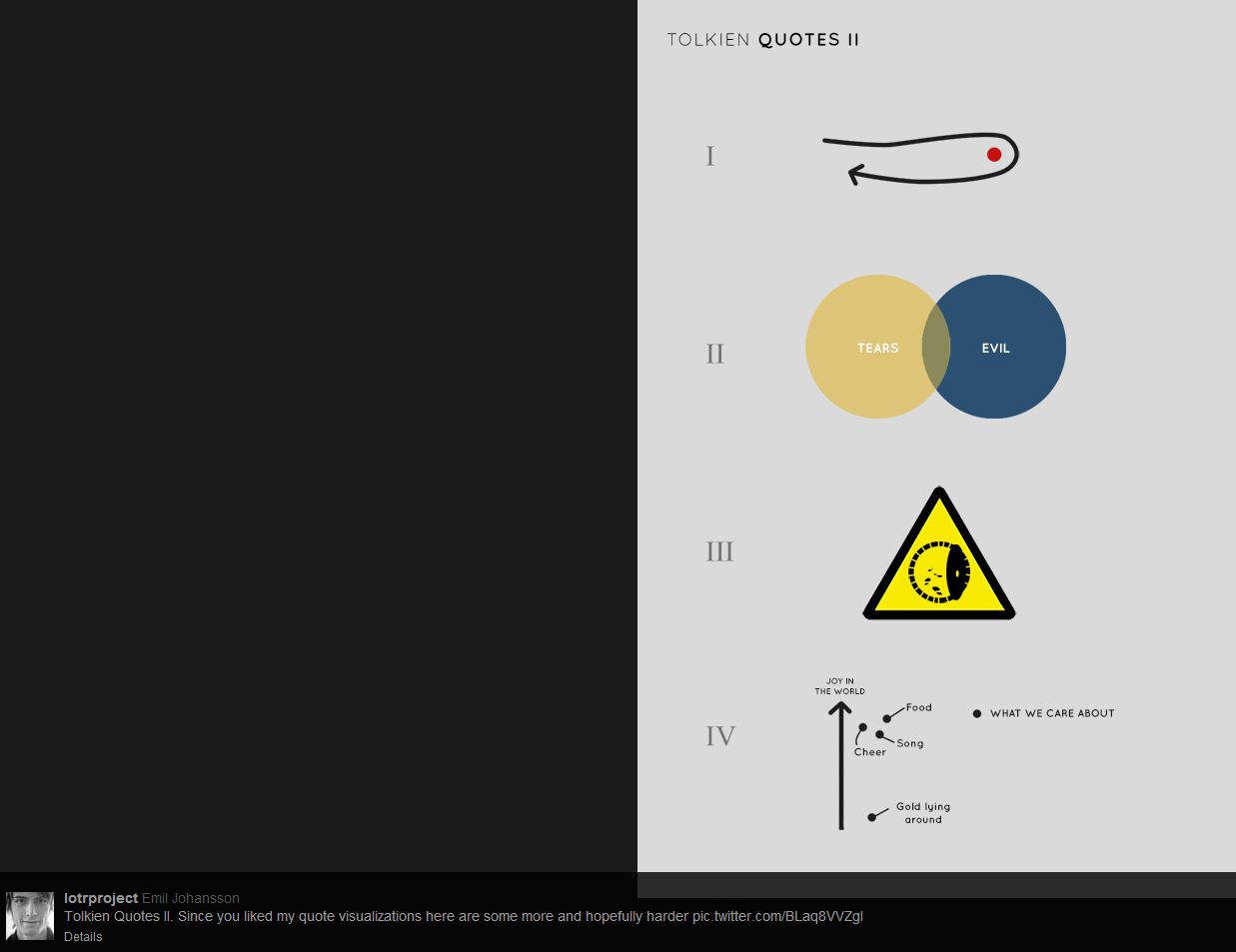 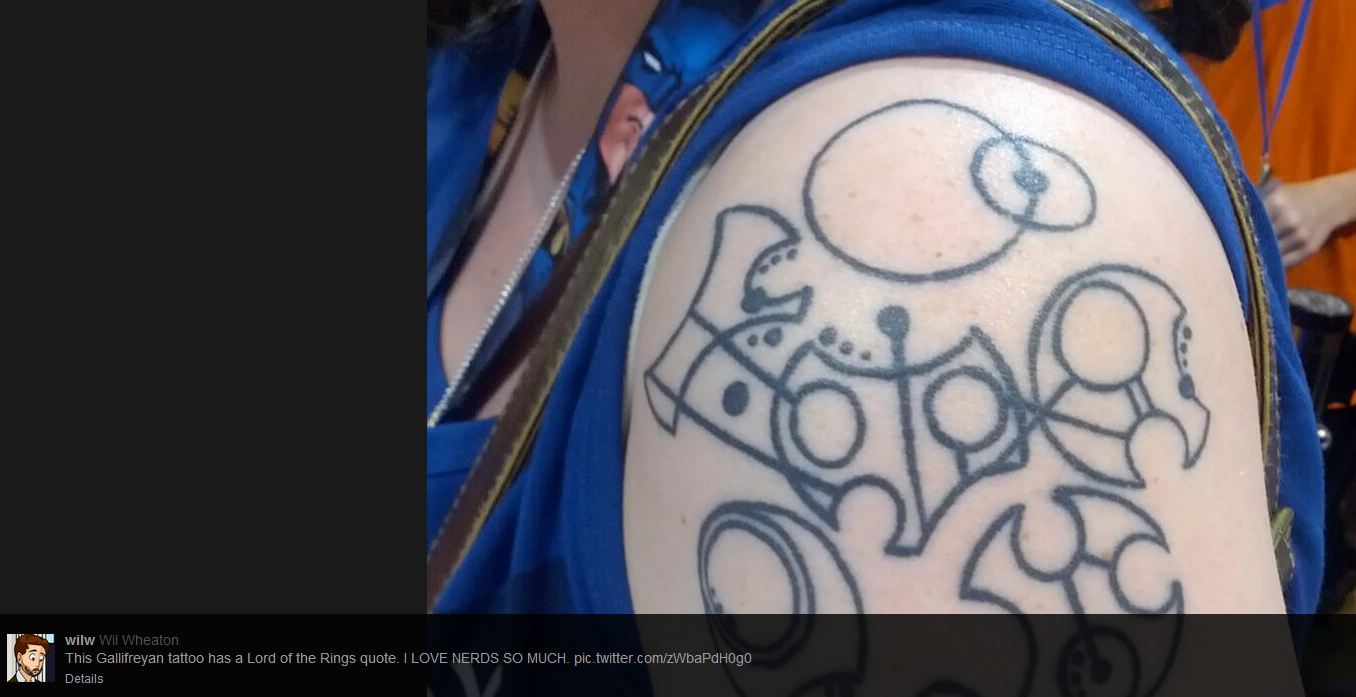 A Gallifreyan tattoo with a Lord of the Rings quote. I don't understand this one. Can someone help? 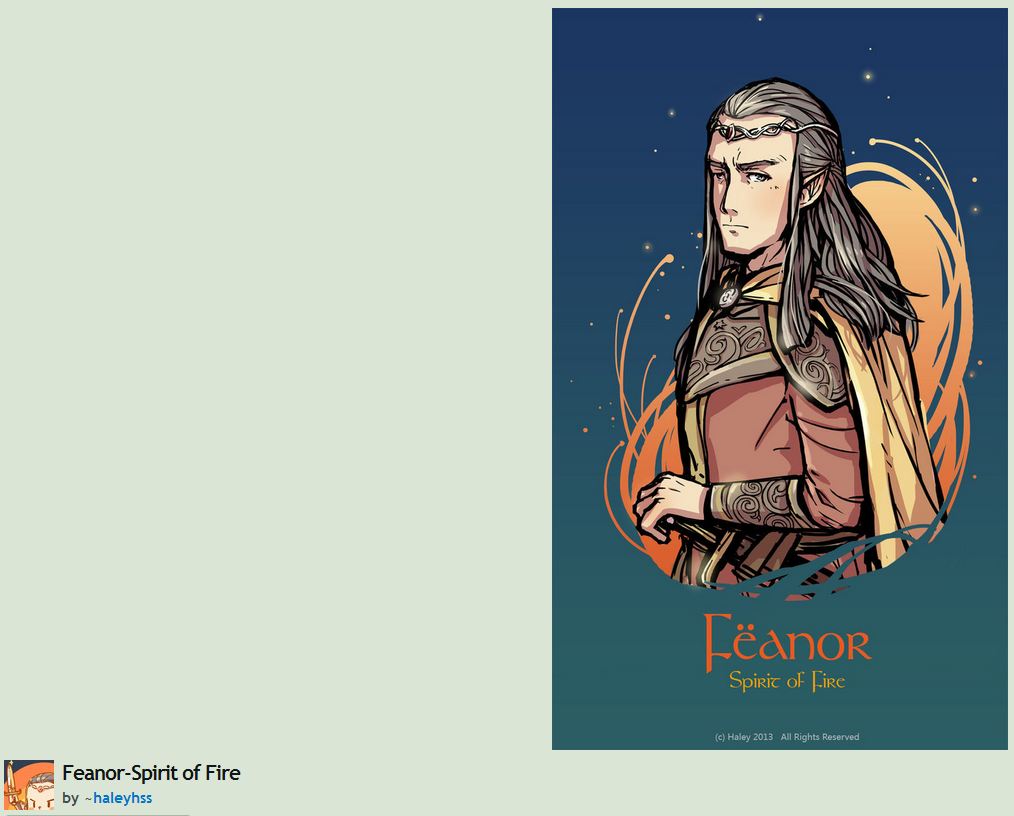 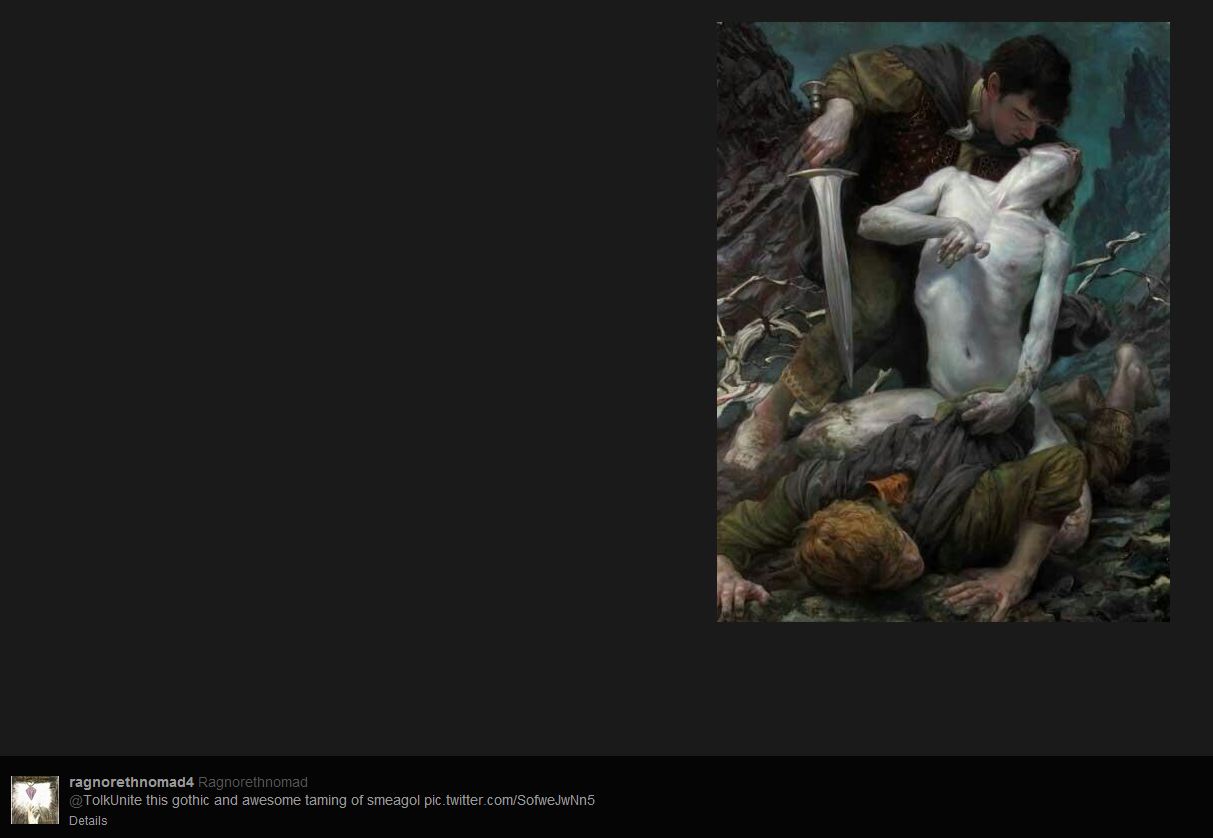 I saw these little guys on the street the other day, but haven't seen them since. Tried to call the city to find out if I should do anything for them, but after waiting on hold for ten minutes, I gave up. If we'd lived just a little closer I might have tried feeding them, but I hope they're surviving in the city/wild! 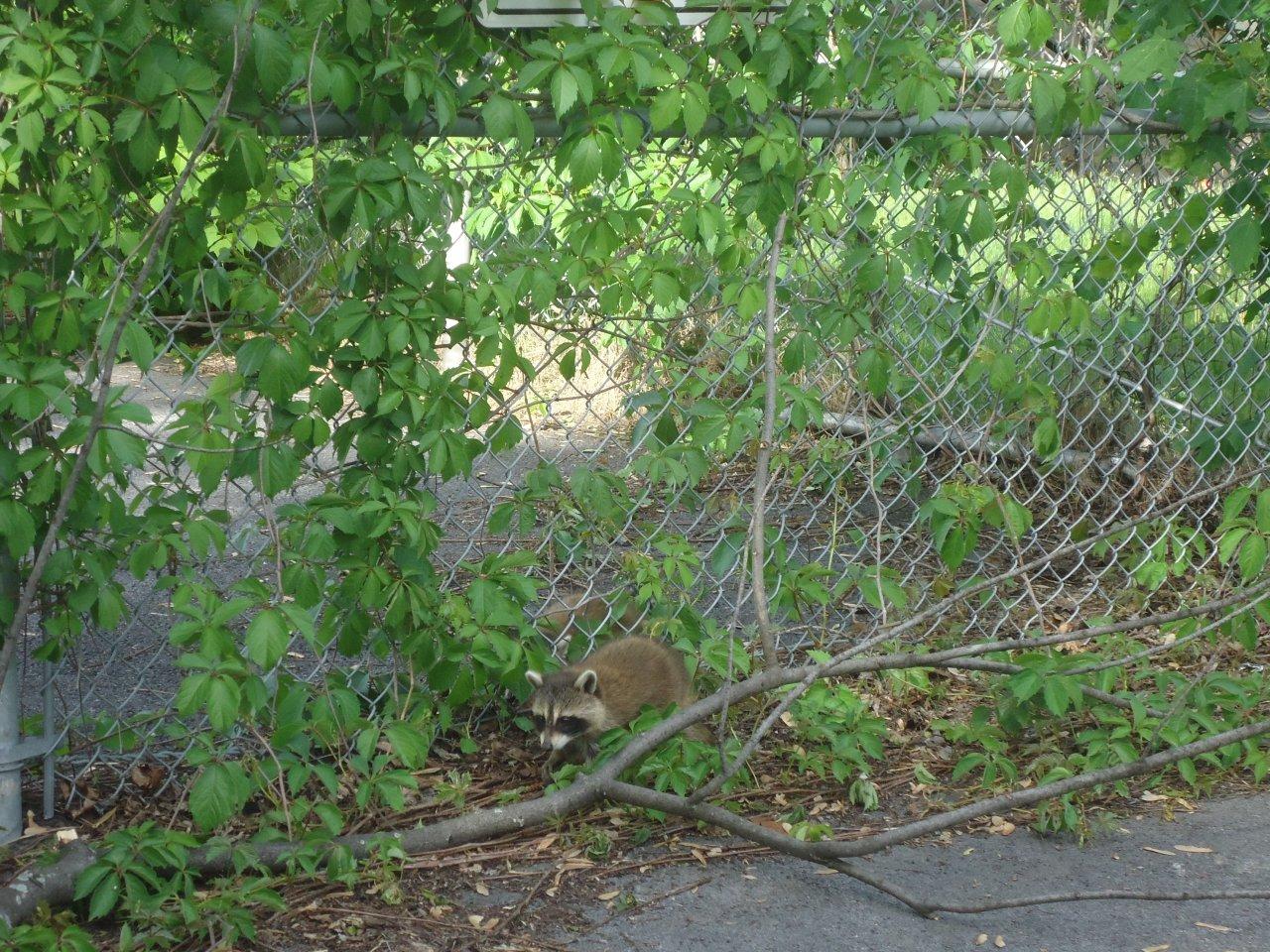 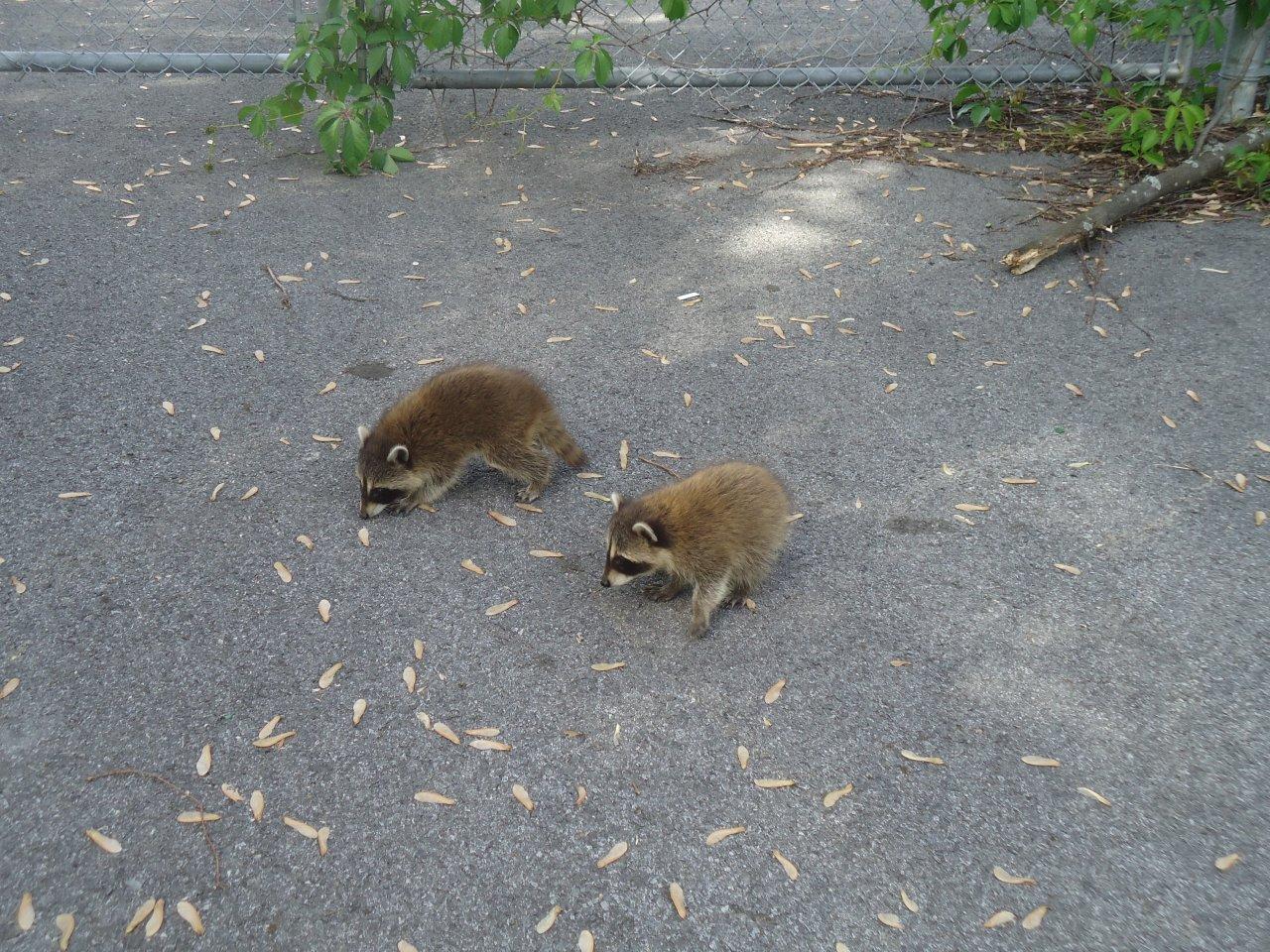 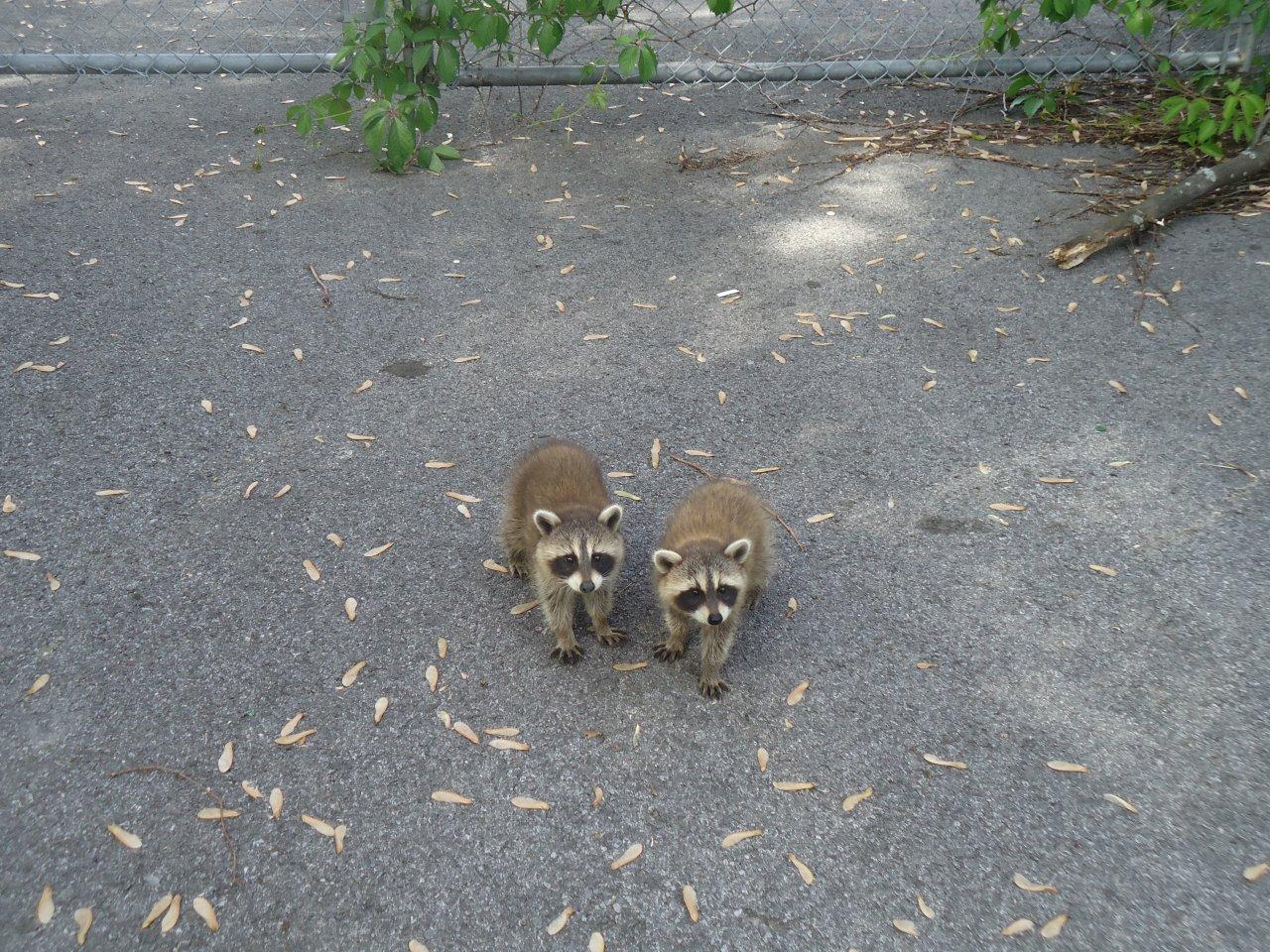 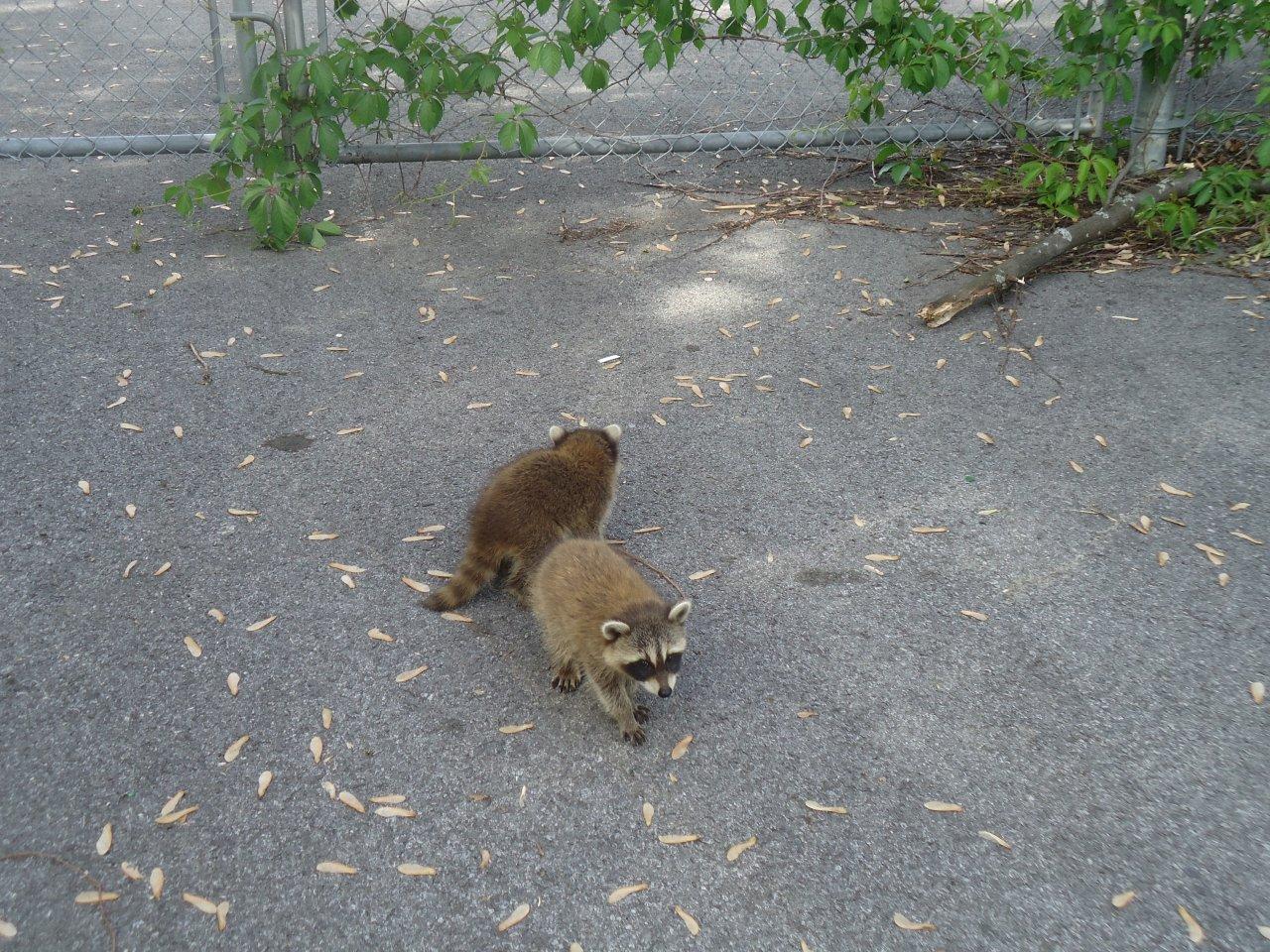 
What books are you reading this summer?
Or are you celebrating any specific authors?
Have you rescued any wild animals before?

Crystal Collier said…
My goodness, that's a few books for you, eh? I'm struggling to get through my TBR list of about 70 books right now, and those are only the fiction ones. Seriously, I wishing for the super skill of speed reading right about now. (Thinking Short Circuit style--flip through the book and have it read.)
19 June 2013 at 10:35

M Pax said…
The house party thing sounds awesomely fun. I'd like to try one in the future.

My cat is snoring behind me...

Anonymous said…
Raccoons are pretty remarkable in their ability to survive in just about any environment. You might want to be sure to put the lids on your garbage cans, though. We had a couple of feral cats that we would feed on the deck, and one night we discovered a momma raccoon and four kits eating the cat food. These two look kind of young.

Your kitty is very pretty.

Unknown said…
I'm so glad you get to see Neil! That will be amazing!

Zan Marie said…
Whoo Hooo! The House Party was awesome as usual! Though this one may take the cake for natural disasters. LOL! Argh! December doesn't seem far enough away for us to play a good party. I just thought it was... ; )
20 June 2013 at 06:34

J.L. Murphey said…
WTG on the house party. I was following in lurking not participating mode this time. Some of the things on characters was awesome!

Some of your pics did not show up, but the ones that it were great. Gotta love racoons, except for the damage they do. My mom used to call them all bandits because she couldn't pronounced raccoon.
20 June 2013 at 07:13

J.R. Pearse Nelson said…
Wow, you have a lot going on. Those raccoons are pretty cute, but I wouldn't try to make friends. Raccoons can be aggressive. They'll find food, hopefully not at your place. :)
20 June 2013 at 09:04

Meradeth Houston said…
Hope you have fun seeing Neil--I imagine it'll be awesome! The Houseparty sounds amazing, and the raccoons are adorable!
20 June 2013 at 11:11

Deniz Bevan said…
Not all Cthulhu, Alex.. We had lots of other crazy creatures running around, wreaking havoc for our characters... So much fun! You should come by next time!
20 June 2013 at 11:13

Deniz Bevan said…
Thanks, typing! I knew about Gallifrey - that's why the tattoo has me baffled! I didn't realise there was a whole language there I should learn :-)
20 June 2013 at 11:14

Jocelyn Rish said…
The raccoons are super cute. Although I have to channel my mother for a minute and say they can be dangerous little critters, so be careful.

Anonymous said…
Those raccoons look young. I'm kind of scared of the adult ones.

Deniz Bevan said…
Me neither Jocelyn - there're always more books to get!

Nadja Notariani said…
Great pics, Deniz. My son, Ezra loved the baby raccoon!
The Houseparty sounds great. One day I am going to sign up and participate - if ever I find the time. Ha! Your list of *points-of-interest* had me laughing, especially the *casualties* note.
Have a wonderful day. ~ Nadja
22 June 2013 at 07:53

Old Kitty said…
Raccoons and Kedi are SUPER ADORABLE!!! AWWWWWWWWWWWWW!!! And yay for being an official and fabulous ROW80er!!!!!!! Enjoy your house party!!

Awww I can't see the pics of Tolkein and elephants but then maybe it's cos I'm on Firefox? Anyway!!!

Anonymous said…
That poor koala! The house party sounds like it was a blast. Very cool idea -- something I might try with my creative writing class in the fall.
23 June 2013 at 17:00

Hilary Melton-Butcher said…
Hi Deniz ... love Kedi ... looks quite delightful. Energetic you walking up to get the Neil Gaiman ticket .. I'm sure it'll be highly entertaining and informative ..

nutschell said…
Kedi's is cute!! And those raccoons are too!
Nutschell
www.thewritingnut.com
25 June 2013 at 13:32