I wouldn't actually say I read it, the same way I don't really watch zombie films. But after a while, there's bound to be one or two books and movies that creep into your life. So, for instance, I've seen the classic Dawn of the Dead, as well as Shaun of the Dead ("we do the quiz!") and most recently read World War Z.

And as for reading horror... I read Stephen King. I'm sure I've read a handful of other authors, and of course I've read lots of folkloric ghost stories, but King is the one that sticks.

The hardest part about King, though, is when friends or bookstore employees (this happened again just last week) say: "I've always wanted to try Stephen King, but I don't like horror/being scared/ghosts."

I get all tongue tied and don't really know how to recommend him, beyond babbling "but it's a good scary, and usually - okay, sometimes - it turns out all right in the end! Also, try Bag of Bones or The Body."

What it comes down to is type casting, and I don't think an author who writes local New England speak as well as King does, who captures entire generations, who can create in-depth characters in barely half a page, who has such an original voice, and more, should be typecast. I mean, look at this list: Stephen King novels. That's only the full length books! There's so much to choose from in his bibliography. There's a lot more than one clown.

I lost all of last weekend to reading Under the Dome. (I won't say anything about the tv version, which I'm not sure I'll ever get around to watching; I couldn't beat Stephen King's own words on the subject anyway: King on the adaptation of Under the Dome.) Someone on the Compuserve Books and Writers Forum mentioned that the ending felt a bit rushed, but I didn't think so. It was more a case of caring so much about the characters that you really wanted to know what happened to them for the rest of their lives! And the pacing worked really well, given what the survivors (trying not to give too much away here) were attempting - a last gasp at life. 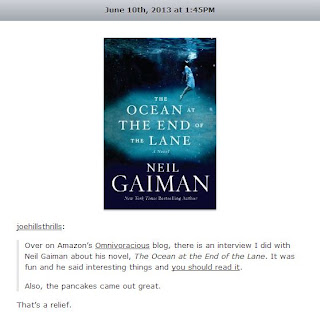 Around the same time, I got my signed copy of Neil Gaiman's The Ocean at the End of the Lane from Porter Square Books (thanks for all your help Theresa!). Perhaps I shouldn't have read it so quickly after another intense read - I'm thinking I might turn around and reread it this weekend just to savour it a little more. I learned a couple of new words, was pleasantly reminded of Madeleine l'Engle (in both the time and space aspects, and the importance of naming things), and - best and worst of all - the old UK fire, which had been lying dormant for some months, has been rekindled. Some day, some day, I will live there (or at least visit for longer than a month!).


"you know it's the ride to hell, because the red woman just got off"

Perhaps someday I'll find out what exactly that means...

Speaking of doing things for the first time off the list of 30 Things I'd Like To Do, I can cross one off!


Last weekend, I milked a cow! 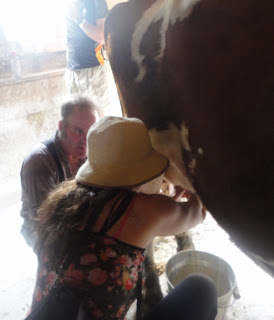 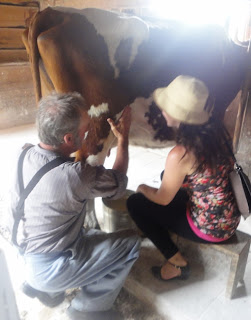 show me how, again?

It was both easy and difficult - easy because the cow was so placid and patient, and hard because I just couldn't get the rhythm. Because of that, I didn't quite get to taste it either (and wasn't supposed to try - it's against health regulations. But I'd like to try it some time. And I did get to buy cheese made at the factory on site). 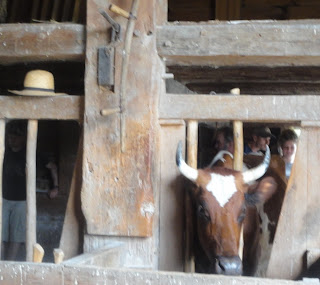 forgot to ask her name!

This all took place at Upper Canada Village, a Canadian version of the Ironbridge Gorge's Blists Hill - basically a recreation of a 19th century farming village. We visited right in the middle of re-enactments of the War of 1812, and the fields were covered in soldiers' tents... 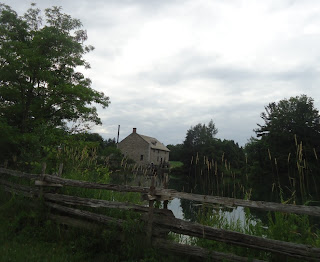 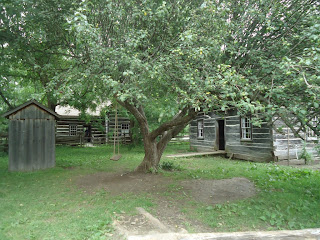 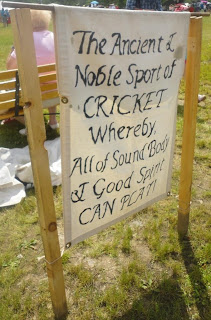 if you can learn the rules...

panorama - the United States across the river 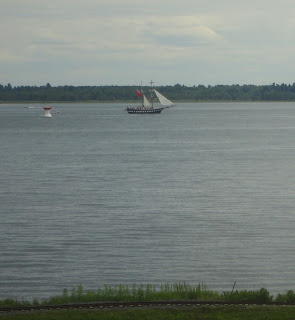 one of the ships used in the re-enactment 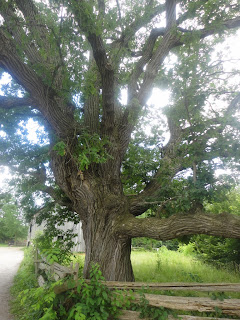 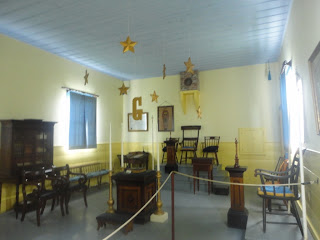 inside a masonic lodge 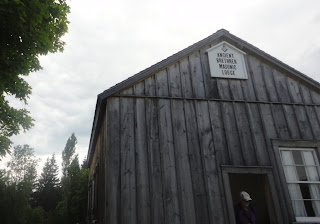 outside of the lodge
(this reminded me of the Outlander books, of course, where Jamie Fraser is made a mason while in prison) 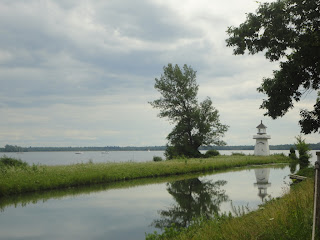 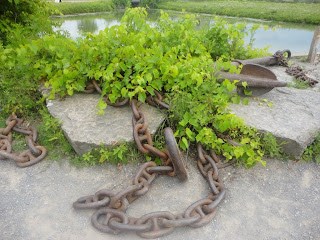 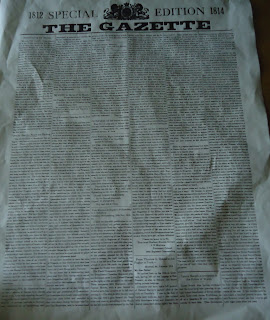 commemorative edition of the village Gazette
(I know it's hard to read - the most fascinating thing about this was learning that it took about eight hours to set one column of type - this sheet has six columns, and the Gazette cost five cents. Five cents for a week's worth of work!) 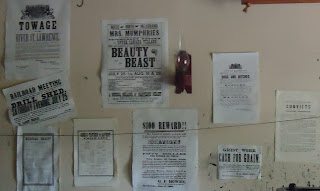 a playbill for Beauty and the Beast! Aww, perhaps it's an adaptation of my novel... 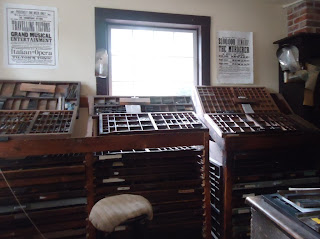 The last post on this blog was my 800th post! To celebrate, please enjoy some fun links:

Misha's hosting the Pay It Forward Awards once more!

If you're busy writing or editing (like I'm supposed to be - got through a few chapters of print-out edits last night, so I don't feel entirely worthless), then don't forget to check out the official A Round of Words in 80 Days site for pep talks from fellow authors!

And look! Mini Alex at his first gig! I'm so happy he likes his Who Scarf.

I've featured börek on the blog before, but today I've got Neil Gaiman's pancakes! From his interview with Joe Hill:


"NG: There is no make-believe in cooking. There were few things I took as much fun in cooking, when I was a boy, as pancakes. (I liked making toffee, too, because it was a little like a science experiment.)

Right. The night before you are going to make them, you mix:
1 cup of ordinary white flour
2 eggs
a pinch of salt
2 1/2 cups of milk and water (a cup and a half of milk and a cup of water mixed)
1 tablespoon of either vegetable oil or melted butter

(You'll also need some granulated sugar, and a couple of lemons to put on the pancakes, along with other things like jams and possibly even maple syrup because you're American.)

Put the flour and salt in a mixing bowl. Crack the eggs in and whisk/fork the egg into the flour. Slowly add the milk/water mixture, stirring as you go, until there are no lumps and you have a liquid the consistency of a not too thick cream.

Then put the mixture in the fridge overnight."

Read the rest - how to cook and eat 'em - and Neil's answers to questions about OceanLane on Omnivoracious. At the end, Neil adds: "This is a very peculiar interview, Joe. Let me know how the pancakes come out." See the photo above for Joe Hill's verdict - they came out great!

I might have all three, the cobbler, the brownies, and the pancakes. How can I resist?


What have you been eating lately?
Are you writing or editing, or is it too humid out?

Alex J. Cavanaugh said…
Congratulations on eight hundred posts!
Yes, Mini-Alex does like his scarf. Thanks again so much for making it.
I don't believe I've ever milked a cow. Looks like it was a fun day with the re-enactment though.
And if they don't like horror, they can always read Eyes of the Dragon.
17 July 2013 at 08:24

Mini Alex's The Who Scarf .. so I should think it'd be well admired and always worn!

Generally lots going on in your part of the world .. I've never milked a cow - one day I guess!

Neurotic Workaholic said…
Nice pictures! It looks peaceful there. And congratulations on writing so many posts! I haven't read a lot of Stephen King's writing, because he really does scare me. I watched the movie Children of the Corn, which was a mistake, because I watched it on a farm in the middle of a corn field (it seriously freaked me out to think that the "children" could be out there). But I do like his book on writing.
17 July 2013 at 11:53

nutschell said…
800 posts!! Wow congrats!! love all the pictures here. And Funny, I just watched the pilot episode for under the dome yesterday.
Nutschell
www.thewritingnut.com
17 July 2013 at 13:41

M Pax said…
Congrats on 800! Those pictures are wonderful. We used to go to a reenactment at Fort Erie when I was a kid. My brother still goes.

It's weird how authors get typecast. But then, not every writer or story is everyone's cup a tea. I don't judge. I might miss something really good.
17 July 2013 at 18:03

S.P. Bowers said…
Well, that's some more books I need to add to the pile.

I'm another one who has never read King. I know I should, but I haven't gotten around to it yet. There are just so many books out there!

J.L. Murphey said…
Sounds like a lot going on. I lost interest in the series after the second episode. Dragging and droned on and on comes to mind.

Deniz Bevan said…
Thanks, Alex! Yes, Eyes of the Dragon! Another great recommendation. Aww, I love that book. Maybe I'll reread it...

Thank you for coming by, Hilary!

What'd you think, nutschell? I'm worried about just how much they've changed from the book...

Fort Erie's across from Fort Henry, M! I was in Erie for half a day once, but didn't get to visit the Fort...

Theresa Milstein said…
You're welcome. I'm about halfway through the book. It's a quick read, so I'm trying to savor it.

Deniz Bevan said…
I'm very bad with that, Theresa - once I get suckered into a book, I kinda drop everything until it's done. I read Under the Dome in one weekend by ignoring everything else! Luckily no family or friend plans that weekend :-)
18 July 2013 at 21:44

Stina said…
I haven't read Stephen Kind since I was a teen.

My hubby makes those pancakes every Sunday, but he doesn't leave them to sit overnight.

I have only read King's On Writing, which I loved. I really need to read some of his, but I've always used the same excuse you mentioned hearing. Guess I need to push past it.

I am one of those who has never got into Stephen King, even though the few books I've read (including the Dark Tower) are aweeeeeesome. I guess I just need to get cracking!

re: what I've been eating lately, ummm, not much that's good? Yeah, I have really lost the plot with all this house moving business. I need to get back on track! I can barely make myself cook pasta in the microwave, that's how bad it's got.
21 July 2013 at 22:28

I read horror from the age of 9 to 12, and occasionally pick it up again. I'm not such a fan of Stephen King. *shrugs* Don't know why. Dean Koontz? Now there's an author who gets my blood pumping. It started for me with ghost books, and especially one I haven't been able to find about a kid who travels back in time to prevent the tragic death of his ghost friend. Ah horror... An excellent genre, best when marinaded with strong hints of adventure, romance, or fantasy.
22 July 2013 at 11:28

Anonymous said…
Congrats on the 800 posts. I love coming here to see what you've been up to.

I've never tried to let pancake mix sit overnight either, Stina - I wonder how it changes the flavour?

Thank you Tia and Milo and Nas!

I'd send you goodies if I could, Trisha! I feel badly, someone gave me rhubarb from their backyard and I meant to make muffins but still haven't gotten around to it...

Ooh, I haven't read Koontz in ages Crystal! Maybe I should get on a horror bandwagon...