Margo (who was featured on Nutschell's Writing Space the other day!) had a list of Top Ten Most Intimidating Books.

Of the ones she listed, The Grapes of Wrath is actually at the top of my TBR pile at the moment. And I have read Ulysses! It took me a year - I read a chapter each Sunday (or so). After each chapter, I read the corresponding chapter in Stuart Gilbert's James Joyce's Ulysses: A Study. Is it really possible to read Ulysses without any help at all? I haven't tried Finnegan's Wake yet...

Here are my Top Ten Most Intimidating Books:

War and Peace - I don't like admitting it, but I still haven't gotten around to reading this. I haven't read Crime and Punishment yet either, but I've read other books by Dostoyevsky, so I don't feel as badly. I'd also like to read Anna Karenina...

Numbers 4, 5, 6, and 7 belong to books in other languages - I haven't gotten past the first chapter of Orhan Pamuk's Istanbul in Turkish, or the third chapter of the Turkish translation of Diana Gabaldon's Outlander, or the fifth chapter of the German translation of Gabaldon's Drums of Autumn... and I need to find another French book to read now that I've finished The Count of Monte Cristo. Any suggestions?

Number 7 is for the Morte d'Arthur. I've read bits and pieces, and all sorts of other versions of the Arthurian tales, but haven't read all of Malory's version yet. For someone used to Tolkien, the Morte d'Arthur just seems so haphazard, to say the least. And I feel badly for even criticising it...

Finally, numbers 8, 9, 10 and higher up belong to... anything on an ereader! So far I've only read one ebook in its entirety, Heart-Shaped Box by Joe Hill. I read it on my phone, and while the experience wasn't a bad one, I just can't seem to settle down to regular e-reading. Meanwhile, the books are piling up - 50 of them last time I checked my Kindle for iPad!


Which books are you intimidated by?

ROW80! I've been doing better on the editing front lately. The goal is to finish the final read-through on paper, write one more spell and one more curse, then enter those final changes and send Druid's Moon off to betas next week!

I've also started editing the latest short story, and am hoping to take part in this month's exercise on the writers' forum - drafting for that tomorrow!


"The idea is simple. You think of a character - even a limited number of traits is OK to start with; you need very little to begin the process.

Next, for each letter of the alphabet (or a subset; even 5 letters is going to work quite well), you let the character pick a single word that starts with that letter, then write a short (single paragraph) scene or thought or idea or comment from the character's POV. I'm a workaholic, and I started at A and went to Z, but you can pick any letter in any order because the idea is to be spontaneous, like free writing or free association."

Here's another challenge I'd like to try, even though the deadline has passed: Writing a story based on a Neil Gaiman prompt! I found out about it on Twitter, and then on Madeleine's blog.

Neil gave us this line: "It wasn't just the murder, he decided. Everything else seemed to have conspired to ruin his day as well. Even the cat."

And now to write the rest...


More photos from the weekend before!
After Upper Canada Village, we went to Canada's capital Ottawa for a day:

Yes, apparently they baked a special maple leaf cookie for the President, and he loved it! 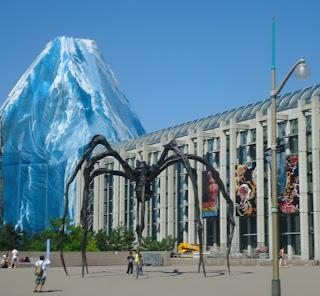 I think the iceberg is just a fancy way of covering up renovations.
But that spider is all too real; it's called Maman.
The National Gallery bought it in 2005 for over three million dollars! 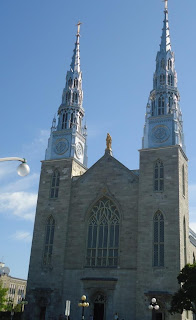 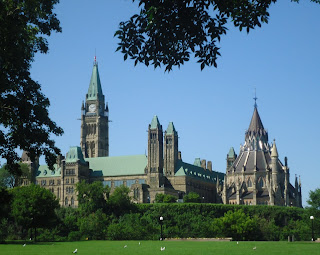 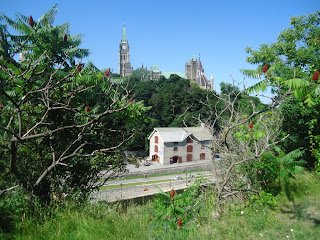 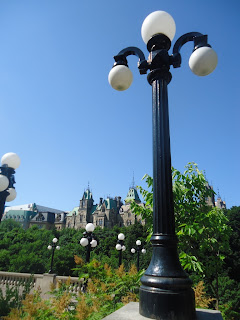 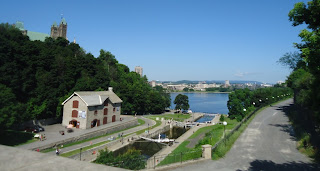 Another shot of Bytown, showing more of the locks on the Rideau Canal 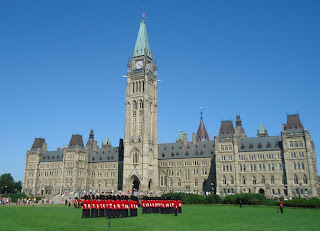 Changing of the guard at Parliament - we have it too! Even if it's not before a palace 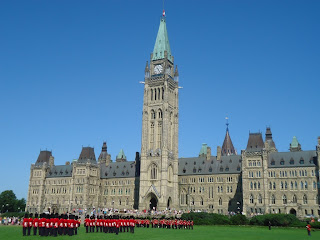 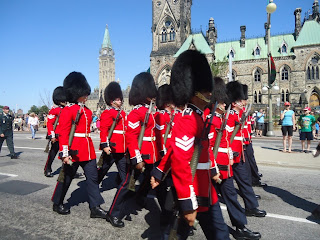 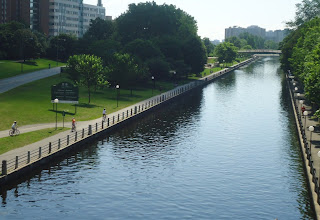 Rideau Canal - it's disorienting to see it in summer when I remember skating on its frozen surface in winter!

What are you working on? Any other interesting writing challenges out there?

Alex J. Cavanaugh said…
The photos are awesome! Even if it's covering up construction, the iceberg looks cool. And I think War and Peace intimidates everyone.
24 July 2013 at 07:53

I love the Neil Gaiman prompt. I didn't know about that, but now I have to try it. I just started doing my own "Neil Gaiman writing prompts." I pulled random and interesting sentences from Fragile Things to use as prompts because I'd like to write more short stories. I'll probably blog about this process and the sentences I'm using.

M Pax said…
I read War and Peace and Anna Karenina. I named one of my cats Karenina. :) Get a W&P with a character list of who is who in it. It's the only way to keep all the Pietr's straight. But I really liked that book.

I should read Ulysses at some point, and Don Quiote. Haven't read that either.

Have your read Les Miserables? Victor Hugo wrote a decent book. Dumas is very entertaining, too.
24 July 2013 at 14:25

J.L. Murphey said…
Actually, I've read most of what you are procrastinating about. But lugging them around in book form is a hernia. A couple of months ago, I blogged about my Kindle reading list and while I have read quite a few of the books in there...I've downloaded another thirty stories. I've never had such a long to be read pile. Before my Kindle it was twenty books tops.It's just to easy to download to.
24 July 2013 at 14:57

S.P. Bowers said…
I've read Ulysses. That's all I can say about it. I loved War and Peace and Anna Karenina. I enjoyed Crime and Punishment. I enjoyed Grapes of Wrath too.

Beth Camp said…
Fascinating post! I remember fondly reading War & Peace aloud for several months when our daughter was a teenager. Re books in French, how about Camus' The Stranger?

Otherwise, the pictures of Ottawa are beautiful, reminding me of time spent there. And now I have to look up Neil Gaiman. I know nothing of his challenge other than what you've written here. But this looks like an interesting way to begin a character study . . .
24 July 2013 at 23:26

Never read War and Peace. I made it about 3/4's through Anna Karenina, but haven't gone back to finish it yet. I probably should at some point...

Neurotic Workaholic said…
That spider would freak me out; I'm terrified of spiders! I did read Anna Karenina, and it was intimidating, at first, though I liked the way Tolstoy portrayed the romantic relationships; I thought it was pretty realistic. The book is so long, though. I got through two-thirds of it before someone told me the ending, and I was so mad! I finished reading it anyway, though.
25 July 2013 at 22:56

S.H. Aeschliman said…
Congrats on being *this close* to a finished draft of Druid's Moon, Denise! Definitely cause for celebration. And I loved the synopsis. =*)
28 July 2013 at 01:55

Hilary Melton-Butcher said…
Hi Deniz .. reading in another language scares the pants off me - and the thought is useless .. a failure in that department.

I am amazed at your reading abilities and knowledge ... I really don't need to look for books I should come here!

The photos are glorious - the iceberg is interesting .. and I could imagine a glacier stretching away from that edge ... the Ice Age is back ...

Oh and the Busby hats on the Guardsmen .. I knew Canada is also very English .. but hadn't realised you still have Changing of the Guard ...

What a fun way of spending a winter afternoon skating on the frozen canal ..

I've spent most of my summer helping my daughter decide on colleges to visit. She's starting her senior year in a couple weeks. I have written a fable for an anthology and critiqued loads of manuscripts and queries for friends this summer. I'm ready to settle down and start writing a new novel.
28 July 2013 at 14:15

Nas said…
Wow! Love the photos. The iceberg one is so awe-inspiring.

Deniz Bevan said…
Thank you for your lovely comments everyone!

Sara W, that's an awesome idea! I did write a short story based on a throw away line from a Sandman story...

I read Dumas (The Count of Monte Cristo) for the first time this spring, Mary - in French! Now I can't wait to read more :-)
I know what you mean Neurotic - because it was in French, I was reading very slowly, and I actually ran away from a couple of people who had seen the movie (!) and were about to blurt out the ending to me!

Anonymous said…
I love the pictures. That iceberg is amazing.