O is for... Outlander

Okay, this doesn't have much to do with Geneva - except for the question of how on earth I'm going to watch the Outlander series when it starts in June.

How to summarise this for those of you who haven't read the books? Let's see... Once upon a time a friend leant me a copy of a book called Outlander, by Diana Gabaldon. I was wary about reading it, since I don't usually enjoy books recommended by others, but it was a historical, set in Scotland, so already I was positively biased.

Once I did start, I couldn't put it down. Lucky for me, not only was it a Big Book, but it was part of a Big Series, and I was coming in right at the time that the latest book, A Breath of Snow and Ashes, was released in paperback. I got to read all the books at once, and then join in the loooong wait for the next one, An Echo in the Bone (but how much more other fans must have suffered in the wait between the second and third books, when the protagonists were separated by both space and time and there was no knowing if they'd ever come together again!).

Diana describes the extent of the series better than I can: 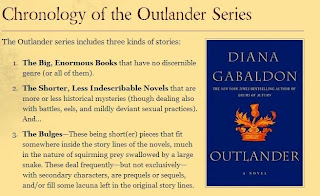 Also, her challenge with regard to the first book still holds:

As for how to describe it...as Diana says: "Frankly, I've never been able to describe this book in twenty-five words or less, and neither has anyone else in the twenty years since it was first published."

But here's her description anyway: And here're all the books: 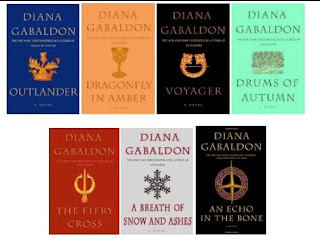 She's in the Final Frenzy of writing the next one, and it should be out in a few months!

If you're wondering why I keep referring to her as Diana instead of by a more formal form of address, it's because I feel like I know her, mainly because the best side effect of reading this series was joining the Compuserve Books and Writers Community, which Diana has called the greatest "electronic literary cocktail party" out there. You should have heard my squee the first time I addressed a message to her and got a reply!

Actually, I just did a quick search, and I think this might have been it: a thread about Susan Cooper. Here's another thread from a little later, discussing cover blurbs. And here's us talking about me writing a review about one of the Lord John books. And here's the review itself, of Lord John and the Brotherhood of the Blade.

There are lots of Outlander themed blogs out there. A yummy one is Outlander Kitchen, featuring recipes inspired by the books.

And yes! They're making a tv series of the first book. Everything you ever wanted to know about it is here on the Outlander Starz page. Can't wait!


Which series would you recommend?

Anonymous said…
I've heard of these books and have a vague idea of what they're all about (mainly thanks to Donald Maass), and once an agent compared one of my manuscripts to Outlander. The coming of the TV series must be so exciting for Outlander fans. Hope they do right by the books!

I read them while travelling in 2004 - though I admit I haven't managed to finish book 5 yet. I really need to do a re-read.

Zan Marie said…
*Everyone* should read OUTLANDER! Besides the STARZ series will open a lot of eyes to the spell-binding, wonderful, fascinating, glorious world of Gabaldonia. ;-)

Didn't they make a series about ten or more years ago based on The Otlander books?

I remember some good-looking guy sporting a pony tale and he would be transported between present time and Ancient Scotland... Very cool show.
17 April 2014 at 11:38

Anonymous said…
I think it's going to turn out great. The writers are using the novel as their "Bible" and Ron Moore the producer has consulted Diana on quite a few things. It's been fascinating to watch the transformation of the actors, especially Sam Heughan who plays Jamie.

Book 8, Written in My Own Heart's Blood (otherwise known as MOBY) will be out June 10th and the series will start Summer 2014. Speculation is early August, but Starz hasn't released an official date.

For those who want to get in on the fun can join Heughan's Heughligans, Caitriona's Catriots, the Ladies of Lallybroch, Outlander Series, Outlander Kitchen as Deniz mentioned and there are groups popping up in the different countries and states. I'm a member of the Outlandish Texans. :)

I started reading Outlander in 2004 and have been hooked ever since. I'm doing a reread of the series right now with the help of Audible. I'm on the 5th book right now.

Love of Gabaldon was one of the things that drew me to Deniz's blog!! Hope you're enjoying your new adventures! :)

Carrie-Anne said…
I'd love to read the books, since I adore doorstoppers, but I'm always wary of any book surrounded by so much hype. Almost always, I end up not going along with the crowd and either not getting or seriously disliking the book.
17 April 2014 at 15:33

Michael, I think that's something completely different. This is happening for the first time, though the books have been around for 25 years.

Carrie-Anne, I know what you mean about hype, but this is like Zan Marie said - something different entirely. The hype is only there because so many of us have been fans of the books for so long that we can't wait to see them brought to life in a different way. I'm even more excited by the fact that the latest book comes out next week!
1 June 2014 at 06:06