Revisiting the AtoZ with Photos and Trivia on Switzerland, Zombie Attack!, and ROW80

The something old is a fact that I'd forgotten: Freddie Mercury lived in Montreux, Switzerland in the last years of his life and even owned a recording studio there. Apparently he used to say "If you want peace of mind, come to Montreux." There's been a statue of him by the lakefront since 1996 and there's a Freddie Mercury Memorial Day held there every September. We'll have to visit!

The new-to-me fact is that the Deep Purple classic Smoke on the Water is all about Lake Geneva!

Usually I'm really good with hearing and memorising lyrics, but you know how sometimes you think you know a song so well that you actually don't pay much attention to it? Yea, that. I mean, the opening lines to the song are "We all came out to Montreux, on the Lake Geneva shoreline, to make records with a mobile, we didn't have much time."

I'd never paid attention before! Here's the Wikipedia story:

"...on 4 December 1971 Deep Purple had set up camp in Montreux, Switzerland, to record an album using a mobile recording studio (rented from the Rolling Stones and known as the Rolling Stones Mobile Studio -- referred to as the 'Rolling truck Stones thing' and 'a mobile' in the song lyrics) at the entertainment complex that was part of the Montreux Casino (referred to as 'the gambling house' in the song lyric).

On the eve of the recording session a Frank Zappa and The Mothers of Invention concert was held in the casino's theatre. In the middle of Don Preston's synthesizer solo on 'King Kong', the place suddenly caught fire when somebody in the audience fired a flare gun into the rattan covered ceiling, as mentioned in the 'some stupid with a flare gun' line. ...

The 'smoke on the water' that became the title of the song ... referred to the smoke from the fire spreading over Lake Geneva from the burning casino as the members of Deep Purple watched the fire from their hotel. The 'Funky Claude' running in and out is referring to Claude Nobs, the director of the Montreux Jazz Festival who helped some of the audience escape the fire."

All this Geneva talk reminds me of the A to Z Challenge, so I thought I'd share a few more photos with you all. 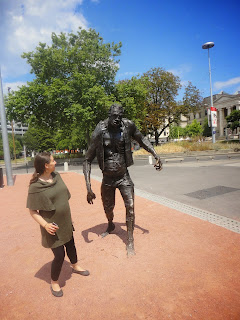 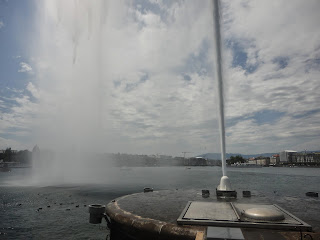 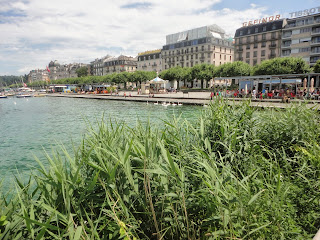 View of the other side of the lake 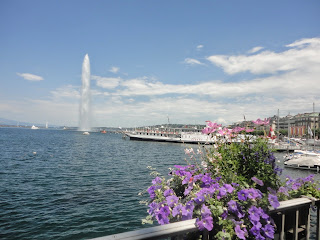 The Jet d'Eau looks a lot smaller from a distance 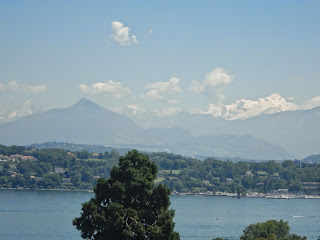 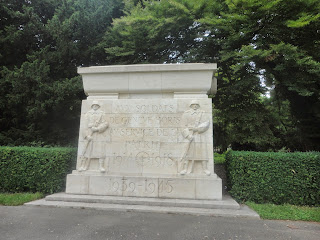 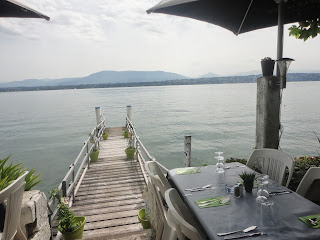 Lovely lakefront restaurant in Bellevue, about twenty minutes up the shore from Geneva 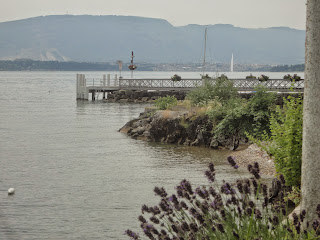 You can still see the Jet d'Eau from here! 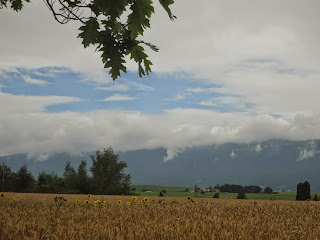 Sunflowers in Meyrin, close to the border with France

As for ROW80, I'm halfway through one of my goals - typing up the latest batch of Alfred Russel Wallace letters.

This set includes letters from his son, who left England to work in the United States in 1897. It's fascinating reading about his day-to-day jobs as a telegraph line and pole repairman out along the Colorado railway tracks. I had no idea that British people at the tail end of the Victorian era called their parents Pa and Ma, and referred to adults as grown-ups -- but apparently the latter comes from Austen and Dickens!

What fun facts have you learned this week?

Alex J. Cavanaugh said…
That's a fascinating story about Lake Geneva and the fire. Learn something new every day!
23 July 2014 at 18:20

Anonymous said…
I had no idea of either of these facts! (though to be honest, I don't think I've ever actually listed to the lyrics of Smoke on the Water - all I know is the guitar riff!)

Great photos! I really want to see more of Switzerland. The bus tour I went on last year visited Lauterbrunnen for one day, but then we went straight on to Venice.
23 July 2014 at 21:59

Denise Covey said…
Hi Deniz. These are some of my favourite parts of the world, so thanks for sharing photos of the gorgeousness. Very interesting about Deep Purple's inspiration. I listen to songs and get caught up with the beat, and many lyrics are too hard to decipher these days.

Optimistic Existentialist said…
Love that story about the song's inspiration and I LOVE that zombie photo :)
24 July 2014 at 07:30

The Armchair Squid said…
There was a Classic Albums episode about Deep Purple's Machine Head which, of course, includes the story of "Smoke on the Water." I think you'd enjoy it.
24 July 2014 at 12:26

John Holton said…
I remember reading the story about "Smoke on the Water" when the album came out. I'm dating myself, I know... "Machine Head" was a great album; "Smoke" might have been the weakest song, and it was fantastic.
24 July 2014 at 14:57

One moment, please........Arggghhhh!!! My worst nightmare, mention of the alphabet challenge that never ends. HELP! :)

I had no idea about the origins of Smoke on the Water was in reference to Lake Geneva. Cool stuff and thanks for all the musical stuff. Frank Zappa was rather fond of yellow snow, evidently :)

Lovely... Thanks for sharing your beautiful pics with us.

I haven't been to Europe since the early 90's and it miss it. Throughout the 80's, I practically lived there. Sadly times have changed. I hope to visit one day soon....

How are you settling into your new place and area?

Hilary Melton-Butcher said…
Hi Deniz - the Wallace project must be so interesting - lucky you.

Freddie Mercury was an amazing character wasn't he .. I'd no idea about these connections either .. all of them .. the lyrics, the reason etc .. fascinating to read about.

Lovely area you're living in .. and so good to see more photos. I learnt about the Reformation Wall in Geneva acknowledging Luther, Calvin, Knox et al ...

Fascinating what we learn .. I still use grown-ups ... and each family would adapt their familial callings ... I wonder when Mummy and Daddy came in ..

Deniz Bevan said…
Thanks everyone!
Nice to meet you too, Kristen!
Aww, sorry, Gary! But I had so much fun posting photos each day :-)
Miss you, Michael!

And yes, I miss writing, too, Theresa. I've got so much editing to do! Need to get back on a regular schedule or in a regular groove soon.