I'd forgotten I'd appeared in Real Simple magazine!

For the 2012 A to Z Challenge, I listed my favourite books.

For the 2013 A to Z Challenge, I had no theme! I started with A is for Astronaut.

The 2014 A to Z Challenge was based on our move to Geneva, Switzerland. There were lots of photos!

I hosted a virtual writers' conference, for everyone missing out on the Surrey Conference that year.

If I was doing a proper summary of all the posts, I would have an entire group called ...And Then There Was Neil. It all started with An Unexpected Post About Neil Gaiman. Things have been very exciting since then!


I missed the Insecure Writer's Support Group day last week and didn't have a chance to introduce myself. For the benefit of an ROW80 update then, here's what I'm working on:

Larksong, a romance set in the summer of 1914 in Canada. First draft being typed up into second draft.

Three historical romances with interconnected characters, set in 1470-1493 London and Barcelona and Constantinople: Captive of the Sea, Out of the Water, and Rome, Rhymes, and Risk. The second novel was written first and is out on queries. The other two are in various stages of editing.

There are others, including my recent NaNo draft and short stories, but those are the main projects. Currently I'm focusing on completing the typed draft of Larksong -- and getting back into the Alfred Russel Wallace transcriptions. The goal for this week is to print the latest batch and start typing them.

And now, let's break up all that text with some fireworks! 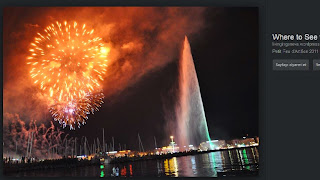 (from the Living in Geneva blog)


Very simple really --
anyone commenting on this post over the next week is eligible to win a 20$ gift card for books.
Your choice!
Amazon, Indigo, BookDepository, AbeBooks, whoever does online gift cards.


Thank you all for reading and for being such a great blogging community.
Here's to another seven years and 900 posts!

Malcolm R. Campbell said…
Congrats on so many posts and for finding so many cool things to write about.
14 January 2015 at 09:25

I love how diverse your topics are, too.

dolorah said…
Thats a lot of posts! Congrats. I remember some of those posts, all were intriguing.

Anonymous said…
That's so awesome! I'm also in the hundreds, but have to check my number. I love seeing dedicated blogging.
16 January 2015 at 02:10

Hilary Melton-Butcher said…
HI Deniz - you have achieved much ... and no mention of that little soul who made her way into the world last year ... Congratulations and good luck with the contest ... 900 - and I love the way you've correlated how it's all happened .. cheers Hilary
16 January 2015 at 03:50

Current said…
900 is a wonderful achievement! Congratulations, and good luck with all the future posts.
16 January 2015 at 14:14