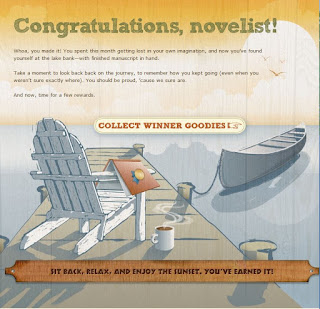 I was about to add "relatively speaking" but I just realised that today is Insecure Writer's Support Group Day! In honour of the occasion, I refuse to feel guilty over all the editing I am not doing, and instead focus on all the ROW80 goals I've accomplished this summer, some set in advance and some unexpected but exciting. Since June, with regard to writing and transcription goals, I have:

Beta read two novels (not counting additional synopsis or query letter or scene-related assistance)
Written a short story (One to Another)
Provided my contributions to a joint novel I'm writing (s l o w l y) with family members (The Horror of Horhor)
Typed up over 10,000 words on Larksong (my 2014 NaNo novel), with only 10,000 left to go
Provided brief copy edits on a self-published novel
Submitted two requested reviews and reviewed a handful of other books read
Finished typing up another batch of Wallace correspondence transcripts (with only the formatting left to do)
Jotted brief notes for a brand new novel inspired by the life of Henry Blythe King Allpass
Written the first third of an entirely new novel for CampNaNoWriMo! (The Heathen in the Hold)


I hadn't realised that the goals for CampNaNo weren't flexible, in the way our ROW80 goals are. I had originally intended to write 20,000 words on a new story, but only managed 15,000. I declared myself a winner, though, since I made up the other 5,000 with the short story and the contributions to the family novel. I wouldn't have been so lax with myself if there wasn't a baby in the house, of course!

I also wrote one other piece, which was a reworking of a vignette I wrote more than a year ago. There's an image by Dave McKean at the end of one of the collected Sandman (Neil Gaiman) editions, of a dark New York City-type building. As soon as I saw it, I was inspired. I'd originally intended the vignette for Vine Leaves, but wasn't accepted.

Then, a couple of weeks ago I caught a Janet Reid flash fiction contest marking the publication of Go Set A Watchman (which I haven't read yet. I'm just saddened by all the "regular" readers (i.e. those not involved in the publishing industry in any way or frequenting writing-related blogs or what have you) who are buying it because they think it's a sequel. Saddest instance was a colleague who told me he was interested in this new release, but admitted he hadn't read To Kill A Mockingbird).

The main rules were 1. Write a story using 100 words or fewer and 2. Use these words in the story: watch, man, total, flim, flam

I took my vignette, had fun tightening and reshaping it, and then realised that at the moment when I saw her tweet about the contest, the deadline had already come and gone! Instead, I'll share it here:

Riding home, slumped against the cab window -- had two girly drinks (flimsy flamingo straws included) and am playing at melancholy without being totally drunk -- I notice a pine strung with Christmas lights.

Tonight he said he's moving, "but we'll keep in touch."

I say no, and he slams the brakes.

Christmas lights and fluorescent glare shine off snow where I stumble out, but even if I'm drunker than I thought, they can't blind me from the truth:


The original (with a more hopeful ending), is under my Shared Writing Snips tab, if you'd like to compare.

Next task is to finish editing One to Another for submission to the Surrey International Writers' Conference contest. I've gotten some great feedback from betas, but am up against my bugbear: needs more conflict. I always struggle with raising the stakes. Oh wait, it's Insecure Writer's Support Group Day...


What are you congratulating yourself for today?

Have you entered any of Janet Reid's flash fiction contests?

Theresa Milstein said…
I am so saddened about Go Set a Watchman. I don't know if you've noticed, but I plastered my complaints all over Facebook.

Since Janet Reid only reps adult, I'm sure my stuff isn't for her. Wish you'd gotten to do it though! Maybe next time.

I'm really impressed with how much you're accomplishing with a little one in the house. I didn't start writing until my youngest was 4.
5 August 2015 at 10:29

Elise said…
I'm bothered by the whole Go Set a Watchman thing. It feels like she didn't have much say if the book was pubbed or not.

USNessie said…
100 words is soooo tight! But it is such a FANTASTIC writing exercise.

Alex J. Cavanaugh said…
I think what you've accomplished so far this summer is beyond impressive! I feel like such a slacker.
5 August 2015 at 12:41

Hilary Melton-Butcher said…
Hi Deniz - I'm always shattered at how much you get done - puts me to shame and you sit amongst my thoughts sometimes .. as for goodness sake Hilary get on .. do what Deniz does ... even with a new baby in the house!

Take care enjoy the summer and many congratulations on your achievements. I think Go Set a Watchman hasn't had a chance - many don't seem to realise it wasn't ready for publication ... and are they thinking it's a today's novel, or one written in the 1950s, set in the 30s ... when it's a first draft.

People are so opinionated without working things out .. or thinking about the other side of the coin ... cheers Hilary
6 August 2015 at 03:51

KristenAnn said…
Amazing goal progress, and I'd call that a CampNaNo win, too. Easy for me to say, since I've never participated. Also, great little piece of flash fiction!
6 August 2015 at 11:53

S.P. Bowers said…
How do you always come up with titles so early? Or at all? I never can get a title right.

Deniz Bevan said…
Thanks so much, everyone!
I think it helps that I can draft longhand - scribbling on paper is easy, even with a baby around...

Not sure, Sara. I sort of feel I need a title, to hang the novel's theme or central images on. If I'm stuck, others help - the second book set in the Mediterranean, after Rosa's story, was titled by ZanMarie! :-)
7 August 2015 at 09:56

Anonymous said…
You did an amazing amount of writing and writing-related tasks this summer. I would consider that a win. I've seen other people posting that they met their goal by working on more than one writing piece.
8 August 2015 at 07:01

Here, There be a Writer said…
I loved to Kill a Mockingbird when I read it in high school and it is current in the to re (or re-read) pile. Still is one of my top 10 books I have ever read. I've read a little about Go Set a Watchmen, and still not sure what I feel. I am curious though. Maybe I will re-read To Kill a Mockingbird and then Watchman. I don't know. I do have a lengthy read list (who doesn't?). Currently reading 3 separate books, and yes I am able to keep them straight. :-) Just no fast reading...


Rewarding myself with a week of birthday goodness and jumping hard back into the think of it this coming week.

Nick Wilford said…
Incredible how much you've done during a summer month! If I had won Camp NaNo, I wouldn't have got anything else done, let alone the additional edits and notes you mention. Way to go!
10 August 2015 at 00:17

Denise Covey said…
Deniz, you're amazing with what you've accomplished while having a little one around the house! Good for you.

Have fun editing when you get to it.