is for Hugo Dyson, Lecturer, Fellow, and veteran of World War I.

Humphrey Carpenter records that he "published virtually nothing, and what there is of his in print...captures almost nothing of his volatile personality. ... In tutorials he would begin by dispensing beer -- 'Bring out the buckets, men' -- yet he rarely drank it himself, wishing merely to raise his pupils to his own normal level of eloquence. ... Some were maddened by him. Others [left] the tutorial hour 'joyful under the impetus of irresistible gusto'."


"[C. S.] Lewis's walking tours with his brother and with [Owen] Barfield came to an end with the outbreak of war. Warnie Lewis had acquired a small two-berth cabin cruiser [which] he called Bosphorus. In August 1939 he arranged to take Jack [C. S. Lewis] and Hugo Dyson on a short holiday up the river. [When Warnie was called up] Jack and Dyson had no wish to cancel their trip, but neither of them felt able to manage the practical side of a motor boat; so they enlisted the Lewis family doctor, R. E. Havard. ... They set off up the Thames from Oxford, following the river through low meadows and past riverside pubs ('Few of these', remarked Havard, 'escaped a visit from us'). On the first evening, after an hour or two spent at the Trout Inn at Godstow, Dyson and Lewis began a vigorous argument about the Renaissance ...
"[They went on in this way, with no news from the outside world for a few days. Havard reports:] '...we heard at midday on the Friday that Hitler had invaded Poland. We knew then that war was immininent. The news broke on us, I think, at Godstow, and the return to Oxford was in an unnatural silence. We left Bosphorus at [the boatyard], and agreed to meet for dinner at the Clarendon in Cornmarket. At dinner Lewis tried to lighten the gloom by saying, "Well, at any rate we now have less chance of dying of cancer."'"

One day, when Warnie and Dyson were at Blackwell's Bookshop: "'Walking up to the counter he said: "I want a second hand so-and-so's Shakespeare; have you got one?" The assistant: "Not a second hand one, sir, I'm afraid." Dyson (impatiently): "Well, take a copy and rub it on the floor, and sell it to me as shop soiled."'"

Another time, as they left a pub, a boy came into the yard and fell on the cobbles. Dyson entreated him "'Don't do that my boy: it hurts you and distresses us.'"


These stories make me wish I could go back in time and hang about Oxford for a few days!

I'd definitely be able to progress on my writing and editing then. ROW80 goal of reading is still going strong. Among others, I've read a bittersweet-with-a-happy-ending book by Rose Tremain (The Road Home), and a new cosy southern romance by Kait Nolan (Just For This Moment).

I haven't got a Dyson-related photo, but since spring has arrived in our corner of Switzerland, I took a screenshot of some of my previous springtime photos: 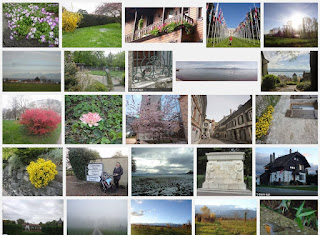 Do you know anyone you'd describe as "a real character"?
Were any of your teachers fun and eccentric?

sage said…
Thankfully, I've had plenty of characters in my life (and hopefully I have been a character for some of my friends).

Mithrennaith said…
Instead of a Dyson-related photo, take this bit from the movie ‘Darling’ from 1965, in which Dyson played a small part, showing his picture: https://www.youtube.com/embed/o5N6zLpdf4k?feature=player_detailpage#t=144
7 April 2016 at 22:19

Hilary Melton-Butcher said…
Hi Deniz ... yes living in Oxford for a few days before the War ... interesting times. I was there at school for 9 years - but we were on the Hill .. still going back takes me back in time ... and the more I learn.

I'm certain many of my mother and father's friends and my uncles and aunts would be great companions ... and certainly I have some happy memories. They were both nearly 20 when the War broke out ... so led to difficult events and a different time ... then we came along. A friend of my father's from Oxford and the War ... would mention the Inklings .. but I never found out more.

Deniz Bevan said…
Oh, sage, I almost picked it up to read the other day, then chose an Agatha Christie instead...I'm between books at the moment, so will start it tomorrow, maybe!