I'm trying to think of how best to describe him to those who might not know him at all. Fellow, Tutor, and Professor, at Oxford and Cambridge; veteran of World War I; Christian apologist and author; author of The Chronicles of Narnia; author of a space travel trilogy; nucleus of the Inklings.

I think the best thing is to be brief. For my part, I love the atmosphere of talk and friendship and books revealed in this episode, related in Humphrey Carpenter's biography:

[On a time], "Tolkien and [Lewis] decided to spend an evening reading aloud the libretto of Wagner's Die Walkure [in German]. They began after tea, broke off for supper at the Eastgate -- 'where we had fried fish and a savoury omelette, with beer' -- and then returned to [Lewis's] rooms in Magdalen 'and finished our play (and incidentally the best part of a decanter of very inferior whiskey),' recorded Warnie [Jack's brother, in his diary]. 'Arising from the perplexities of Wotan we had a long and interesting discussion on religion which lasted until about half past eleven.'" 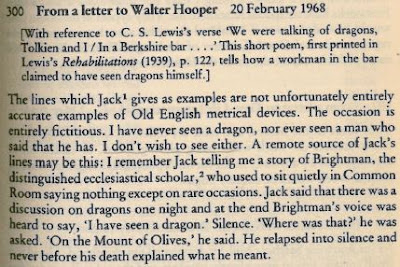 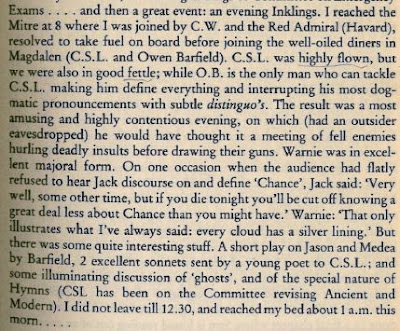 
What were you talking of the last time you stayed up late with a group of friends?

Alex J. Cavanaugh said…
They did have some interesting conversations.
I don't think the last gathering of friends of mine led to anything but goofiness.
12 April 2016 at 07:39

Hilary Melton-Butcher said…
Hi Deniz - certainly my depth of discussion would only ripple the surface - though some conversations start and I wish we could carry on and I could listen - probably more as a fly on the wall - though I do question a lot - so I suspect the fly might have to join in occasionally.

It's great there's the letters and Warnie's reminiscences of his brother's discussion subjects - they were so well read then ... fascinating post - thanks ..cheers Hilary
14 April 2016 at 02:42