is for...not much to do with K. It's another one of my sneak-in-a-post days. Three of my A to Z posts will feature items from The Tolkien Photo Challenge, and this is part one!


The original Tolkien collection photo challenge was organized on the Middle-earth News blog by Britta Siemen and Myla Malinalda:

"If you have a blog or any kind of social media account, feel free to participate! (If not, you can always leave a comment on any of my posts showing off your item for that entry.) One of my favourite things about being a collector is seeing what other people like to collect. Additionally, this photo challenge only covers 20 days, but I'd like to go through the entire month of January, so I'll likely be thinking of a few more items to add to the list. If there's something specific from my collection you'd like to see or know more about, leave a comment and I'll post it before the month is over!"


I've compressed it all into three posts, and don't always feature photos, mainly because when we moved to Switzerland, I had to leave everything but the most essential Tolkien books behind. We came here with only six suitcases worth of stuff, which included clothes, a few kitchen items, important documents, and books. Mostly Tolkien, some Lewis, and a few other staples. I whittled the Tolkien down to one set of The Lord of the Rings, one copy of each major publication by Tolkien (including the posthumous ones), the twelve books of Middle-earth, and Humphrey Carpenter's biographies of Tolkien and the Inklings, as well as the Hammond and Scull books I own plus Rateliff's and Anderson's annotated copies of The Hobbit.

So much is still languishing in storage -- all the Dorothy Sayers, Owen Barfield, Charles Williams, and so on, plus Simon Tolkien's books, Anderson's Tales Before Tolkien, books by John Garth and Joseph Pearce and others, various random items (such as a tiny boxed set in French of the Father Christmas Letters) including translations in German and Turkish, and the ephemera that would make for good collection photos, such as the Lord of the Rings movie tie-in Monopoly set and jigsaw puzzle. I even have a teaser page from Vanity Fair c. 2001 with a photo of the cast in costume and on location, when the movies were just starting to be filmed and we had such high hopes for them...

All that said, here are the first seven of the 20 photo challenge items:

1. Your collection space -- see above!

2. First item you remember adding to your collection -- good question. The copies of The Hobbit and The Lord of the Rings that I first read belonged to my parents. What was the first item I bought for myself? Oh, it must have been The Silmarillion!

3. Your go-to copy of your favourite Tolkien book -- they're all favourites, let's say, but let's go with the 50th anniversary editions of The Lord of the Rings. I love reading about the detailed processes behind finding, collating, and correcting all the errata in all the editions over the years.

4. Item you splurged the most on -- I don't think I have anything truly rare. I know what I want, though: the 30,000$ Songs for the Philologists

6. Best deal you've scored -- Not sure. I have a couple of odd items, such as a book by one of Tolkien's students that refers to him in the introduction and acknowledgements. I got a lovely second hand copy of The Jerusalem Bible through the Australian branch of Abebooks. Getting any new Tolkien item is an excitement in itself!

7. Your most recent addition -- A Secret Vice. Just got the Amazon notification that it's being delivered this week!

Use the hashtag #TolkienCollectionand add your own!

I've previously shared some of my favourites of Tolkien's art: 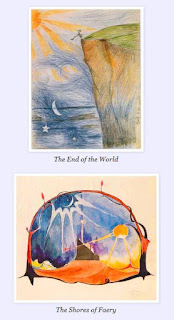 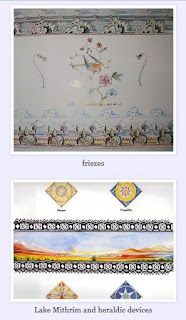 Are there any authors whose works you collect?

Alex J. Cavanaugh said…
I can only imagine how many books you have in storage.
My first Tolkien book was also The Hobbit.
I've collected most of Terry Brooks' and Preston and Child's books.
13 April 2016 at 09:36

Guilie Castillo said…
Wow... No, I'm not much of a collector (of anything... except dogs, I guess)... Too absent-minded, attention span too short :D But these look gorgeous, Denise. Thanks for sharing, and happy A2Z-ing :)

Hilary Melton-Butcher said…
Hi Deniz - I'd forgotten about Tolkien's art .. thanks for showing us these pieces ... he was talented. You certainly have loads of collections - at least they are in store ...

I'm such an eclectic person - that I don't collect a specific author - never have ... We were given the Hobbit as a Christmas present by my grandmother - I could never get into it at that stage ...

Deniz Bevan said…
Ooh, Alex, you might find out soon -- I think we're finally bringing that stuff over! It's going to be endlessly stressful organizing it all, but hopefully we can get that done quickly, throw out a huge pile of junk, and then I can take some proper photos!

Deniz Bevan said…
Ooh, Alex, you might find out soon -- I think we're finally bringing that stuff over! It's going to be endlessly stressful organizing it all, but hopefully we can get that done quickly, throw out a huge pile of junk, and then I can take some proper photos!