Sam, and A Story Snip for IWSG

hoto tribute to our Sam:

A while back I created the Sam and the Food Bowls hashtag on Twitter (I think you have to be logged in to see the full collection), all about Sam's rock 'n' roll lifestyle. His band recorded two albums, Eat Drink Man Woman, and Litter Box of Love Songs. 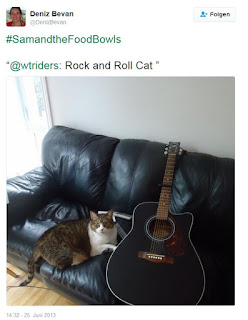 Over on the knitting blog we have: 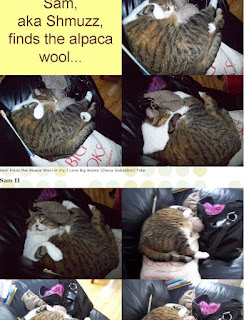 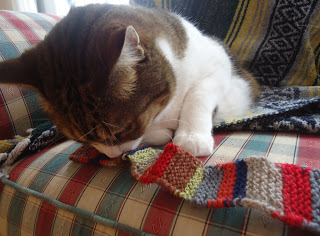 I'm also going to do something I haven't done for a while...post a snip! It's very much a first draft, so I feel rather insecure...

By way of background, Kedi (who was modelled after Frodo) is the talking cat from my MG The Face of A Lion:


"The Face of A Lion (middle grade, set in current year and AD 43), Book One of the Rising Sea series

When thirteen-year-old Austin's parents drag him along to a villa in Turkey they've rented for the summer, he hunkers down and counts the days until he can get back home to his friends in England. But that's before he rescues a talking cat, witnesses a bloody ritual that causes two people to disappear, and finds himself whisked back in time.

Nearly two thousand years in the past, he makes a new friend--and a new enemy. A powerful evil wants to prevent Claudius the Emperor's invasion of Britain. Austin has to act fast to ensure that the invasion does take place--or time and civilization as he knows it will never be the same."


In this snip, Kedi is talking to an old friend, Catullus, and a new acquaintance, a kitten travelling with Charles II:


Kedi, Catullus, and the kitten sat in a row on a low stone wall a few metres away from the hall. The kitten was -- there was no other word for it -- gambolling.
Kedi watched as he twisted about, chased after his own tail, then stopped and tilted his head to one side as the hall doors opened and the sound of merrymaking increased, before dimming again as the doors shut. The kitten crouched, as though he'd spotted prey, but the next second twisted about and pounced on a stalk of wildflower rising from between the stones.
"Rather energetic, isn't he?" Catullus remarked in a low rumble.
"I remember feeling that excited about everything. It was a good time." Kedi had grown to hold such excitement inside, not letting himself lose that sense of innocent pleasure, but learning to show it only at opportune moments.
He had had no reason to feel pleasure for some time now. Not since --
"I remember, too," Catullus said. "But I must confess that comforts weigh more heavily with me nowadays. I am glad the journey here took no time at all."
"Ah, yes. Between myself and his Majesty, we try to do our best for all who join these houseparties. I, too, might confess something: if it had not been for his Majesty's fog [a travelling device], I would have had more trouble than usual. One of my... Well." He curled himself low against the wall into a submissive position. "Cat's bane," he said in a whisper.

Catullus, and the kitten, were immediately alert. Both sat up tall, and the kitten was wise enough to take his cues from Catullus; he grew still, though the tip of his tail twitched; too young to master himself completely.
"Which was it?" Catullus demanded.
"First."
"Ah. You can relax." Catullus unbent and lowered himself to Kedi's level. "I have lost two."

The kitten looked from one to the other. "Could you explain, please, sirs?"
"If no one’s told you yet, then it's high time you learned, little one." Kedi sat up once more, and then took a moment to survey the grounds, listening. No odd or out of place noises, no unexpected scents. All was well at the houseparty so far.

"Cats have nine lives," he began. "Everyone thinks the lives are within one cat, but they are not. At least, they are for ordinary cats. But some of us, those who travel in time, for instance, have one soul -- and nine selves. My soul, Catullus' soul, your soul, when we are in a place like this, shows its true self. But to journey on Earth, we must inhabit bodies. You can search for your own, if you like. I can teach you how. I myself know all nine of mine. Catullus?"
"I have lost two, as I said. Mine lived in some difficult lands. Of the remaining seven, I have yet to find one."
"Yes, it takes time. But it’s important to find them, little one. It helps, when the moment comes that you lose one."

"It was recent, then?" Catullus asked.
"Last month. I felt him slipping, and joined with him, and was there for the last few weeks of his life. Worse, I lingered after he was gone, and the friend he had lived with his entire life also passed away. He, too, belonged to a travelling soul but in all that time I had never met him. To do so only when he had both lost one of our Nine was very bittersweet."

"Can't you protect them?” The kitten piped up. "If you -- we -- can travel across space and time, can’t we do something to make sure the bodies holding our nine lives never die?"
Kedi turned away, unable to answer such a question in a polite manner. He caught the look of pity that Catullus gave the kitten. Pity at his ignorance? Or simple sorrow that they all lived in a world where such questions needed to be asked?

He mastered his impatience and turned back, just as Catullus replied.
"We are not masters of our mortal flesh. Nor of anyone's. We might live, and learn, and grow, under rules that differ to those of others, but the essential laws of the universe hold true for every created being."
"Don't waste your time on futile attempts to alter those laws,” Kedi added to Catullus' statement. "There is joy to be found everywhere. Enjoy every moment that you have for learning and for sensing. For gambolling."
He pounced on the kitten and rolled him over, batting playfully. Catullus threw himself in, and all three leaped up and over and around in a mass of fur and whiskers, then set off on a mad chase along the top of the wall.


Are you sharing snips or drawings or photos for IWSG Day?
Post links in the comments!

Sheena-kay Graham said…
I am sharing something in my IWSG but no pictures. Loving the cat and wouldn't mind switching placing for a day. Now that's a great use of twitter and hashtags.
1 June 2016 at 06:39

Cathrina Constantine said…
It's always sad to lose one of your precious babies. This past year I lost my 20 y/o Kitty (yes, that's her real name) and my 15 y/o dog Otis.

Murees Dupè said…
I am sorry for your loss. The pictures were great. Both cats are so beautiful. I enjoyed your snippet. I don't think you have anything to feel insecure about. Your story is well written. Wishing you the best.
1 June 2016 at 06:52

Hilary Melton-Butcher said…
Hi Deniz - so sorry about Sam - wonderful photo shops .. especially the stealing one .. 'just a little from the side?' -they are a delight.

Love the story .. really fun to read ... and definitely a goer to be published at some stage ...

Tamara Narayan said…
Sorry to hear about your loss. I lost my 18 year old fur baby this past November. Those are beautiful pictures. (I wish my two cats would get along so well.)
1 June 2016 at 10:07

Joylene Nowell Butler said…
Sam was very beautiful. He looks like our Fluffy, who passed away a few years ago. In fact, we've lost 7 cats in the past five years to mostly old age. It's a long story. We have 2 cats left. I love them dearly. Losing a cat is a painful experience. But loving them adds years to our lives.
1 June 2016 at 10:50

Susan Gourley/Kelley said…
Everyone should have a picture of their cat in a shoebox. Sorry for your loss.
1 June 2016 at 11:34

Jen Chandler said…
Oh I am so sorry for your loss! That pictures are wonderful though. You'll be very glad you have those.

Thank you for sharing your snippet. I really liked it! I love the attitudes of the three cats, especially Kedi.

Crystal Collier said…
Cute kitty. Passing you cheese. It doesn't dry the tears, but it makes the belly happier. Which improves happiness.
1 June 2016 at 13:07

Suzanne Furness said…
Oh so sorry to hear about your loss. Sam sounded like a real character and those are some great photos to keep forever. Thanks for sharing a snippet of your story with us today.
1 June 2016 at 14:08

Birgit said…
I came over from Alex because i read what you wrote...very sorry to hear about your loss. Your cat looks like he had quite the personality and you paid a loving tribute to him. My Katie (Black Lab) passed away 4 years ago and I still miss her. We now have one dog (Wallace) and 5 cats
1 June 2016 at 14:52

Nicola said…
sorry for your loss. Lovely pictures :) You are a lovely writer and I thoroughly enjoyed your snippets. Keep going! Sending you lots of strength and inspiration across the ether. Thank you for the heartfelt post.
2 June 2016 at 14:01

Zan Marie said…
{{{{hugs}}}} again for losing Sam. May he live long in your memory and Twitter feed.

Deniz Bevan said…
Thanks everyone for all your kind words. I wish I could share some anecdotes or memories and thoughts of all the good times, but it's still too painful to write about openly :-(
15 June 2016 at 03:13