Tolkien in Staffordshire and Birthday Toast

On 3 January, it's time for the annual toast to The Professor. "All you need to do is stand, raise a glass of your choice of drink (not necessarily alcoholic), and say the words “The Professor” before taking a sip (or swig, if that’s more appropriate for your drink). Sit and enjoy the rest of your drink."

"To celebrate Tolkien’s twelfthty-fifth (125th) birthday on 3 January 2017, the Tolkien Society invites all Tolkien fans to raise a toast to the Professor.
Let everyone know what you’ll be drinking and where in the comments below, and share your pictures on social media using #TolkienBirthdayToast."

I'll be having a sip of Talisker, and maybe some Swiss Highland Whisky! 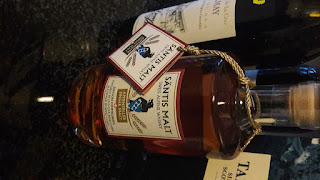 Back in November, I had a chance to visit the J. R. R. Tolkien in Staffordshire exhibition at its stop in Stafford:

"Description:
The exhibition focuses on the time Tolkien spent in Staffordshire during the First World War. Visitors will be able to explore the writings, poetry, and artwork Tolkien wrote in the county, as well as learn more about life for soldiers in Staffordshire during the Great War.
During the Great War Second Lieutenant J.R.R. Tolkien of the Lancashire Fusiliers was stationed in the county, first at Whittington Heath, near Lichfield, next at a musketry camp at Newcastle-under-Lyme, then at Rugeley and Brocton Camps on Cannock Chase. After his marriage in March 1916, Tolkien’s wife came to live in Great Haywood so that she could be close to him. Tolkien regularly visited Edith in the village until he was posted to France in June 1916.
Tolkien returned to Great Haywood in early December 1916 to recover from his traumatic experiences at the Somme. He lived with Edith in a cottage there until late February 1917 and during this time created his first mythological stories, in part inspired by Staffordshire landscapes and experiences.
After a brief posting to East Yorkshire, Tolkien returned to Staffordshire in 1918 and lived in a cottage at Gipsy Green, Teddesley Park, near Penkridge, where other important work was undertaken.
Copies of original artwork, of domestic scenes and landscapes drawn by Tolkien in 1918 in Staffordshire, will be on display as will photographs specially loaned by the Tolkien Estate and Bodleian Library."


Here are some of the photos I took: 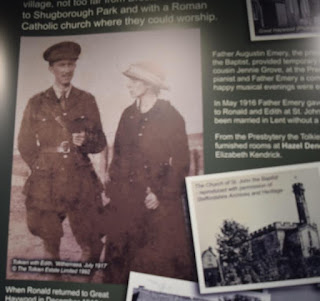 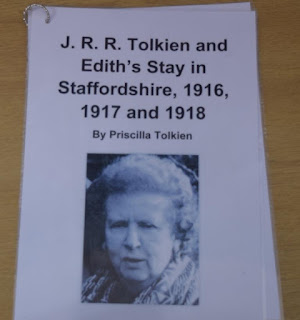 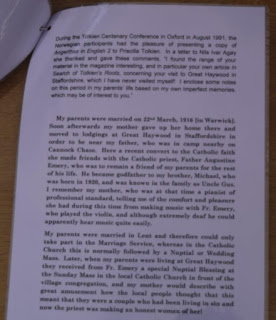 A short memoir by Tolkien's daughter 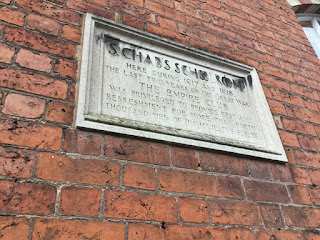 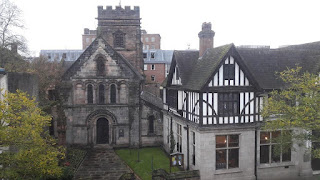 View from our hotel window! 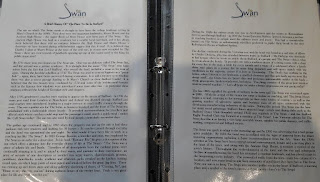 Apparently, Dickens once stayed here, and was not impressed... 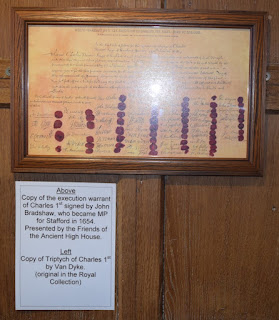 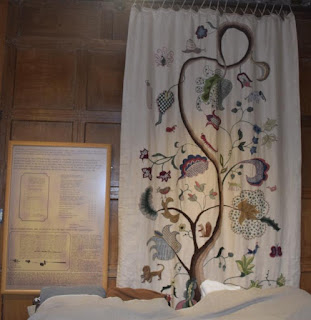 Two photos from inside the Ancient High House, the largest timber-framed Tudor structure in England:
A copy of the execution warrant for Charles I, and a tapestry that reminds me of Tolkien's Tree of Amalion 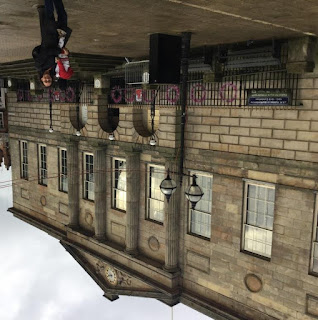 Hanging (literally, I guess!) in front of the Shire Hall Gallery.
I really don't understand why Blogger keeps turning my photos upside down and wrong way up. 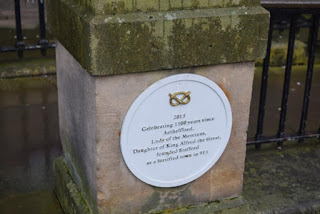 Celebrating 1100 years since the founding of Stafford in 913 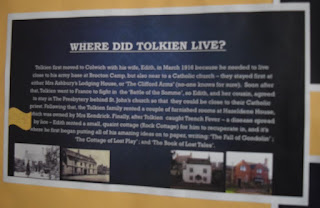 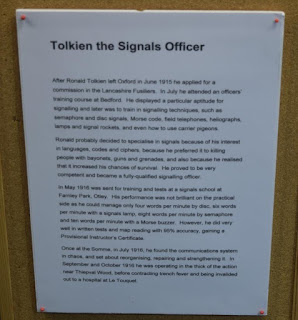 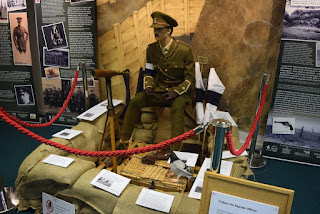 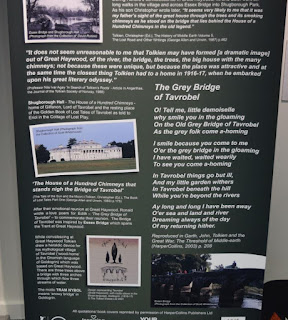 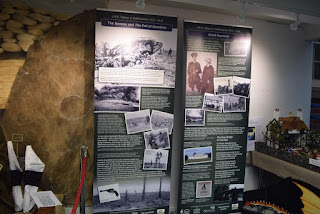 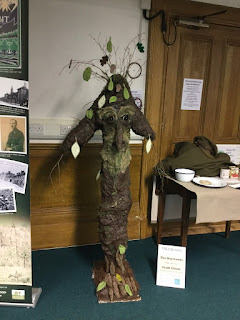 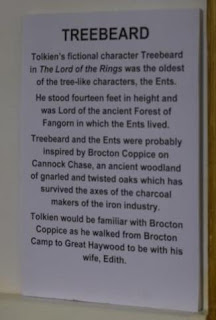 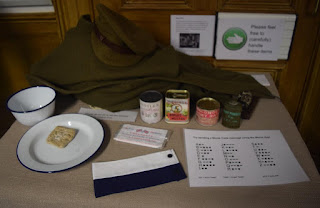 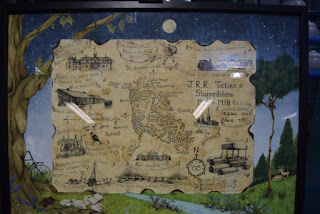 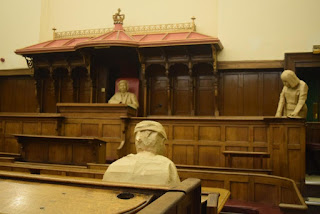 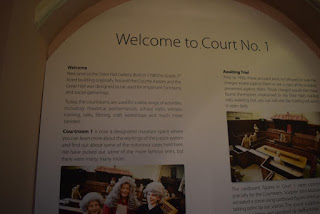 I'd forgotten that the courts in Stafford were also where the George Edalji trials took place.
I read all about him and Arthur Conan Doyle in Julian Barnes' Arthur and George 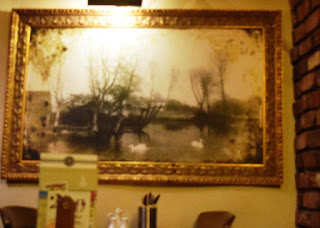 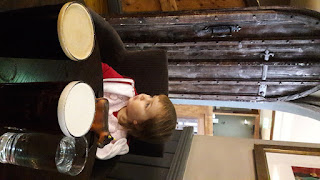 An interesting painting and a baby, at the pub... 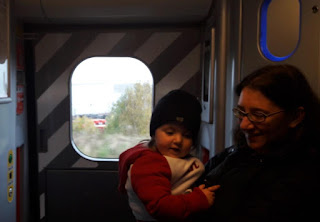 Hilary Melton-Butcher said…
Hi Deniz - so glad you got over to visit the exhibition ... it looks to be really interesting and covered a range of events - the War, and the cottage, his letters ... but I guess more particularly his art work - certainly if one can draw, one can record the area and landscape. Lovely photos ... cheers Hilary
29 December 2016 at 02:42

Nasreen said…
Interesting post Deniz! Wishing you and your family a Happy and Prosperous New Year!
31 December 2016 at 21:08

Chrys Fey said…
That would sure be a neat exhibit to go to. Thanks for sharing your pictures!

DMS said…
The exhibition must have been fascinating. I enjoyed learning more about it here and seeing the pictures (I can understand your frustration about photos that go upside-down by themselves- I recently had the same problem).

Wishing you a happy and healthy 2017!