Winter in Switzerland Photos, and ROW80 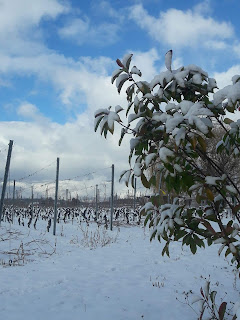 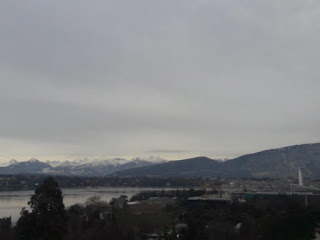 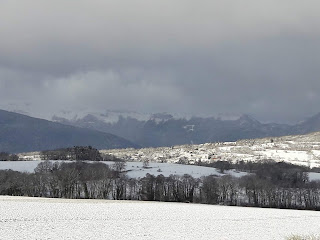 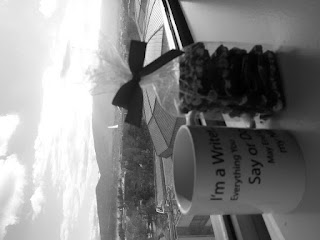 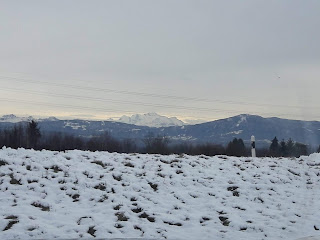 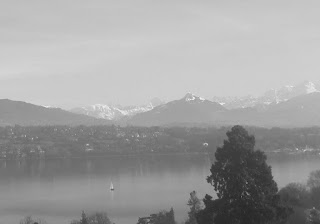 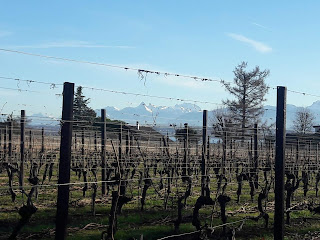 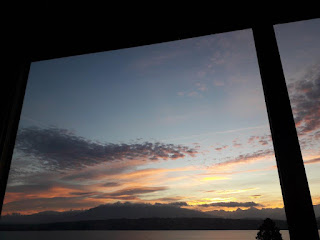 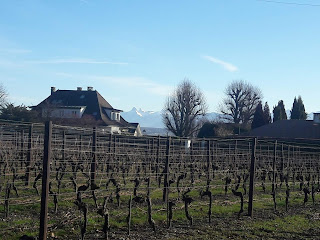 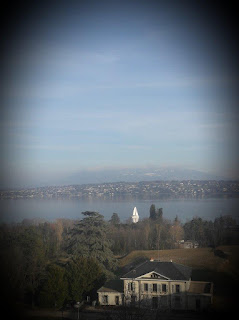 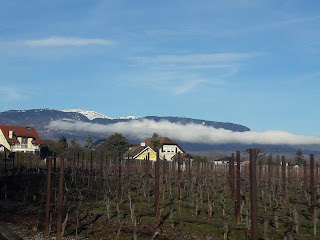 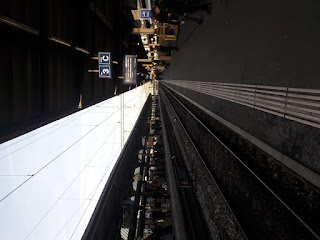 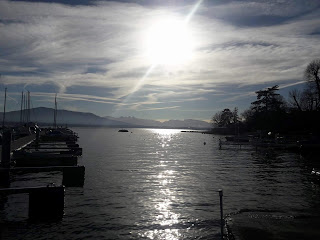 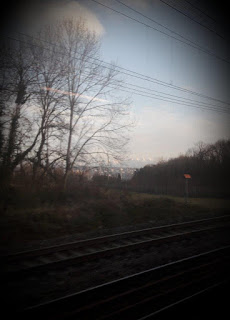 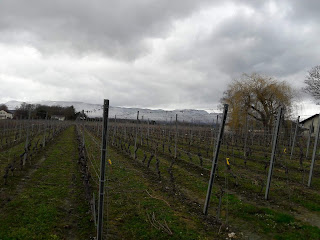 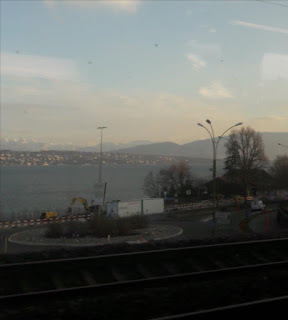 Alps from the train! 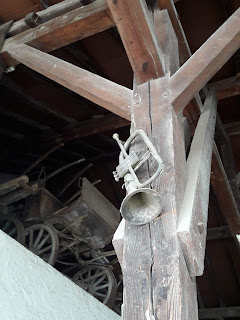 Decorations at the nearby stables 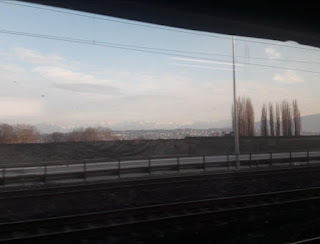 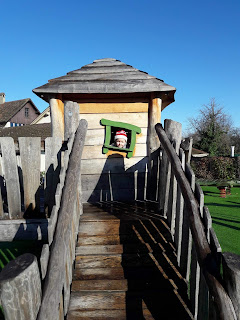 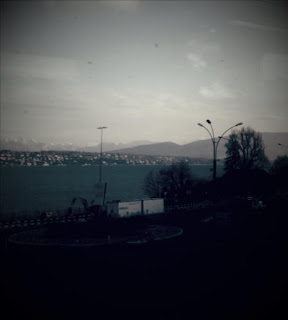 More Alps from the train! 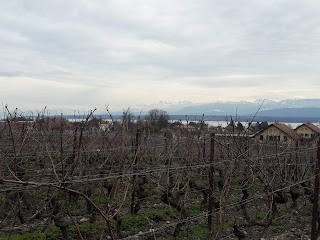 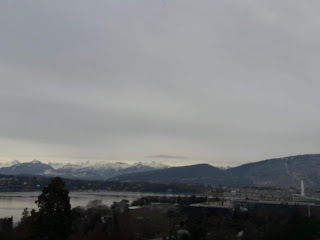 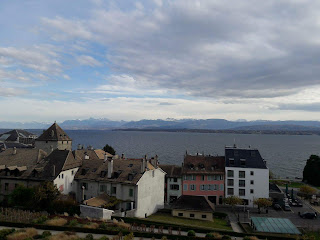 And a brief ROW80 update! Both craft projects still on the go. I'm learning to chain stitch for the first time! Ihaven't done any editing yet, too focused on school, but did manage to get in the February writer's exercise on the new version of the old Compuserve forum. The goal was to reveal setting through character, rather than getting bogged down in description. Oddly enough, my setting featured winter in Switzerland...

Without giving away much background, this is from Christianne's point of view. The city is Geneva, and that Christianne is dealing not only with illness but with addiction recovery.

After Rory left for his shop, Christianne didn’t spend any more time at the appartement, but headed out into the streets. Not that there was any less temptation there, but at least she did not have to be hemmed in, by four walls and a list of tasks. Including preparations for their wedding. She held up her engagement ring as she stepped out of the front door of the building, and the row and curl of diamonds sparkled in the weak sunlight. A list of tasks, many of them exciting ones that she looked forward to.

Yet she could not start any of it until she got through the tests at her oncologist’s this afternoon.

She set off on a long walk, pulling up the fur-lined hood of her ski jacket, to shield her face from the fierce bise wind. She’d go up to the Promenade des Bastions, up and over the old city walls, and come down along rue de Rhone near the lake. Do a bit of window shopping along the expensive boutiques, before dropping in at Chez Philippe to retrieve the scarf she’d left behind on Friday.

Then the bus up to the hospital.

She took it slow, stopping twice for an espresso, to warm up and not to be too tired before she’d even had her blood taken. She sent Rory a message, but he didn’t reply; he didn’t always hear his phone if he was working down in the garage rather than up in the office. He’d promised that morning to leave early and pick her up from the hospital in the evening. If she didn’t try to hide from him, as she had been, his support could help lift her. In the next few days, anyway, before she received her results. As for after, it was comforting to know he’d be on the long road.

Only it didn’t shorten the road any, or lower the hurdles.

She pushed off from the cafe table and headed back out into the cold. Down side roads, she caught glimpses of the lake, and then the Rhone once she’d walked past the first bridge. The surface of the water curled in endless ripples in the strong wind.

She stood in front of the Chanel window for a while, debating whether to enter and find out the exorbitant price of the knee-high suede boots that had caught her eye.

Maybe later, when they’d booked the venue for their wedding reception. She went on, and came out at the end of the row of shops, and turned the corner towards the restaurant. She’d timed it well, as it was past noon and they were already open.

The hostess directed her upstairs, saying there was a box kept behind the bar for that sort of thing. She trudged up, and halted at the top to let her eyes grow accustomed to the dimness. There was no one behind the bar, and there were hardly any customers seated at the tables, except for a handful by the window and a couple at one table beyond the bar. The woman looked familiar.

She moved up to the bar and, from behind the shield of her massive hood, stole another look. She recognised the back of Rory’s head, and then it was easy to place the woman.

She’d only seen his ex-wife, Mercedes, once before, at Melis’ wedding, and that from across the lawn, directly after the ceremony. Mercedes had not approached them, and Rory had made it abundantly clear that he had no desire to speak with her. She had not stayed for the reception.

Two choices, now. Approach them, which might cause a scene. Or, and even as the thought came she acted on it, sidle round to the end of the bar nearest their table and eavesdrop. Getting in close was easy; her coat covered every part of her. But it also muffled her hearing, and the restaurant’s noises, clattering cutlery, tinkling glasses, thumping techno, and steaming espresso, effectively drowned out the rest.

What could they possibly be talking about?

Susan Kane said…
My daughter lives in Bern, Switzerland, and your photos delighted me. We always go there in summer when humidity and heat settles in the lowlands. Someday we will travel when it is cold.
22 February 2018 at 17:02

Hilary Melton-Butcher said…
Hi Deniz - loved the photos ... looks similar to here - at the moment. Great you're learning chain stitch ... you are a lady with lots on the go and nimble fingers - cheers Hilary
26 February 2018 at 15:18

Neurotic Workaholic said…
I love that coffee mug about writers; I'd buy it for myself if I could find it here! And I like the excerpt. I think if I saw my fiance meeting secretly with his ex, things would get thrown...at the very least.
27 February 2018 at 16:45