have been rereading a bit more than usual lately.

What is usual, is that my rereading involves Agatha Christie.

Work is busy and there's an AMA writing exercise on, so what do I do?

Sort all my Agatha Christie books of course!
I printed out a bibliography, and for the first time ever, I went through the whole pile: 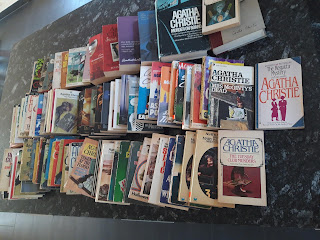 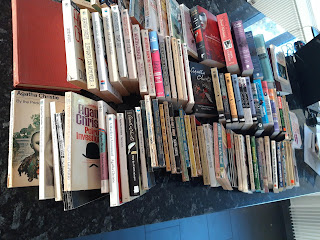 I weeded out about 15 duplicates, and figured out that I'm only missing 10 books! I've read them all, at my mother's or grandmother's, but those are the only 10 I don't own. Technically, I have two of the short story collections on the Kindle app as well, along with Star Over Bethlehem, but I didn't count those.

Here are the sorted rows!: 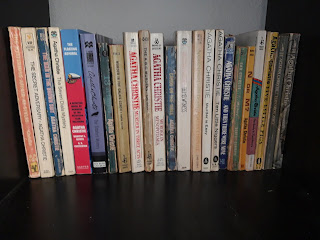 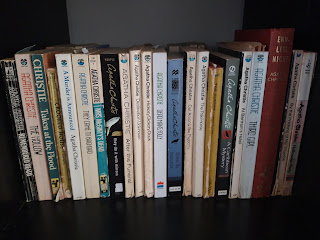 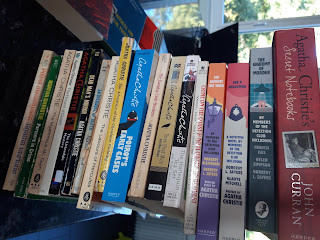 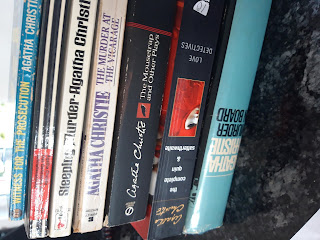 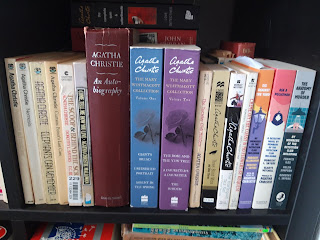 I also reread Lullaby by Auden:

I'd forgotten how moving it is. And I've just (re)learned that his grave is in Austria! On his grave marker is written "In the prison of his days / Teach the free man how to praise". We'll have to visit it sometime, maybe passing through Zurich (which we haven't been to yet!), to visit James Joyce's grave.

The AMA continues apace! Here are some more of Mawdlen's answers (there are also many other scenes featuring her interacting with the characters of other writers):

Daily Question #3: Who in your life has had the best and worst luck?

Ydw, there is definitely a monkey in here. And is that bird speaking?
She pulls a trick she's caught Da at, when he's in his cups: closes one eye and tilts her head, in an effort to understand better. Or steady his movements.
The bird continues to talk, and to sway a little. Almost staggering. Or perhaps swaggering is the word.
She opens her eye, to see Mercutio hurrying past with a tray.
"Small beer, did you say?" she calls out.
"Aye, aye!" he replies over his shoulder. "Nothing stronger!"
The bird, then, is real. As is the monkey, cackling away up on a high shelf.
She takes a slow sip, and thinks about the question that floated towards her. Is it good luck or bad, to arrive at a place like this?
Oddly enough, it seems good. Interesting people, intriguing mysteries, irreverent fauna. There's none of that need to keep glancing over her shoulder that she feels in any of the places Master Crook or Lady Amethyst haunt.
To be sure, neither is there the sense of ease that comes from having Santiago by her side.
She wonders about his luck. He has had much success, while they were apart. How much was due to luck, how much to fate, how much solely to his abilities?
She might wonder the opposite of Da, and his failures. How much was due to luck, how much to fate, how much to his abilities -- or lack thereof?
It does not do to doubt one's parents. She will put down Da's downfall to luck then, of the worst kind.
And the best...
Some might say her sister, Gaenor. Married young, to a good husband; blessed with four children, all living; working a profitable farm, with no debts. Ydw, some might call that the best luck.
But what of that day five years ago, when she brought Da his noon meal, and luck or fate, brought her face to face with Santiago?
Whatever happens this week, at the banquet, or with her parents, meeting Santiago was certainly the best luck of all.
But she'll have to have her wits about her, use all her abilities, if she's to keep him.


Daily Question #4: What aspect of daily life in your world would surprise someone from 100 years ago?

Mawdlen holds her cup at arm's length and peers at it.
Did they have small beer in 1371? What did they drink? Some concoction or other, most probably, to ward off the Plague.
Churches did not ring their bells at noon back then. And they had not yet invented that wonderful instrument, the harpsichord!
Oddly enough, thanks to Da's stories -- and the tales he's read to her from Malory -- the time of Arthur is more real than even half a century ago, let alone so many generations as to make 100 years.
Speaking of -- was the Hundred Years' War being fought then? Perhaps someone of that time would be surprised at how quickly battles were resolved nowadays. Look at Edward, returned to the throne this year before spring had even turned into summer!
Perhaps the most surprising aspect might be how much everyone seems to travel. There are more ships than ever, headed to all sorts of ports on the continent and beyond, so far beyond that new maps are continuously being drawn.
In a place the size of London, it's not unusual to hear two or three different languages a day being spoken, especially down by the docks. And the number of foodstuffs and other materials being traded -- a thought that brings her focus back to Master Crook.
Certainly not something she wishes to dwell on. Anything is better than that.
Perhaps she should seek out the animals. When will she ever get another chance to talk with a bird?

She wanders closer to where the yellow bird is holding forth, still carrying her cup of small beer, and ponders the question.
Not boots or hearts or families. There's bread, but though the word broken is used, it's not quite right, is it? Breaking bread with those dearest to you is not the same as breaking an object, or a promise. When you break bread, you share it, and it remains part of the whole.
A promise, now... But there the question doesn't fit, as you can't have a whole promise.
She giggles quietly to herself. Logic was never easy. No wonder Da ended up telling stories instead, all those times he tried to give her and her sister a few lessons.
An egg!
Please to have solved the riddle, she clambers onto a stool at the bar, hard by the knot of men surrounding the bird.
But wait -- a whole egg, soft boiled, is also tasty.
Not a marriage or a contract or a trade. Not a cup or a candlestick. Not a mind or a soul.
She drains her cup, listening with half an ear to the bird.
Then she has it. The ground, of course.
Birds must wait for worms to break through. Small creatures must burrow to make homes.
One must break up the earth to sow seed or lay the foundation of a house or a cathedral.
One must fell trees to build ships.
To sail from one part of the earth to another.
In order for lovers to meet...

What are some good questions you've asked of your characters?

Hilary Melton-Butcher said…
Hi Deniz - Agatha was a prolific writer ... as we see now in the various tv series that are available.

I wonder if you've read: The Grand Tour: Letters and Photographs from the British Empire Expedition 1922 by Agatha Christie was published on 17 Jan 2013 ...

Which I hope I've got here to read at some stage ... my intention during this covid winter is to read voraciously ...