Ask Me Anything Writers' Houseparty and Lots of Baking

It's not quite a writers' houseparty, but it's close!
Our characters have begun to arrive at the world between worlds (reminiscent of CS Lewis), and to answer the questions posed to them...

Here are the guidelines from thelitforum:

"How does it work?

Check the Daily Questions thread for a new prompt each day, and respond in your character’s thread using their point of view. While this exercise has traditionally been undertaken in first person POV, you may use third person or any other POV that works for you.

Where possible, answer any other questions that may be posed in your thread by other authors/ their characters. If you find you’re running short on time and attention, end your conversation without posing a further question in reply. If you’re finding the interaction useful, keep it rolling by reciprocating.

Drop into other threads- either using your character’s point of view or as yourself- and ask additional questions of others, too. While this is not quite a free-flowing House Party in which the characters move through a scenario, you will find storylines develop across various threads.

While your focus should be on your own characters’ threads, participants are expected to engage with others across the threads to the best of their ability. You’re not expected to keep up with everything, but please remember that reciprocal interaction makes the writing world go round."

Here's what I wrote for the first two daily questions (there've been other questions asked by other characters. I'm hoping to compile them all the way I did for the last AMA -- great writing prompts!):

[Daily Question #1: What was your most recent lie?]

What haven't I lied about recently? And to whom?

She looks around, wondering where Da can have gotten to. This pub doesn't look anything like Da's local, The Golden Perch, or that rowdy place he was in last, The Man In the Moon. There are signs here and there, more writing than she's seen in a while, and she slowly sounds out the letters. Roominghouse.

Duw, if this is another place like the stewhouse she accidentally got dragged into...

But it can't be, not with a publican asking her such an outlandish question.

"I've been lying to my parents recently," she blurts out, not sure why she's confiding in a stranger. "They don't know about the work I've been doing to earn a bit of coin. And of course I haven't told them anything about what went on between Santiago and I, last night, at the banquet.."

She stops abruptly. If Da is here, he might have overheard.

She casts another glance around the large, noisy room. No one seems to be paying her the slightest attention. Yet.

Deniz's AMA September 2020: Mawdlen
[Daily Question #2: What are you interested in that most people are not?]

The question comes this time not from the publican but from someone who looks a bit more...nearer to herself, as if that makes sense.

"Mercutio, mistress. I've a nice small beer for you." He sets down a pewter jug and cup. "The publican means well, but he gets a mite distracted."

"Diolch," she says, slipping into Welsh, but Mercutio takes it in his stride.

"Think on your answer, now," he calls and slips away.

She sips from the cup and thinks, as bidden, though truly, the answer is all-encompassing.

She fell in love with a sailor, and waited five years for him, something none of her friends were ever likely to do.

She accepted to work with Lady Amethyst – something her friend Grace would never have done, no matter how dire her straits – and she enjoys it.

Odd, that. Of course, many womenfolk help their husbands with their trades, but none of those that call on Mam have ever professed joy or excitement in it. Perhaps their litanies of complaints are meant to disguise their pleasure...

Another glance round the taproom. So many animated faces. If this is truly a different time – one in which women wear trousers! – perhaps it's one where she could choose her work, and not hide her interest in it. Where she might successfully decide to continue, while yet rejecting the aspects that involve Master Crook.

She shudders, and takes another sip. There's always a worry at the back of a good, it seems.

This all fits in with the last of my ROW80 goals for this round, which is ongoing edits on Captive of the Sea, Mawdlen and Santiago's story. Hoping to be beta-ready before Christmas!

And I've been baking a lot again... 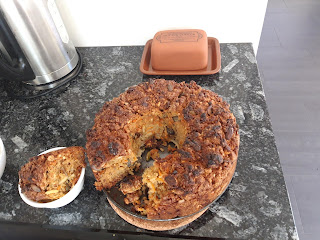 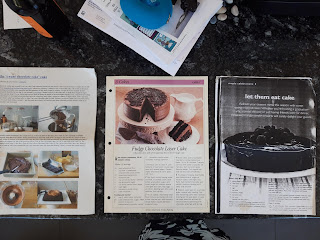 Testing three cakes before choosing the best one for the birthday cake! 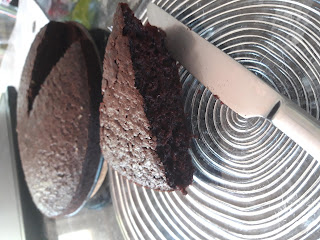 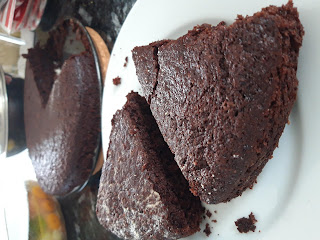 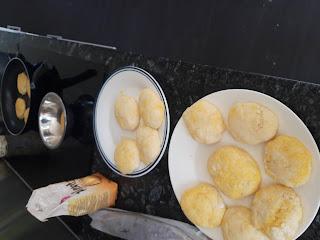 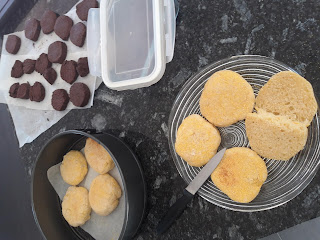 In between, making English muffins! It took three tries to get it right! 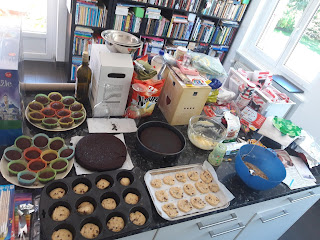 Everything all at once! 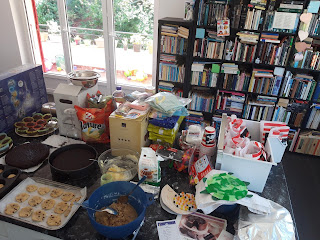 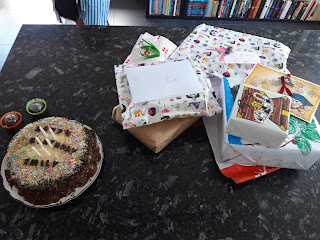 We chose the fudgy one! Happy birthday! Now we are six. 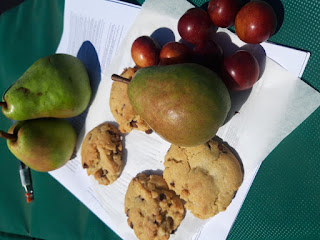 Brown butter cookies and fruits from our landlady's garden. And a bit of editing...
Please share some of your favourite recipes!

sage said…
Your baking looks lovely and makes me hungry. The party idea of bringing your characters and having them answer questions sounds like a fun idea (if I wrote fiction).