- January 04, 2009
Jenny's got no computer, and I... I've got no glasses. I was merrily cleaning my glasses yesterday morning, when SNAP, the bridge came apart, smack in the middle. My prescription hovers around the -12 mark, with astigmatism thrown in for fun, which means that no glasses = virtual immobility.

I got this photo off Wikipedia: 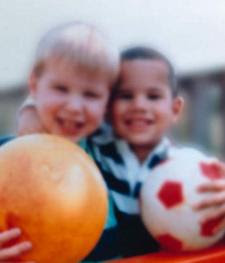 Mine's a lot worse - I probably wouldn't be able to separate the stripes or octagons on the shirt and ball, and the kids' noses wouldn't be so well-defined. Their hairlines are also too clear cut.

About the only thing I can do without glasses is shove a book in my face (partly why I've been rereading all those Agatha Christies (see Books I'm Reading sidebar); the other reason might have something to do with the holidays and the weather (-20 degrees Celsius practically every day) - last year I was rereading The Lord of the Rings around the same time).

You'd think a bit of tape would solve it but no... tape's too weak and the two pieces (or halves) of the glasses fall out of the two ends of the rolled up tape much too easily. Plus we had a party to go to last night! In the end, electrical tape worked for a few hours, but that stuff has it's own problems; it just doesn't stick for long periods.

Went down to LensCrafters today, but the optometrists don't work on Sunday, so no free samples of contacts... They said my only option was to buy new frames and get temporary lenses made, which for me, means thicker lenses than usual and no anti-glare (since I pay extra for thinning and anti-glare on my glasses), and it would take an extra hour and a half, since my prescription is so high. Fine, I just want to see! Then they said I had to have metal frames, since my prescription... yes yes, I just want to see! So they bring me a few frames that they'll be able to use, and the cheapest one is 300$! For a piece of metal? For temporary glasses?

But what can I do, right? I have to see, and I need something to wear while I order the "real" glasses (which themselves will cost upwards of 600$). If they don't happen to have 90$ frames lying around, this is my only option. Then word comes back from the technician - sorry, we can't do it anyway, our equipment just doesn't meet your needs because your prescription...

Well, anyway, I was so relieved about not spending 300$ that I'm happy to "stick" with my tape :-) Even though it means going to work tomorrow looking like... But at least the optometrist will be there tomorrow (I hope!) and I can at least get contacts or something.

Actually, the main problem now isn't so much the tape in my line of vision or the constant threat of the pieces falling apart - it's how dirty the lenses get with so many fingers trying to tape them together for me, and I can't clean them properly because too much movement causes them to fall apart again. Dirty lenses, ick ick ick.

AYDIN ÖRSTAN said…
You need to keep an old pair around for times like this.

I recommend that you buy the sturdiest metal frames you can afford to avoid incidents like this as long as you can. After a while they start to get shaky too.

Deniz Bevan said…
Yes... afford would be the key... I tend to replace my glasses every time one breaks/gets lost in the sea, so I've never had an older pair as a backup. Given what happened today with the 300$ "temporary" pair, it's no wonder I've never bough a backup before. Plus my lenses cost so much that buying two pairs at once would roughly be about 1000$. Darn it! None of this would have been a problem if I could have snagged some temporary contacts - we'll see what happens tomorrow...
4 January 2009 at 17:26

Lynne Sears Williams said…
Oh dear. I remember breaking eyeglasses and using tape to piece them together. Then my parents bought me (hard) contacts and I spent a lot of time popping them out in inconvenient places. Like a nice restaurant,where everyone was flagged not to walk over to us, or dropping one into a sink drain. My mother could always see a contact before anyone else but my dad became a bit annoyed when he had to take the plumbing apart. Or I'd use a paper towel in a college restroom to write: "Please don't use this sink, lost contact, looking for a plumber."

I never could afford to have backup specs, and if I bought expensive sunglasses I always lost or broke them. So, I bought cheap sunglasses, which survived nicely.

Deniz Bevan said…
Thanks Lynne!
I don't know how you survived hard contacts - my mother wears them as well, but my optometrist tried some on me once and I was yelling and screaming in pain :-)
My sister's a good person to have around when you lose eyewear - we were down at Montreal's Old Port once in a crowd, watching fireworks, when someone knocked into me and my glasses fell. I yelled out "stop everything, my glasses are on the ground!" and my sister had found them and given them back to me while everyone else was still all "what happened? what's going on?"
16 January 2009 at 08:56