here's an episode of Star Trek: The Next Generation that features a revolving door on a planet in the middle of nowhere. 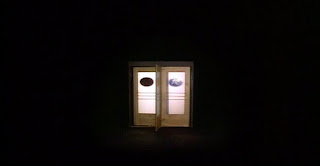 The characters step through the door and enter a Vegas-style hotel called The Royale – darkness and void behind them, and light and music and people on the inside.

That's what reading is like. (Never mind that, on the show, they're trying desperately to escape.)

Some books you read as you revolve in the door, and you come out the other side having gone nowhere.

Other books bring you into a sort of vestibule, and you hang out in the lobby for a while.

Then there are the real books, the good books. You take one step into that revolving door and a wind of language shoots you forward and you stumble into an entire world, filled with laughter and tears and a host of people you're so glad, so proud to be with. That same wind had better return and push you back out the door or you'll never leave.

It's a breathtaking rush, that feeling of dropping in amongst characters you'd be honoured to have smile at you, and stories that linger inside you for days and weeks and years.

These are the books that make you keep reading, that you would love to write.

I've been very fortunate - this weekend, I read two such books. One was Diana Gabaldon's The Scottish Prisoner.

And the other was Kristen D. Randle's The Only Alien on the Planet.

"He never speaks. He never makes eye contact. No one has ever touched him. They say he's retarded. Autistic. Strange. His name is Smitty, but everyone calls him "The Alien," and Ginny is intrigued. She's been feeling like an alien in a strange world since she and her family moved here from the West Coast. Against her first impulse, Ginny vows to make contact with Smitty. To be his friend.

But still waters run deep. And Smitty is like the ocean. Ginny soon finds herself being sucked under – going out too far. But Smitty is the one who could drown. Because the world he's created is safe from love, from pain, from everything. There's no room for anyone else. At least – till Ginny comes along..."

As Ginny says: "That's what I love about good films and good books – you can climb right into them and be there. I just hate it when I'm doing that, and then somebody butts in and messes with my concentration."

Randle writes in the tradition of Norma Fox Mazer, E. L. Konigsburg, and two other books that made me cry in the last few months: Looking for Alaska and The Summer of Skinny Dipping.


Giveaway winner!
Thanks to all my 300+ followers! The winner of the contest is...
Zan Marie!
Let me know which of the four books you'd like, Zan Marie.

Speaking of contests, guess what? Katharine at the Insect Collector is giving away awesome bug prints like this one: 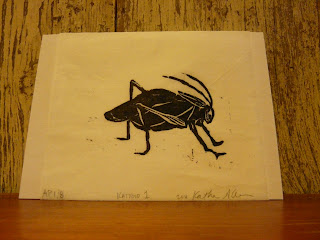 I wish I could draw like that.
Aaaaannnnnd... here's the revolving door:

Nadja Notariani said…
Congrats, Zan Marie! I'll have to check out a few of those titles. I want to read for a few weeks before I finish my NaNo novel and go into edits again!
15 December 2011 at 13:12

Anonymous said…
"darkness and void behind them, and light and music and people on the inside." Sounds like a short I wrote about the Internet.
15 December 2011 at 15:20

It's really awesome ms, let me know what you think!

Ooh, someone else who's read it, Carol and Medeia! I've got to get her other books too, now.

Thanks Michael, Eagle, and Denise!

I'm looking forward to my reading week, too, Nadja.

Neurotic Workaholic said…
Good books always make me happy. They're the kind that I always end up finishing in two or three days because I can't stop reading them; even when I'm not reading them I'll find myself thinking about what will happen next.
16 December 2011 at 02:21

Deniz Bevan said…
You remembered better than I did Ryan - I had to Google it.

Me too, Neurotic. And then I feel badly for having read so quickly!