Interesting question for this month:

Writers have secrets!
What are one or two of yours, something readers would never know from your work?

The two main characters from Out of the Water, which takes place in the 15th century, were named after my grandparents. I masked the names when I gave the book to my mother to read!

Here's one about Summer Fire, which is available now through Carina Press and on Amazon!: 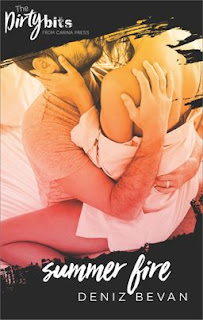 "You know how it is with Canadians. We come alive in the summer."

Ayse had resigned herself to an interesting—but in the end unromantic—trip visiting family in Istanbul. Great-aunts, touristy sites and endless meals…until she meets fellow doctor Hakan.
All tanned skin and defined muscle under his polo shirt, his kisses cut off her breath, making her dizzy. His every touch is a thrill.
Ayse wants all of Hakan at once. His sweet mouth, the heat of his body against hers, their heartbeats slowing together.
A holiday romance might give her some blazing memories come the lonely winter, but maybe, just maybe, the fire between them doesn’t have to be as fleeting as the summer.

And the secret? When I first gave the book to my sister to read, she commented "it's just like what we always dreamed would happen to us on our trips!"

Visit the IWSG blog for lots of great tips and conversation!

The first featured the faces of the main characters from Summer Fire! And some knitting...

The third was all about Druid's Moon

The fourth was: RIP Dolores O'Riordan, and Recipes

The fifth was: Tolkien Exhibition, Editing Tips, and Johnny Marr

The seventh (not a typo! the very first hodge podge post (all about Out of the Water) was unnumbered, and it was only on the seventh of the numbered posts that I picked up the correct numbering!) was: RIP Terry Jones and Hope Dellon, Hiraeth, IWSG Day, and ROW80

The eighth was also travel post No. 5! and featured Thun, Library, and Kuşadası

The ninth was: Moose and Eagles, Tolkien, ROW80, WRiTE Club, Baking and Knitting

And the tenth was: Free Books! Artists on Patreon, Knitting and Baking


What sorts of fun stuff do you collate?
What secrets are in your art?

Jemi Fraser said…
I really enjoyed Summer Fire!! Great story!
Love that you used your grandparents' names!! That will cause some smiles :)
3 June 2020 at 14:44

Deniz Bevan said…
It felt very weird, because the masking names didn't quite match the characters!
4 June 2020 at 05:48

Hilary Melton-Butcher said…
Hi Deniz - using your grandparents names for the 15th century ... while I imagined your Summer Fire was about you and your sister ...?! Congratulations on having that book published ... secrets - will remain. All the best as the summer progresses - Hilary
6 June 2020 at 07:03