long long time ago I wrote up a Writing Wrap-Up By Decade post
(which, incidentally, linked to a post in which I said I hoped to attend the Surrey International Writers' Conference -- and now I have!)...

2000: Some poetry. Some book and music reviews and essays in university newspapers. Probably some short stories. Nothing to sneeze at, unfortunately.

2002: Started my YA novel An Arnavutkoy Spring, which takes place in Istanbul c. 1910

2003: Continuing work on the first draft of An Arnavutkoy Spring

2005: These memory exercises are hard! I don't remember what-all I was writing in 2005. Maybe I was playing at translating Tolkien into Turkish. Who knows?

2006: Joined the Compuserve Books and Writers Community. (I should mention that this was a direct result of reading the Outlander series by Diana Gabaldon. Thank you, Diana!)

2007: Started MG/YA The Face of A Lion! Wrote a short story called He Ain't Heavy and submitted it to the SIWC Storyteller contest. Started this blog.

2008: I spent the year working on The Face of A Lion, writing and editing and researching. Wrote a couple of columns for Bizim Anadolu.

2009: Finished The Face of A Lion and began sending it out to agents! Started a new novel, set in 1492 (Out of the Water). Wrote a few columns and books reviews for Bizim Anadolu. Wrote two short pieces for the staff newsletter at work.

2010: Lots of editing and research for The Face of A Lion, and then in the summer, the Cherry Hill and Constantinople writers' houseparties happened. I began drafting Out of the Water in earnest. Also had a dream of a story that finally saw the light of day as my 2013 NaNoWriMo project.

2011: The year of Out of the Water -- endless drafts and editing and research and query preparation. NaNoWriMo project was Rome, Rhymes, and Risk, which I typed up later in the spring.

2012: Drafted a paranormal novella, Druid's Moon, over the summer, as well as a short story called At Summer's End. NaNoWriMo project was Captive of the Sea. Wrote a very rough draft of a short mystery that takes place in time between Out of the Water and Captive of the Sea. Reworked two very old pieces and shared some ancient writing snips on the blog.

2013: Shelved all other stories in order to edit and query Druid's Moon. Typed up Captive of the Sea. NaNoWriMo project is Alice and George's story, Larksong (the dream from 2010!). Wrote a short story called Where's There's Life, which was shortlisted for the SIWC Storyteller award. Wrote a vignette on New York City, which I hope to submit to Vine Leaves.


And here's the update for the next seven years! (Note: I don't seem to have kept track of every houseparty in the recap posts, unfortunately, nor all the writing exercises)

A historical romance set in WWI. On the eve of his departure for the front, a newly-commissioned officer discovers that the girl he was meant to propose to that night has disappeared, leaving behind only a cryptic note stating that he must at all costs not search for her. He cannot promise such a thing, of course, and from the moment he arrives at his post in Greece -- having made as many enquiries as he could by telegram while on board ship -- he begins trying to track her in earnest. The horrors of war do not -- as yet -- trouble him as much as the fears in his heart. The barest of leads sends him to Constantinople on his first furlough, where he finally runs her to ground and discovers that she is a spy for England. Yet his dedication has served not only to endanger them both, but to jeopardise her mission, and they must now choose between passion and duty, unless they can find a way to honour both

2015: October writing exercise on thelitforum. Thinking about the library catalogue, keeping up with another A to Z Blogging Challenge, the Insecure Writer's Support Group, and A Round of Words in 80 Days (these are ongoing each year). Some work on Druid's Moon and querying Out of the Water, and submitted a vignette as a Janet Reid flash fiction piece! Finished typing up the NaNo 2013 story, Larksong. participated in WRiTE Club, wrote and edited an unexpected new short story ("One to Another") and submitted it to Surrey! Started a new novel during CampNaNoWriMo (The Heathen in the Hold)! Added a few hundred more words to a joint novel I'm writing (s l o w l y) with family members (The Horror of Horhor). Wrote At Bertram's Hotel for NaNoWriMo

2016: Remembering the Kedi's Paw Badge of Honour Award! I also wrote a short piece remembering our cats, Frodo and Sam. Finished reading all 12 books in The History of Middle-earth series for the first time. Quite a few writing exercises on thelitforum, but I didn't note them individually in the wrap-up

2017: Published Summer Fire!
Started courses at the University of Edinburgh for my Master's degree! Poked around at edits and queries for four stories (The Handful of Time, Druid's Moon, The Charm of Time, Mystery at Bertram's Hotel (working title) ) but mostly focused on school

2018: Never Have I Ever houseparty! Entered handwritten edits and did some research for The Handful of Time and Mystery at Bertram’s Hotel. Wrote two new short pieces, in August, Summer Blaze, featuring Valentina and Justin, and in December, "Blackbird’s Song", a ghost story featuring George from Larksong (and Alice in his dreams; later submitted to Surrey). Also wrote A Stitch In Time during NaNoWriMo. Finally, added more story playlists on YouTube

2019: Titanic houseparty! Ask Me Anything houseparty! Making Spirits Bright (Night at the Museum 2) houseparty! April, May, and July writing exercises on thelitforum, some editing of The Handful of Time, participation in WRiTE Club! Also wrote The Antipodean Time during NaNoWriMo and reached 1200 posts on this blog! Finally, consolidated all my research lists

2020: I'll do an official wrap-up for the year in January. So far I've mostly worked on editing Captive of the Sea. And NaNoWriMo is on this month! I'm planning to write The Byzantine Time. The series is as follows:


The Charm of Time: Christianne and Rory, set in Geneva, Oxford and the isle of Lewis; romantic suspense

The Handful of Time: Christianne and Rory's sequel, set in Geneva; romantic suspense

The Stitch in Time: Amelie (Christianne's daughter) and Angus (Rory's much younger brother), set in Oxford and Edinburgh; contemporary romance

The Byzantine Time: Alexandre (Rory's son; Simon's twin) and Sevda (Austin's distant cousin on his mother's side, from Turkey), set in Geneva and Founex; murder mystery

At this point, after all of these stories have been edited, I can either query them, or self-publish them, being able to put out a book every year. But, as I say, they do need editing first.

Onward and upward for another decade!

Photo to break up the text! 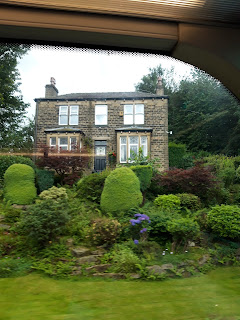 This is the childhood home of Austin Cunnick, in Holmfirth.
Star of The Face of A Lion and participant at every writer's houseparty ever held on the Compuserve Books and Writers Community and thelitforum!

What kinds of plans are you making for your writing and reading?

Hilary Melton-Butcher said…
Hi Deniz - you are always so busy, detailed in your records and fulfilling your time to the best. I'll be back to look at some of the links ... particularly the Alfred Russel Wallace pages ... take care, stay safe and all the best for the future - Hilary
11 November 2020 at 07:03

Deniz Bevan said…
Thank you, Hilary! I love having this blog as a way to corral my ideas and keep track of writing ideas, even when I don't always have time to put all my notes in order (too many emails to self, ha ha!).
12 November 2020 at 04:14

Jemi Fraser said…
I'm so impressed! What an awesome list of stories!
I have no idea what I wrote when - although the NaNo list would give me a good idea :)
12 November 2020 at 08:30

Jeff said…
It is interesting how you collected all you've written over the past two decades. I so much want to have time to write a book in my new position.