ou Get So Alone At Times That It Just Makes Sense by Charles Bukowski. 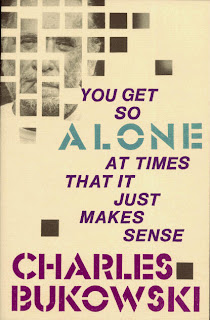 The first Bukowski I ever read were the short stories in The Most Beautiful Woman In Town ("Six Inches", "Life in a Texas Whorehouse", and more). He used to be (and maybe still is) hard to find in bookstores (though nowadays I suppose you'd just go on Amazon and click on 'add to cart'), even second hand bookstores. I guess he's one of those authors whose books are bought by true fans, who don't turn around and return the copies to the bookstore.

Also, expensive. I was 14 or so when I first read him (based on, get this, the fact that Per Gessle of Roxette read him) and having to shell out over 20$ for each book and spoken word CD was a blow to my limited funds. It was worth it, though. I realised later on (read: as the Internet became more populated) that he's a favourite with those who simply quote his more salacious work. But I don't recall those aspects making much of an impression on me when I was younger. Given my mindset at the time, I felt I understood best his blasé attitudes, his brilliant and deceptively simple way of articulating what really mattered in day to day life. To wit, The Shoelace.

I think I read him at the right time, too, because I was reading all the Dostoyevsky and Hemingway and so on I could get my hands on, so that when Buk referred to them, I knew what he was talking about. Only a few years ago, though, did I finally get around to reading John Fante.

I've tried to find a few poems of his to share with you, but back when I used to type up all my favourite poetry (there was that memorable weekend I typed out all of T. S. Eliot's Four Quartets, before returning the book to the library), I was saving things on floppy disks and hard disks, and laptops don't even have slots for them anymore. Instead, I found this: Part of a book review I did for Pulp, his last book published before his death (I was about 17 or so when I wrote this, a few years after that):


"When Bukowski died over three years ago, at the age of 74, there was a brief mention in the papers, a review of his final novel, Pulp, in the same day's edition, and then no other word ever again. This is a shame, since Bukowski is a very interesting man, and one of the most prolific writers. His writings are generally accounts of his experiences and opinions. This may seem like a boring cliche, only Bukowski's life is anything but. He touches on all levels of society in his writings, and finds something to say about them all. His fiction includes short stories about a man who was shrunk down to six inches by a witch, and an aging Adolf Hitler who replaced his brain with that of the President of the United States in order to take over the world.

One of the more unexpected places where one can find Bukowski's works is in Turkey. Yes, he has been published here - yet he is found more easily in the stalls of street vendors than in the major bookstores. Although the bigger chains do carry him, they do not smile in acknowledgment when you rush to the counter to purchase a copy. Turkish stall vendors, on the other hand, who stand so close to the books that they are eyeing your every glance at every title, will grin as you hover over Bukowski, and look at you warmly as you hold out your cash. The greatest advantage to purchasing a translated Bukowski rather than in his original English, is the price. Compared to the extremely high prices of Chapters bookstore in downtown Montreal, the translated copies on the streets in Turkey are significantly lower. His books may also be purchased over the internet from the States. No matter where one may purchase a Bukowski book, it is definitely worth its price. There are none of his books in the second hand stores in Montreal, which shows that he is definitely a writer worth hanging on to."

"Somebody at one of these places asked me: 'what do you do? How do you write, create?' You don't, I told them. You don't try. That's very important: not to try, either for Cadillacs, creation or immortality. You wait, and if nothing happens, you wait some more. It's like a bug high on the wall. You wait for it to come to you. When it gets close enough you reach out, slap out and kill it. Or if you like its looks, you make a pet out of it." -- Bukowski

mooderino said…
An excellent post. I think you capture him well, the guy who never wanted to join the in crowd (not unless they were serving free booze). Wish there were some conemporary writers in his mould.