Showing posts from August, 2009
Show All

- August 31, 2009
We spent two nights in New York City during our road trip. I’d been hoping to stay at the Algonquin Hotel , that haven for writers from the 1920s on, who met as part of the Algonquin Round Table , which also features a resident cat named Matilda. The Algonquin also offers a Writer’s Block special, offering 25 per cent off their best rate if you present a work in progress or a published work. Unfortunately, we were told that this rate was for prior reservations only, and not offered on the spot, though we both showed up with manuscripts in hand. We ended up at the Clarion Park Avenue . This hotel may not have as storied a history, boast a pet or offer the chance to meet other writers. What it did do for me, however, was provide an intense bout of inspiration. I woke up the next morning directly out of a dream of a brand new murder mystery, a story whose bare bones were all laid out for me – all I had to do was take notes. The only catch is that the detective in the story is Hercu
Post a Comment
Read more

Help! Can You Identify This Item? 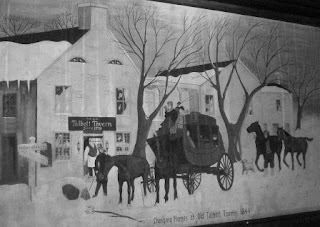 A number of posts and photographs on our travels, as well as a post on "Writer's Block, Algonquin Hotel, NYC" will come soon. For now, though, I and the good people at the Talbott Tavern, Bardstown, Kentucky, need your help. What is this thing?
7 comments
Read more

- August 20, 2009
More songs added, here ! And an Australian take on The Hobbit , here . Meanwhile, I'd like to post a clip of Homer Simpson in New York City, as part of my travel series (details to come!), but the copyright restrictions seem to be strictly enforced. Here 's a description.
Post a Comment
Read more

Singing Springsteen's A Good Man Is Hard to Find

- August 20, 2009
"It's cloudy out in Pittsburgh It's raining in Saigon Snow's fallin' all across the Michigan line Well she sits by the lights of the Christmas tree With the radio softly on Thinkin' how a good man is so hard to find..." I was going to put up a page for Country Roads Take Me Home (about West Virginia) but we're just driving through.
Post a Comment
Read more

- August 10, 2009
We've been having another house party over on the writer's forum, this one hosted by Jill in New Zealand. Mischief and mayhem abound!
Post a Comment
Read more 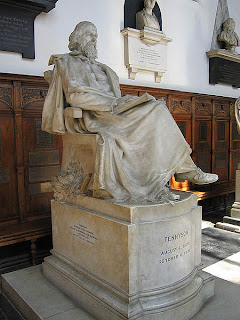 "Tears, idle tears, I know not what they mean, Tears from the depth of some divine despair Rise in the heart, and gather to the eyes, In looking on the happy Autumn-fields, And thinking of the days that are no more." Today is the 200th anniversary of the birth of erstwhile Poet Laureate of England, Alfred, Lord Tennyson, a position to which he succeeded upon the death of William Wordsworth. Tennyson was Poet Laureate nearly as long as Victoria was Queen. One of his most famous poems is The Charge of the Light Brigade , a tribute to the British cavalrymen involved in a charge at the Battle of Balaclava, during the Crimean War (1850s). Here is the last stanza: "When can their glory fade? O the wild charge they made! All the world wondered. Honor the charge they made, Honor the Light Brigade, Noble six hundred." Others of his poems drew inspiration from the tales of King Arthur, or from even older sagas , though I believe Tolkien's recreations of Norse
Post a Comment
Read more