Showing posts from May, 2009
Show All

2009 Marks the 50th Anniversary of the Saint Lawrence Seaway II 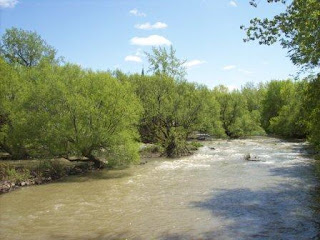 Saint Louis Falls... The river: ...and the falls: I tried uploading a video of the falls, but after an hour and a half, Blogger was "still working" so I've given up. It's only 5MB, fer cryin' out loud!
Post a comment
Read more

2009 Marks the 50th Anniversary of the Saint Lawrence Seaway I 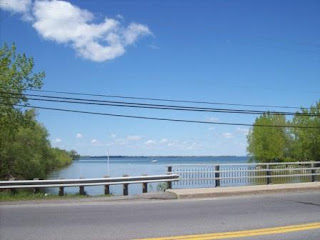 View of the Saint Lawrence River near Beauharnois, Quebec: A closeup (sort of) of the island of Montreal, across the river: A hovercraft!: Saint Clement Church, 1843: Why is there an owl next to the statue on the left?
2 comments
Read more

- May 19, 2009
This post is my reply to Susan's questions : "What kind of research have you found yourself doing? What weird worlds have you explored?" I agree with her that research is lots of fun, since you get to discover new facts and perspectives, learn about whole areas of vegetable/animal/mineral life and history, and uncover weird and wonderful new words. Some of the (odder) topics I've researched in the course of writing: Rituals of the Temple of Artemis The Reconquista Sea levels in Turkey over the past 2000 years Was Columbus Scottish? Musical groups in Montreal in the 1930s Pub names in ancient Rome Greeks and Armenians in Arnavutkoy, Istanbul c. 1910 How long it takes to drive from Halmstad to Stockholm Riddles of the Greeks and Romans The Spanish Inquisition Hotels on Capri Ottoman life and courtly customs in the 19th century How about you?
3 comments
Read more

- May 19, 2009
I discovered Anne and May 's blog through Nathan Bransford (also check out his link to the 24-hour air travel satellite video on YouTube), and learned that my sister and I are not the only ones that create cruise ships on sofas! (Discovering a new author blog that I like is veery dangerous, since it adds to my Wishlist/To Be Read pile. The only trouble is reading the comments on the various posts; there're a lot of people out there for whom logical fallacy is a way of life. Back to the cruise ships...) In creating the HMS Sofa, you collect all the items you will need for an afternoon's sail (a cat or two, your favorite drink, some knitting, a huge stack of books, puzzles and magazines, etc.) and veg for a few hours. No getting up! except to replenish your drink or maybe catch an errant ball of wool before the cat does. I've been doing a lot of this lately. Although I have officially started the new WIP, I haven't gotten anywhere on query revision for the comple
Post a comment
Read more

- May 09, 2009
Here's a London day that inspired this post. If I had my way, I'd be writing about a perfect Istanbul day, or a day somewhere in Scotland and Wales. But Montreal will do in a pinch :-) 9 am Rise with the sunshine coming in the window. Shower. A table has been miraculously laid with almond croissants, eclairs, a steaming pot of coffee and a latte in a bowl, maple syrup, buttered toast and egg and cheese sandwich (all bread and pastries from Première Moisson ), and at least four newspapers, the Montreal Gazette , the New York Times and some English ones. Monday or Tuesday (see below) would be nice for this, cos I could have the Saturday Gazette and the Sunday New York Times. 12 pm All those newspapers and magazines and crossword puzzles, not to mention the coffee, would take a while. Noontime is a nice time for a walk, either in the neighbourhood or, better still, up on the mountain (which Oscar Wilde once called a "hill", rousing the ire of Montrealers of the time
1 comment
Read more

Two Contests for which I'm Putting Material Together

- May 08, 2009
The Katherine Paterson Prize The Bloom Award I'd like to submit by the end of next week, if I can pull my eyes away from Stephanie Plum 's adventures...
Post a comment
Read more

- May 01, 2009
Those I've read to date (so much more on the wishlist!) that I would recommend: Cost of Freedom by Carol Spradling Acadian Star by Hélène Boudreau all of Diana Gabaldon 's works Prisoners in the Promised Land by Marsha Forchuk Skrypuch Hindsight by Barbara Rogan Have I forgotten anyone? Come check 'em out on the Books and Writers Forum ! Eeyipe! Thanks Claire! Post edited to add two very important books: The Spymaster's Lady and My Lord and Spymaster by Joanna Bourne .
4 comments
Read more
More posts