Showing posts from December, 2008
Show All

And now... I've got to tackle the electronic MS, entering all those edits, fixing dialogue, typing up linking bits... oh, and, um, writing the last couple of pages.

6 pages per day - I should be able to do this, but if willpower fails, there's always the Mission girls!

The goal is to finish by 1 February, since I've got about 10 beta readers lined up! I gave the first chapter to friends and family back in August - the chapter's changed since then, thankfully, since I got no feedback whatsoever... Non-writers!
Post a Comment
Read more

And Now Back To Our Regularly Scheduled Programme

- December 25, 2008
Three days and eighteen pages left to go on the editing, and I'm getting a little discouraged... Seems I really ran out of steam in the last few chapters - lots of loose ends to tie up and dialogue to fix and description to add.
I love Austin and Kedi and their story but I wish... I'm not sure. Time alone with a computer? More hours in the day?
Whatever it is, though, I'd like to figure it out before the new year (remember the Charlie Brown when Lucy enters Linus in the New Year pageant? and Linus gets all stressed? I tried to find a link of some sort but Google didn't turn anything up this time...) comes in - and then institute a regimen of some sort (sorry, had to use that word - just caught someone trying to use it but saying regiment instead, without understanding the difference) and then stick to it.
Sven is still going strong, so he might provide some incentive...
2 comments
Read more

That's What Christmas Is All About, Charlie Brown

- December 22, 2008
Blogs and mailing lists I follow are all into the Bookworm Meme (find the nearest book, open it to page 56, and read the 5th sentence (why page 56?)).
*looks around*
Ha! The day I finally decide to play I'm at the office with no books and I don't even have my commuting book with me cos I'm editing my own novel on the train... Here you go...

From The Face of A Lion (the fifth sentence is kinda short. Therefore I'm just going to give you the whole of page 56):

"But why me?"
"All those who are chosen for such tasks ask that very same question. It is a mark of your humility that you should wonder at your own capabilities." Kedi's whiskers still tickled his knee. "The presence of such humility, couple with a dedication to the task before you, is precisely why you are suited so completely to this undertaking. Parua scintilla saepe magnam flamum excitat - a small spark often ignites a great flame."
Kedi's words swam in his head. As far as he co…
1 comment
Read more

- December 21, 2008
Forgot two more!
Sweet and Savoury Bites - an Australian baking book - and Tartans, both birthday presents :-)
Now I can make lamingtons! Thanks Sim! If you had a blog I could tag you...
Post a Comment
Read more

Of course, none of the statistics below take into account any of the beta reading I've done, of my own novel or others' novels... Not to mention Letters from Home, monthly exercises, and so on, over at the Compuserve Books and Writers Forum, the best writers' hangout on the web!
Post a Comment
Read more

- December 20, 2008
Addendum:
Two books that are missing from the list:
Britannia Mews by Margery Sharp
and
Cost of Freedom by Carol Spradling
I don't know what happened to Britannia Mews; I read it back in August, so must have forgotten to add it to the list... Cost of Freedom I just started!
So that makes 104 books over 50 weeks if I finish the Pink Fairy Book this weekend...
Post a Comment
Read more

Average over 50 weeks: about 2 books per week

Most by one author: apparently it's the Alex Rider series at 5 books; next come Emily Carr and Dorothy Sayers at 4 books each

Caveat: I would have read more by Joanna Bourne and Marilynne Robinson but they've only published 2 and 3 to date, respectively

Newest book: well, many of them are reprints so it's hard to tell... Actually, it must be Joanna Bourne and Marilynne Robinson's latest, since they were released this year and I bought them straight a…
Post a Comment
Read more

The Tales of Beedle the Bard by JK Rowling (lovely!)
Hundreds and Thousands by Emily Carr (lovely; lots of good advice on creativity, among other tidbits; yesterday was the 137th anniversary of Emily Carr's birth; I wish I could have been her friend))
Ask the Dust by John Fante (Has anyone else read this? What'd y'all think? It wasn't as much fun as Full of Life)
StitchnBitch Nation (Birthday Gift from Helen! Sooo many patterns to choose from!)
Hindsight by Barbara Rogan (read it! read it!) (http://www.barbararogan.com/)
Stories by John Buchan (the Folio edition; our erstwhile Governor General!)
Travels with Charley in Search of America by John Steinbeck (still very relevant!)
First Folio (collection of forewords from 15 Folio Society books)
This Way for the Gas, Ladies and Gentlemen by Tadeusz Borowski (short story; very affecting)
Borders by Thomas King …
2 comments
Read more

- December 20, 2008
Here are the books I probably won't finish before the new year:
Life by Richard Fortey (a history of the first 4 billion years of life on Earth)
The Pink Fairy Book by Andrew Lang
The Agape Flower by Ilyas Halil (translation from Turkish)
Altin Yaldizli Adam by... I forgot
Der Ruf der Trommel (Drums of Autumn) by Diana Gabaldon (reading at intervals)
Yabanci (Outlander in Turkish) by Diana Gabaldon (ditto)
The Ode Less Travelled by Stephen Fry (ditto)
Paradise Lost by John Milton (ditto)
The Divine Comedy: Hell by Dante translated by Dorothy Sayers (ditto)

I might finish The Pink Fairy Book, but the others, especially the Turkish ones, there's no chance. I haven't touched 'em in weeks!
Post a Comment
Read more

Well That Was Depressing... 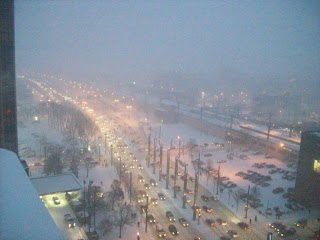 I can't believe I have to rewrite my opening. Meanwhile, here are some photos of the weather we've been having:

The view from work, last week:

Walking to the train station the next morning:

At the train station:

Trees at the train station:

A couple of days later I was on this street:

And I saw some late geese!:

As well as a frozen magnolia:

- December 15, 2008
Nathan's chosen his winner in the paragraph contest, and commented on three trends he's seen in the 1300+ submissions. Check out pattern two:

"2) Small, finely rendered observation. This is followed by the particular shape of the moon or the wisps of grass and the particular temperature that still night or perfect sunset that lulls us into a sense of place and setting. And then we linger in that scene still longer to see one more even more finely rendered detail, and still another, leading us to the very thing the author seeks. That is, until the shocking statement."

That's me all over.
Well, guess that means I'll be completely revising my opening...
Post a Comment
Read more

The 53rd Salon des metiers d'art du Quebec is going on right now across the street from where I work, featuring all sorts of handmade candles, soaps, leather goods, clothing, woodwork and so on. Usually there are at least two or three booths selling handknit products; one such booth this year was also selling their own wool. Of course I bought some :-)

The wool comes from the sheep on the Icelaine farm, south of Trois-Rivieres, in a part of Quebec that features a large number of interesting saints' names:

The sheep are all named:

I would love to visit this farm someday. The closest I got was the two skeins of white and two skeins of brown-black wool I purchased. The latter two became this scarf, which I finished over the weekend:

Close up of basket weave:

Austin met the cat during his first week in Kuşadası.
Bored with helping his parents clean their villa, he set out to explore the town. Every few minutes he had to climb onto the stone wall edging the street – there were never any sidewalks in this country – when a car or bus full of tourists whizzed past on the narrow road, a stench of diesel fumes floating behind. He peered through the exhaust and added up the houses he had passed. His mum had said there were forty houses in the original village. Something had to be wrong somewhere, because he’d counted every house for the past ten blocks and already reached sixty, and there were still a few streets before he reached the ice cream shop –
An unearthly howl filled the air, drowning out the disappearing rumble of the car. It came again, close at hand, and Austin ran to the crossroads.
1 comment
Read more

- December 09, 2008
That's me! Right after the paragraph about a kill and right before another YA...
Nathan Bransford, blogging agent extraordinaire is hosting his 2nd Sort-of-Annual Stupendously Ultimate First Paragraph Challenge and the deadline is tomorrow - enter while you can!
5 comments
Read more

- December 03, 2008
I haven't done much real work on the novel in the past couple of months. I've been watching Jenny's progress as she ploughs through revisions on her way to the Golden Heart submission deadline - yay Jenny! for finishing. But I've been caught up with other projects, such as knitting, and general laziness, and the weight of guilt was beginning to make my shoulders sag.

So when Rachel announced over on the Forum that this month's goals should be "specific [and] measurable" I jumped at the chance to finally get my fingers in gear.

I announced that I would calculate a specific number of pages to edit per day. The Face of A Lion currently stands at 200 pages (in my own quirky formatting (proper page margins, but Arial size 10 instead of TNR size 12)).

That's it! I can do that! No matter how lazy I am!

And I proved it to myself too - sat down and red-penned my way through 12 pages last night. Which means I can take New Year's Eve …
Post a Comment
Read more

Got this from Nina:

You Are a Gingerbread House


A little spicy and a little sweet, anyone would like to be lost in the woods with you.

2. Real tree or artificial? Real, but we haven't gotten once since that first year, because of Frodo and Sam and the whole still-cleaning-pine-needles-in-June thing...

4. When do you take the tree down? – Hmm, after Twelfth Night, I suppose

5. What do you do with your tree after you take it down? See, here's the thing, I'm not sure I support all this cutting down of trees stuff anyway...

6. Favorite gift received as a child? Carol got an Etch-A-Sketch! Mine was probably Lego

7. Hardest person to buy for? Nieces and nephews - they already have everything and they're too young to read

8. Easiest person to buy for? My sister - always so many options!

9. Do you have a nativity scene? A small carved one

10. Mail or email Christmas cards? Both - so many people overseas!