Songs of Summer Blogfest, Books I'm Reading, and Round Three of ROW80

ime for another round of A Round of Words in 80 Days!

I'm going to carry over my main goal from the last round, which was to take part in the June exercise over on the Compuserve Books and Writers Community.

Speaking of which, one long-standing forumite and one forumite who hasn't been around in a few years got together on Twitter the other day: 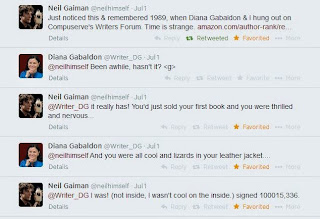 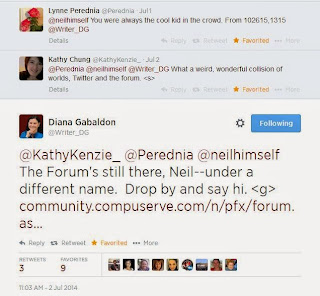 For my other goals, I'm going to include items that have to be done, in the hopes that they will get done:

1. Transcribe the latest batch of Alfred Russel Wallace letters
2. Finish knitting a baby blanket and start a new project, a gift for a friend
3. Read!

I'm in the middle of four books at the moment:

1. My Dancing Bear by Helene de Klerk, a biography of Reg Smythe, the creator of Andy Capp
2. Beowulf: A Translation and Commentary by J. R. R. Tolkien
3. The Silkworm by Robert Galbraith
4. Parade's End by Ford Maddox Ford

Has anyone read Parade's End (or each of the four novels that it's comprised of)? I'd really like to discuss and learn about some of the nuances of the British class system that I think are going over my head.

I have to finish these because I just added another four books to my wishlist today:

1. How To Build A Girl by Caitlin Moran
2. Rosie's Rescue by Raisa Stone
3. two short stories, "Zoo" and "Door Jamb" by Anthony Martignetti
4. American Interior: The quixotic journey of John Evans, his search for a lost tribe and how, fuelled by fantasy and (possibly) booze, he accidentally annexed a third of North America by Gruff Rhys (of the Super Furry Animals)

Not to mention all the books I keep adding to my Kindle app...


11 July is the Songs of Summer Blogfest! 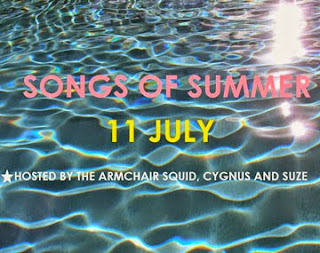 Post your top five favorite summer songs – and explain why they're you're favourites.

Here are mine (three songs and two albums):

The Pop Singer's Fear of the Pollen Count, by The Divine Comedy

It's about summer!
What more could you ask for?
"I'm in love with the summertime..."

Romance by the sea...

You Held the World In Your Arms, by Idlewild

You know how sometimes you hear a song and you have no idea what it is or who sings it but you must find out? This happened to me over a decade ago with this band, with this song.
And it was summertime!

The album Gülümse, by Sezen Aksu
The first song on this album was a huge hit in Turkey many summers ago, and Sezen Aksu herself is one of the grande dames of Turkish pop music. My sister and I had this album on tape and listened to it endlessly.

This is the playlist I created for the Help! album to benefit War Child.
It's a good sample of some of the bands I loved during the 90s and reminds me of all the times I spent listening to their albums during summer vacations (well, all year round, really), as well as all the friends I made thanks to these bands and their music.

Crystal Collier said…
And here's where I admit my computer's sound system is stowed for the next couple months until we're moved into our new place. Sad, sad day. *sigh* Regardless, way to go with your goals!
9 July 2014 at 15:52

M Pax said…
Interesting list of books. I jotted a few titles down. :)

Neurotic Workaholic said…
Posts like yours inspire me to read more fiction; I've been reading scholarly nonfiction books for my dissertation, which are not much fun to read. And how did we ever live without Youtube? It's great that we can watch pretty much anything on there.
10 July 2014 at 23:46

Hilary Melton-Butcher said…
Hi Deniz - your music selection is interesting for one totally or nearly music illiterate - I'll be back, when I'm not in go go mode to get lots done today ...

However of course I had to check out Parade's End, by Ford Madox Ford ... again being relatively illiterate I've recently bought "How to be well read" A Guide to 500 great novels - by John Sutherland ... I see Madox Ford was an author with a German birth name ... (Ford Hermann Hueffer)- changed probably due to the Germany reference after WW1.

The longish 'summary' states - he hopes that the national commemorations of 2014 - 1018 in GB will help recruit the new readers Ford's majestic, and troubling, novelistic sequence richly deserves.

So he has a fan there .. I do know a bit about the class system, but haven't read the book.

Maurice Mitchell said…
Turkish pop music is going to be my new thing Deniz. Thanks for adding a multi-cultural feel to the bloghop!
11 July 2014 at 11:48

StratPlayerCJF said…
Wow, cool summer song mix, Deniz! I have to admit that the only one I'm familiar with is Oasis, and after listening, it's the one I like the least. :)

The one I liked the most? Sezen Aksu! Very, very cool! I love the mix of Eastern, Western, and Arabian influences. Maybe it helps that I have no idea what she's singing about, so my mind assumes it must be deep and epic. ;)

Nicki Elson said…
Oh my gosh -- I've never heard of any of the songs on your list, but I LOVE them! This is easily my favorite list of the fest (I like it even better than my own). The only one I don't care for is the Sezen one...er, sorry Chris, but the other 4 are awesome enough to make up for that. Well done and thanks for the new tunage!
11 July 2014 at 14:04

Cherdo said…
Other than Oasis, these were all new to me - which I LOVE.

Thanks for the great list. I need to expand my musical horizons, apparently.

Toi Thomas said…
This is a new experince for me. I've never heard any of these songs before. Thanks for sharing them and expanding my horizons.
11 July 2014 at 14:49

Stephanie Faris said…
So funny--my husband just asked, "Whatever happened to Oasis?" I said, "All fame is temporary." He pointed out that Oasis was touted as the "next Beatles" when they first started and I pointed out so was Duran Duran and One Direction. There have been a lot of awesome bands--but there's only one Beatles because they were pioneers.
11 July 2014 at 22:19

Susan Flett Swiderski said…
Boy, thanks to this bloghop, I sure am getting to listen to a lot of new-to-me songs. I especially like your first choice here. Thanks so much for sharing.
15 July 2014 at 15:23

Anonymous said…
Hi Deniz! Thanks for visiting my site! I have to admit that these songs were all new to me except Oasis...but I really do like "You held the world in your arms." So thanks for introducing me to it! Very summer-y list :-)

Trisha said…
I didn't know 3 of these artists - but do know Oasis and Idlewild (the latter only just - but I listened to more of that album and now I want to buy it, so yay!). ;)