ottermore! I can't wait to find out what it is.

1. Did you know that we have a piece of the Berlin Wall here in Montreal? 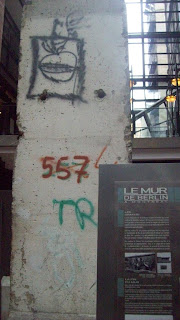 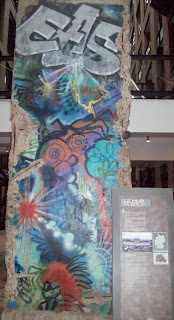 2. A couple of weeks ago I went to the McGill University library exhibit on nursery rhymes, fairy tales and fables. 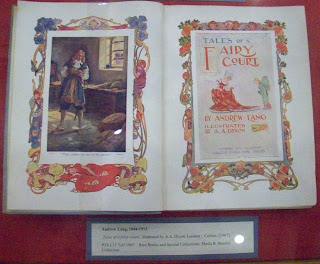 An historical description of the cat appended to an edition of Cinderella: 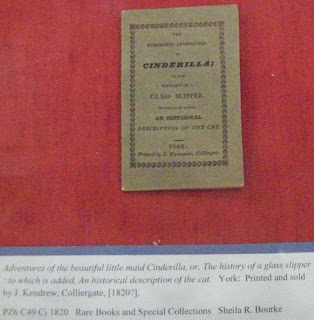 3. Susan at All The World's Our Page has written a beautiful metaphor on glass beaches and writers. It made me feel like grabbing pen and paper and letting words wash over me in ceaseless waves. I love language!

4. The other day, Zan Marie had tea with her inner critic, and recorded their conversation. Watch out for the reference to Old Wilmington's Lord John Grey! I'm having a cup right now.

5. I've been a Tolkien fan for so very long that I thought I'd seen it all, whether his writing or art, photos or videos of interviews, what-have-you.

Then, suddenly, thanks to Glynis Smy, who linked to the British Library Archival Sound Recordings, I started exploring the site and found a host of fun stuff, including an interview with a World War I veteran, interviews with pre-World War II farmers (on haymaking, dry stone walls and marking sheep, and a year in a sheep farmer's life, from shearing and dipping to mating and lambing) and two conversations with Tolkien!

They're not actual conversations, though, but scripted pieces for a Linguaphone series on English Conversation. Tolkien is featured in Part 20: At the Tobacconist's, and Part 30: Wireless. Replace the word "wireless" with "iPad" as you listen to the latter, and it sounds remarkably modern.

Here's The Professor himself... 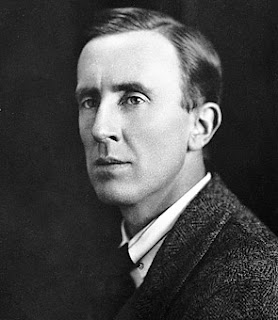 J.L. Campbell said…
Interesting stuff. They're still giving away bits of the Berlin Wall. I think they gave one of our athletes a bit of it a little while back.
17 June 2011 at 21:33

Beth said…
I'm counting down the days to Pottermore too. And I'm on my way to check out the metaphor on glass beaches and writers!
18 June 2011 at 05:46

Talli Roland said…
Where is that piece of the Berlin Wall, Deniz? I had no idea?

Deniz Bevan said…
Thanks for coming by, beth!

Not sure Aubrie - there was a poem and all sorts of info on the placard but I don't seem to have taken a photo of that part - only the part detailing the history of the wall.

Bryan Russell said…
I'm totally going to have to check out those Tolkien sound recordings.
19 June 2011 at 12:21

Jill W. said…
The town I went to high school in had a piece of the Berlin wall, too, on the university campus. I really ought to go take pictures of it next time I'm around town.

I've no idea what's up with Pottermore, but I really want to see the new movie!

Brooke Rousseau said…
I didn't know a piece of the Berlin Wall is in Montreal. My family is going to Montreal in a couple of weeks, we'll have to look for it.
21 June 2011 at 09:55

Margo Berendsen said…
Curious about Pottermore too! I've been meaning to visit your blog for a while - the Tolkienish title intrigued and now also keen to see you have written historical fantasy too (I'm working on one right now).

Deniz Bevan said…
Did you, Bryan? Weren't they fun to listen to!

Neat, Jill. I wonder how many bits are scattered all over?

Hope your family has a great time in Montreal, Brooke! Are they coming for the Jazz Festival?