I was all set to do a post on my knitting blog about the latest Lilian Jackson Braun book I've finished - The Cat Who Saw Stars - since it features an older Scottish gentleman in full regalia piping at the head of a parade that includes Qwilleran's oldest friend knitting a sock with four needles on the Friends of Wool float; and this coming Saturday is World Wide Knit in Public Day. But.

Found out this afternoon that Ms. Braun passed away last Saturday, at the age of 97, two weeks shy of her 98th birthday (condolences may be sent to the family here).

What's that you say? Never read a Cat Who... book? Well, I hadn't either, until I started writing my middle grade a few years ago. Every time I told someone there was a talking cat in it, they asked me if I'd read the Cat Who... books. So I finally picked up a couple at a second-hand bookstore. Well, Koko and Yum Yum are nothing like my Kedi - obviously those people had never read the books. If they had, they'd have been recommending them to me on their merits alone.

The Cat Who... series is part mystery, part social commentary, part ode to cats, part tribute to small town Northern America. There's a little bit of everything, in fact, and Qwilleran himself, the main journalist-crime solver-author-man about town is just the sort of well-rounded character you'd hope to meet someday. He'd sure treat you to a nice dinner out, at least.

Ah, heck. I'm not doing the flavour of the books justice at all. Why don't you start at the beginning, with The Cat Who Could Read Backwards. Margot Kinberg had a post on The Cat Who Could Read Backwards a few months ago, which described it all a bit better. Also, Clarissa Draper included Lilian Jackson Braun in her list of 5 Most Influential American Woman Mystery Writers.

Here's the lady herself: 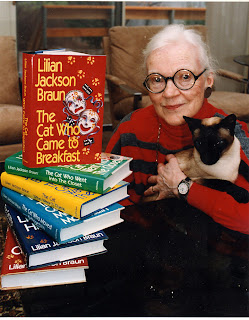 Ah yes, the knitting. But first, Christopher Smart, the 18th Century poet. Qwilleran quotes a few fragments in The Cat Who Saw Stars, on the subject of cats in general, and of Smart's cat Jeoffry, from Jubilate Agno:

"For he counteracts the Devil, who is death, by brisking about the life.

For in his morning orisons he loves the sun and the sun loves him.

For he is of the tribe of Tiger.

For the sound of a cat is in the most useful preposition κατ' ευχην.

For the pleasantry of a cat at pranks is in the language ten thousand times over.

For the purring of a Cat is his τρυζει."

If anyone knows what the Greek words are, please tell me!

As for knitting... I've gone back to work on a scallop-edged blanket, but I seem to have lost the pattern since I last worked on this project. That's okay; all my spare moments are taken up with editing. A Round of Words in 80 Days: The past few days I've been drafting like mad, finishing up scenes that were missing. For a fourth draft, I seem to have quite a lot of blanks remaining!

scribbleandedit.blogspot.co.uk said…
Oh wow I like the sound of those Cat who novels.
Good luck with your edits :O)
8 June 2011 at 08:56

J.L. Campbell said…
Sounds like you're plenty busy. Ya know, I have one of those books. Not sure which it is, but The Cat Who...and the picture of the cover jogged my memory. I should look for it and read it sometime. Where does one find time to read all the books in one's possession? And there's the matter that booklovers never stop buying. Oy!
8 June 2011 at 09:25

Anonymous said…
Deniz: I just read your comment over at my 1st Author Interview. Thank you for your support!

And that got me here, thank goodness. You say Ms. Braun died at 97. That's when my own mother died, and with her genes I'm expecting to live that long. And I was going to post, soon, about Harry Bernstein who died at 101 and published his first memoir at 98! Lately I've been saying I'm too old to do all this--at 71. Reading about Bernstein and now Braun, I'm going to stop thinking this way!! Thanks for introducing me to her! I am now going to find some copies of her books--they'll probably turn up through Amazon's used book sellers. I can't stand to miss her. Wish I could read the Greek, but I can't!

And knitting: I took it up for a while when my first two girls were little and I had no time to read and write. Didn't last long. I often think about doing it when I'm watching a movie, but I don't seem to have time for that lately with book promotion, and trying to write. You know how it is: revising takes TIME.

I'm transferring to a WordPress blog, which is now up, I just have to get some content on it--but I'm not going to quit Blogger unless it crashes. A friend I hired to help me set it up got a thingy on my Blogger that directs traffic to it. If you click my signature here it'll take you there.

Enjoy knitting, and revising. I think revising is more fun than getting down that first draft.
Ann Best, Memoir Author
8 June 2011 at 09:57

Nas said…
The Cat books sound like fun, and She sems to have a long productive life, thanks for sharing about her, Deniz!

Michelle Stockard Miller said…
I have several of her The Cat Who books, but have never read them...and me such a cat lover! Sad to hear that she passed. She did live a very long life. May she rest in peace.

Beth said…
I should check out those books, as I love mysteries. Especially old-fashioned mysteries, like these. Nice tribute to an author!
9 June 2011 at 15:00

κατ' ευχην, means 'in prayer'
τρυζει, this can't be directly translated, but it's kinda like a 'tiratiratira' noise :o) Basically he's saying here that he adopts the sound of the cat's purr.
10 June 2011 at 02:13

Thank you Liz and Madeleine!

It's very sad Linda - I sort of wish she'd had a chance to wrap up the story at least.

Deniz Bevan said…
I hope eventually I'll own and read all the Cat Whos, Ann!

Oh yes, revising takes lots of time. I'm afraid my own knitting has fallen by the wayside - except when watching a movie. That's the perfect time!

I've linked to your WordPress blog as well.

Deniz Bevan said…
Thanks lauralyn! I never feel like I'm accomplishing anything...

You guys should check 'em out, Sara, Julie, Nas and Michelle - very fun books with lots of great characters.

Thanks Beth and Susan!