End of Another ROW80 Round, Kedi's Paw Award, Stephen King, and LOTS of Blogger Love Links

ere we are at the end of another round of A Round of Words in 80 Days. I did really well - at least, working steadily - until last week. Then I got derailed by kilt hose.

With one chapter left to go, I'm going to jump into the next round, and promise to finish editing Rome, Rhymes and Risk, and query a few more agents off my list, for Out of the Water.

But I've been neglecting the blogs. So I thought, in case I can't make it to all the commenters on my last handful of posts, I'd give all of you an award! Presented by Kedi! (And I'll leave this post up through Sunday, and skip a Friday post for once.)

Kedi is a... spirit who currently happens to be in cat form. Only those with whom he is in direct contact realise that he's more than just an ordinary cat - currently he lets his guard down only around Austin, the English boy he's befriended in my middle grade novel The Face of A Lion.

As a cat, he's a soft grey colour with a white underside and paws, and very long whiskers. He makes chirping noises and purrs very loudly; to Austin and others who understand him, this sounds to them like English or whichever language it is they speak.

Here he is, passing on his Badge of Honour to you: 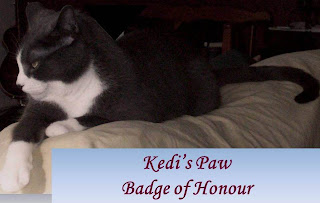 Please feel free to pass on the Paw!
And now, some of the links I'm meaning to follow as I get back into blogging:

Here's my latest review, of Alyson Reuben's A Beautiful Cage, on One Hundred Romances. And there are new reviews over at Romance Book Haven!

A snip from Siv Maria's story as part of the Lucky 7 meme.

The Daring Novelist types up old stories over at Daring Adventure Stories. What an amazing idea! Here's the latest, a story called Girl From Nowhere, from 1915.

Medeia Sharif was also tagged on the lucky 7!

Carol Riggs has got a great post on the effect your story has on readers.

Sara's recent post talks about the main character dilemma. What do you do when you like a book but dislike so much of the character?

The Eagle talks about home schooling and features a Turkish March.

The Capillary's doing a 21 day challenge!

Robin McCormack has a friend for Kedi!

I just read some wonderful truths by Stephen King about revision:


"My approach to revision hasn't changed much over the years. I know there are writers who do it as they go along, but my method of attack has always been to plunge in and go as fast as I can, keeping the edge of my narrative blade as sharp as possible by constant use, and trying to outrun the novelist's most insidious enemy, which is doubt. Looking back prompts too many questions: How believable are my characters? How interesting is my story? How good is this, really? Will anyone care? Do I care myself?.

When my first draft of a novel is done, I put it away, warts and all, to mellow. Some period of time later - six months, a year, two years, it doesn't really matter - I can come back to it with a cooler (but still loving) eye, and begin the task of revising."

Nadja's got exciting news for the end of ROW80.

Candy tells us what writers can learn from soap operas.

The Science of Romance has a Lucky Leprechaun giveaway that ends tomorrow!

Naina Gupta's given a new interview.

...and Ali Dent talks about being overwhelmed sometimes. And KM Huber talks about silence.

Lauralynn Eliott has reached the end of ROW80, too.

Tia Bach talks about loving to write for teenagers.

Carolyn's got a post on tips she picked up at a writers' event - Publicity for Authors.

Suzanne's got tips too, on specificity.

Michael ...In Time... looks back on over a year of blogging!

Outlander Kitchen now has an index!

Julie Glover's got a great meme about reading habits.

And Marcia Richards' had a recent linky post too, featuring great stuff, including an interview of Diana Gabaldon by Authors Road, and writing tips from Steinbeck.

Finally, big congratulations to Theresa Milstein and Roland Yeomans and Connie Keller for reaching the quarter finals of ABNA!

Unknown said…
Thanks for the shout out :)

That's some pretty solid advice from old Kingy there. Leaving it to 'ferment' for a few months before revision begins is a good idea.
22 March 2012 at 02:24

Nadja Notariani said…
Thanks so much for the shout-out, Deniz!
Because of your video link to Blackadder, which prompted me to share - a new fan of the British comedy has been born - my 15 year old son! He's liked R. Atkinson in other movies, but has only just appreciated Blackadder. Ha!

Anonymous said…
I love the Stephen King advice, particularly this part: "...trying to outrun the novelist's most insidious enemy, which is doubt." So true!
23 March 2012 at 05:32

Arlee Bird said…
Wow! That's a lot of links!
I love Stephen King's advice. I just wish once I could actually do it that way.

Deniz Bevan said…
Thanks for coming by, Jamie and Matthew!

Hope you guys find some interesting stories in these links, Sara and Vicki!

I'm always afraid, LR and Liz, that I'll come back and find the story sucks...

Donna Amis Davis said…
What a great set of mash-ups, Deniz! You are one busy blog-reader, out there curating for all of us. Thanks.

Glynis Peters said…
Loved your posts. Knitting a Kilt Hose? Wow, you have many talents!

Carol Riggs said…
Hey! I didn't expect to find my link here! You're a sweetie. :D I enjoyed your Lucky 7 excerpt too (neat name, Ayten). Had to laugh about the not needing her wrist to walk. Haha, oh wow, I tagged Medeia too. Well, she's popular I guess!
27 March 2012 at 10:09