The Saga of the Kilt Hose

- March 30, 2012
[Cross posted from my knitting blog.
A-Z Challenge and the next round of ROW80 start this week. Look for me on Nutschell's blog on 4 April!]

ilt hose. Long stockings worn as part of full Highland regalia. Kilts, at least, have been around for hundreds of years. 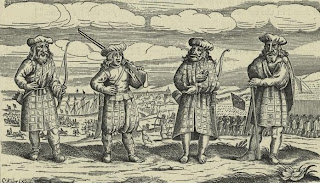 Apparently, this is one of the earliest depictions of kilts, a German print showing Highlanders, from c. 1630.

Back in 2008, I was saying things like 'If I ever knit a sock...' Round about then, Helen and I started knitting at lunchtimes. I made a knitter's crossword! Yet when I referred to socks (and there's also one typo), I only mentioned double pointed needles.

I started my first pair of socks in September 2009, and it was on double pointed needles. It only took one sock for me to become discouraged. As I said in a follow-up post, "there's another major reason some of us - cough cough - don't like knitting socks: you have to make another one exactly the same directly after you've finished! I knit my first sock last month and now I'm suffering from second sock syndrome; can't seem to get started on the pair! It might also have something to do with the size of needles - I used tiny 2.5mm ones; perhaps I'd enjoy the process more if they were bigger and the wool thicker... Or if I could knit both at once! My next pattern will definitely be a two-socks-at-once pattern."

Helen came to my rescue, and I started another pair of socks, working on both at once on two separate circular needles (while listening to Scottish band Runrig).

By January 2010, Helen had discovered the magic loop method, which lets you knit up two socks at once on one circular needle. Finally, knitting both socks at once! By February, they were complete, and I wrote: "After the ones on dpns, where I only made one sock, and the ones on straight needles, where I only sewed up one sock and ran out of wool for the second, it's nice to be able to say "I've made a pair of socks!" Hooray for the magic loop method."

And then, it came to me. Kilt hose! And no, not just because Jamie Fraser knits socks and wears a kilt. I do have a couple of friends from Scotland, and one of them happened to have a birthday coming up in a few weeks. What could be easier than making a pair of kilt hose?

I ordered the wool from elann: 10 or 12 (I can't remember) skeins of Oatmeal Heather Highland Wool. 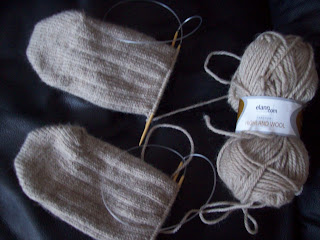 The birthday came and went. However, by April, the kilt hose had feet: 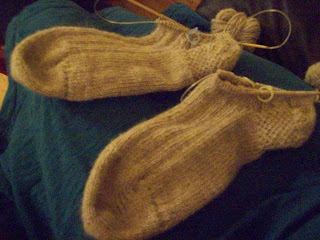 As much as I loved the magic loop method, I found it impractical for the kilt hose, as I'm not good at spatial imagining/planning. I couldn't figure out how to adapt the original magic loop pattern to the additional stitches of the kilt hose. Also, knitting on two circular needles was less tight, and gave me more room to see what I was doing.

The pattern I used was John Anderson's Kilt Hose by Robert Jenkins. The pattern is named for a Robbie Burns poem:

As far as traditions go, Jenkins specifies that "Kilt hose are traditionally worn 3" below the bottom of the kneecap, though 3-fingers distance is close enough if you aren't in the Regiment or have very wide fingers


With two days to go till B-day, I finished the kilt hose!

Close up of the cuff. The cables actually align! 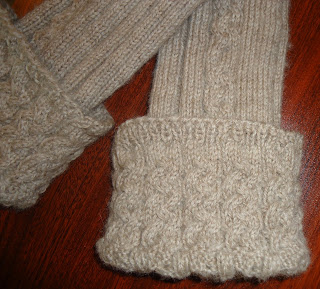 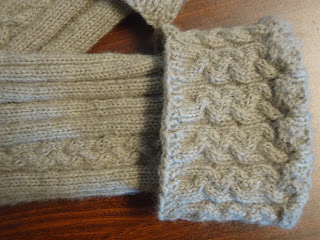 Sneak peek at the garter: 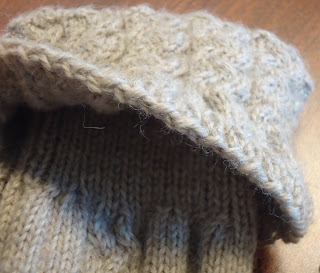 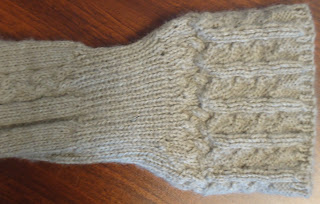 Some pink snuck in there, I don't even know how. But at least you can tell left from right, if needed... 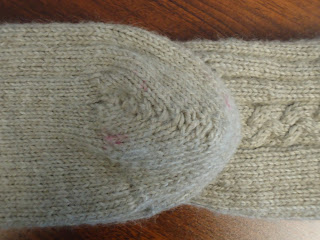 I was very excited to learn that they fit perfectly! Now all we need is a Highland Games or a Gathering, and I'll have live-in-action photos to post. Thus ends the saga of the kilt hose. I love cables, but not sure I'm ready for another such project any time soon. Perhaps a baby blanket with no pattern whatsoever...

Theresa Milstein said…
These socks are beautiful. I'll have to see your post on Nutschell's blog next week!
30 March 2012 at 14:19

Angela Brown said…
I'm not much of a knitter, but I'm always impressed by those who create things with their hands. I realize there's work involved, but when they come out all nice and pretty, it seems like magic.

Nadja Notariani said…
I've always been impressed with knitting. I never learned - and don't know if I could. I have crocheted, but never anything with any difficulty. I've also machine quilted - which I love. Building blocks, however, for me was incredibly challenging. Cutting precisely, keeping my stitches in a straight and even line, and matching the pieces up right sides together - well, let's just say I've ripped out my fair share of seams. Ha!

Steve MC said…
They look great! My grandmother was excellent at knitting and used to make me sweaters, but I haven't seen anyone of our generation take it on, so this was wonderful to see.
6 April 2012 at 04:07