aking a leaf out of Kait Nolan's blog today and posting a summary:

Writing and editing: For one week now I've taken an unexpected, unplanned and unadulterated break from editing Rome, Rhymes and Risk. I did manage to revise the query for Out of the Water, thanks to everyone who offered insightful comments over at Matthew's, but I haven't sent out any new queries. A little scared...

Blogging: I've posted, and thanks to everyone for coming by - I will visit all your blogs soon!

But, and the reason I've been so slack with social media - though I did manage to vote for Jo Bourne and Kait Nolan and Darlene Marshall as they moved up the ranks in DABWAHA - is that I've been:

Knitting: Yes, it's The Saga of the Kilt Hose! I started this project two years ago, for a Scottish friend, and every time I dropped it and started again there was a new deadline. His next birthday. Robbie Burns' night. The Saint Patrick's Society of Montreal Annual Ball. His birthday again.

Not sure what stuck a spur into me this week - the derisive laughter of colleagues who've seen me work on this project on and off for two years might have had something to do with it - but I've been determined to complete the socks for his birthday on Wednesday. I'll put up full details and the annotated pattern (I had quite a few problems understanding it) on the knitting blog at a later date.

Here's what the kilt hose looked like when I had only the feet done, two years ago.

I've got ten rows left to go and then comes the 'finishing' (weaving in the ends and possibly washing and blocking them, if I have the nerve). Wish me luck! 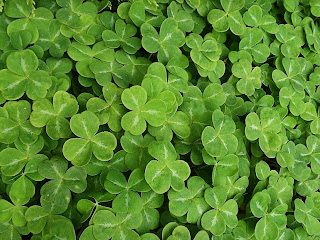 (image courtesy of the Shady Shamrock blog)
Until then, it's parade day! I promise not to get too happy, so that I can finish knitting tonight. Montreal has the second oldest Saint Patrick's Day parade (after NYC, of course) in all of North America; this year's is the 189th edition. I was in/on a float one year (college float - any and all alumni were invited!), but I still can't decide if it's better to be a participant or a spectator.

Friends of mine participated in a Polar Bear Plunge yesterday, to raise money for the Special Olympics. While the plunge is over, I believe you can still donate - head over to the Feisty Fusion team page!

She's sitting on three eggs that are due to hatch at the end of the week!

Ali Dent said…
I'm with you on being scared to send out those queries. I'm almost there myself but why in the world do we pour our selves into our work if we don't want the pay off? You can do this.
18 March 2012 at 16:10

Lauralynn Elliott said…
Good luck on editing AND querying. I know that has to be a scary process. Even though I chose to independently publish, I still want to support writers who are going through the querying process. Stay positive...I wish you great success! :)
18 March 2012 at 17:00

Nadja Notariani said…
I have to admire anyone who would willingly plunge into frigid water...whether for a good cause or not! Ha.

Hope your project runs smoothly to the end, Deniz. Interesting fact about Montreal's parade, I learned something new. I was just telling someone that Scranton, PA has the second largest St. Patty's Day parade in the U.S. each year. My son went to the parade, I pass - I'm not so much of a large crowd person - unless it's my family...lol. But we did go to a local Irish Tavern and listen to authentic Irish music and enjoy dinner.
18 March 2012 at 19:57

KM Huber said…
To me, it makes perfect sense to turn knit oneself into a kilt hose moment, if the alternative is to send out queries. Best of luck on both!

Suzanne Lilly said…
Good for you for picking up the kilt hose again! Those colleagues won't be laughing when you get them done and present them to your friend. I think I still have an unfinished sock or two or ten...let me dig them out. Good luck on all of your projects!
18 March 2012 at 22:57

Michael Di Gesu said…
I with you on the querying. I got stung pretty badly with my first book, but my second so far I have been asked for a full with the two I have sent.

Terrified to send any more out, but I will sometime this week.

All the best with yours.

You friend will really appreciate receiving a lovely hand-made gift, so finish them up already. LOL.
18 March 2012 at 23:48

Marcia Richards said…
Taking a break from the writing biz is a good idea once in a awhile. And it sounds like you're relaxing and having fun! Good luck with your knitting and have a great week!
19 March 2012 at 11:09

Outlander Kitchen said…
I'm jealous of your kilt hose! I want to knit myself a pair of long stockings...but I just never get around to it, ken? Theresa
19 March 2012 at 12:21

Theresa Milstein said…
Hi, Deniz. I didn't go to the Boston St. Patrick's Day parade, but my husband runs in a yearly race. It was this Sunday. Everyone gets decked out in green, so it's a lot of fun.
19 March 2012 at 15:52

Romance Reader said…
Wishing you all the best with your querying Deniz!

Julie Glover said…
Best wishes with the querying! Yes, it can be nerve-wracking. But you never know what can happen until you try! Best wishes for a great final four days (or really two now) of ROW80!
20 March 2012 at 10:38

Neurotic Workaholic said…
Knitting sounds like fun; I've heard that it can be very relaxing, too. I can imagine that it would be scary to send out new queries; I say "imagine" because I haven't queried anyone yet. But I think it's good that you're taking steps to send your work out there, because that in itself is very important.
22 March 2012 at 00:52

Deniz Bevan said…
Thanks so much Ali, Lauralynn, Nas and Eagle!

Your evening sounds lovely too, Nadja!

You're right KM - more fun to knit than query and bite nails!

Thanks Suzanne! I'm so happy I finished them!

I was hurt by my first book, too, Michael (the YA) - 50 rejections out of 50 queries (well, actually, some just never replied). Good luck with your latest round of queries!

Thanks Marcia and Carolyn!