is for Ariana Park, the park on the grounds of the United Nations.

"The park was originally owned by the Revilliod de Rive family whose last descendant bequeathed it to the City of Geneva. ...

One of the bequest's conditions was that peacocks should roam freely on its grounds. It is not unusual to see peacocks dancing in full splendor in the Palais grounds. Most of the birds that visitors can see today are peafowl donated to UNOG in 1997 by a zoo in Japan. Others were a gift from the Permanent Mission of India. The birds are fed and cared for by the park's gardeners. ...

On 9 June 2009, the United Nations Office at Geneva [was] awarded the prestigious "Nature Reserve Certificate" by the Swiss non-profit organization "Fondation Nature and Economie". This well-known environmental quality label is awarded to entities that protect nature and contribute to biological diversity by managing at least 30 per cent of the green areas around buildings in a natural manner. UNOG's many initiatives to qualify for the Certificate include, among others, avoiding pesticides, utilizing compost and making use of sheep instead of lawnmowers. [I can't wait to see the sheep!]

...visitors can enjoy the rich biodiversity of the 46-hectare park, with majestic trees over 100 years old. Over 800 species can be found in the park. Six hundred have been identified so far. Plaques indicating the country of origin, Latin and common names and species have been affixed to 120 of the trees in the areas of the park most frequented by visitors. A team of five gardeners maintains the park and its alleys and plants the flower beds." 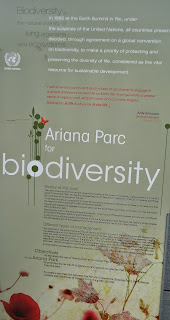 A brief description of the history 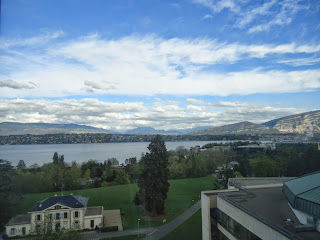 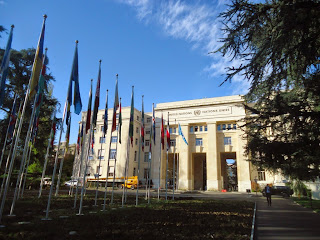 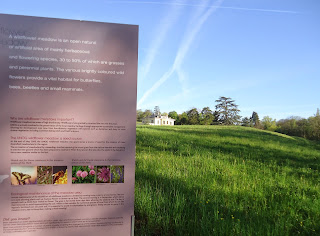 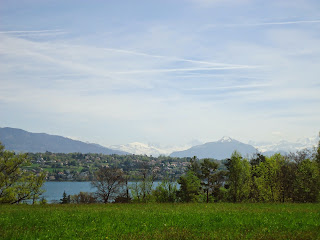 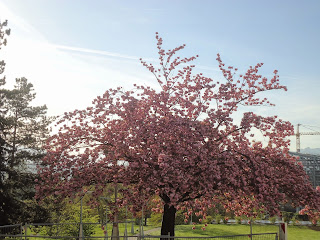 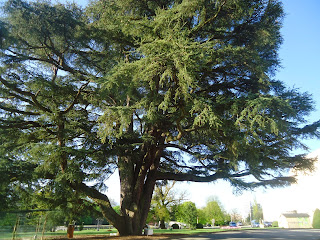 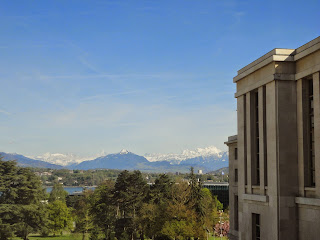 View from the UN 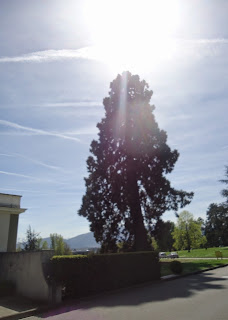 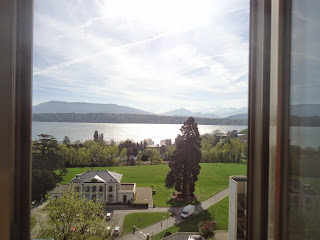 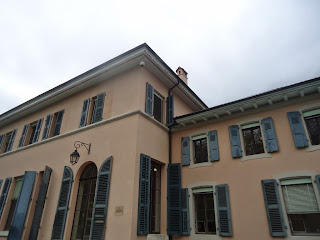 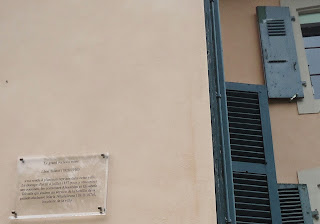 Tolstoy used to stay there!

Alex J. Cavanaugh said…
Were the peacocks hiding that day?
And what do you win if you can identify one of the species?
18 April 2014 at 12:04

Hilary Melton-Butcher said…
Hi Deniz .. How fantastic to have such a wonderful park .. and I love those informative notice boards - sometime please can you write up about them ..

Deniz Bevan said…
Thanks Alex and Hilary!
You'd win my gratitude, Alex! I'm slowly learning, but it's embarrassing how few trees I can recognise by name. And I call myself a Tolkien fan!
1 June 2014 at 06:52