Q is for... Questions

So far I've had four questions:

Who is Louis Favre?

His was the first statue I saw when we arrived, in the park across from our hotel: 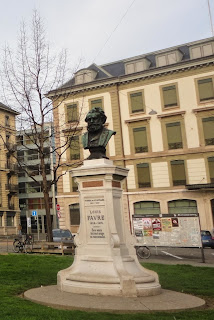 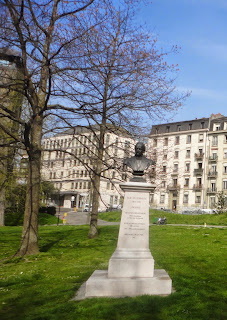 I didn't search too hard, as his Wikipedia entry was fascinating enough. Favre was an engineer who took on the Gotthard Rail tunnel project in the 19th century, building a tunnel through the Gotthard massif to connect Switzerland and Italy:


"The project was, for the time, a vast undertaking, verging on folly according to many critics. Construction of the tunnel was accompanied by very considerable loss of life and escalation of cost, arising out of the novelty of the endeavour and the most insurmountable difficulties which presented themselves."

He died in the tunnel before it was completed. Apparently the tunnel is currently undergoing renovations. As far as I can tell, the oldest rail line is the Brenner line and (again according to Wikipedia) "is the only transalpine rail route without a major tunnel."

Passages across and under the Alps are fascinating! There seem to be a lot of them, all with their own fascinating histories: carriage passes fashioned for Napoleon's army! Not to mention Hannibal and his elephants!

But what does the word Alps actually mean? A fun description is on the Wikipedia page about Hannibal: "Italy is a part of the African continental plate, not the European plate; the Italian peninsula has been jammed into Europe through tectonic plate movements, which created the Alps and more particularly, made the Italian side of the Alps considerably steeper."

The word is derived from Celtic, through French, as a word for high mountains, possibly stemming from *alb (hill). "Roman Albania was a land by the Caspian Sea (modern Daghestan); in English Albania was occasionally also a name for Scotland." (from the Online Etymology Dictionary)

So perhaps that's why Scotland is Alba (scroll down to the last song)!

"It's likely that alb ("white") and albus have common origins deriving from the association of the tops of tall mountains or steep hills with snow." Apparently, strictly speaking, the word alp refers to the


"grazing pastures in the alpine regions below the glaciers, not the peaks. An alp refers to a high mountain pasture where cows are taken to be grazed during the summer months and where hay barns can be found, and the term 'the Alps', referring to the mountains, is a misnomer. The term for the mountain peaks varies by nation and language: words such as horn, kogel, gipfel, and berg are used in German speaking regions: mont, pic, dent and aiguille in French speaking regions; and monte or cima in Italian speaking regions." (Thank you Wikipedia!)

We haven't had a chance to visit the Alps yet, but while apartment hunting, came across an artist. All the street names here have brief descriptions telling you who the streets were named for, which is very handy and interesting. Who was Jean-Etienne Liotard?

He was an artist and art dealer from the 18th century and apparently he visited Constantinople and painted "numerous pastels of Turkish domestic scenes; he also continued to wear Turkish dress for much of the time when back in Europe" as many others have done, including Lord Byron.

Here's his The Chocolate Girl: 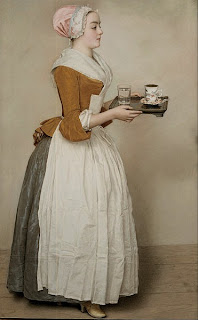 While we're all drinking some chocolate, I'd like to take this opportunity to apologise for being so slow with the A to Z Challenge. My new job is lots of fun, but the hours are long, and we've also been busy finding an apartment! If all goes well we're moving this weekend, but that also means no internet access for a while. Whatever shall I do without Twitter? I promise to visit all of you and keep up with my Minion duties, just more slowly than planned. And ROW80 goals have been set aside a bit, too, unfortunately.

And now, trees! What are these trees?

I've mentioned them before, and it was Hilary I think who suggested they might be plane trees. There are in fact two of them, the darker-bark ones that have been budding and the eucalyptus-type-bark ones that aren't flowering at all. If anyone has more information, please tell me! 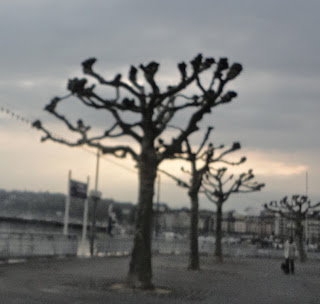 Hope everyone has a great weekend!

Hilary Melton-Butcher said…
Hi Deniz - you're giving us such a great tour of Geneva - history, architecture, arts .. I'll have to be back to read them again.

I'd love to know what the trees are .. I'd have thought one of the gardeners in the UN park would be able to help - when you can get away!!

Enjoy and don't worry too much - you've got masses going on - Happy Easter, good luck with the move .. and we'll be Genevans soon - expert, via you!, on all things!!

Alex J. Cavanaugh said…
The alps are high mountain pastures - now I know. Always thought of them as the whole range including the top.
Still no help on the trees. Maybe they are part of the Joshua Tree family?
19 April 2014 at 09:55

alberta ross said…
I never knew that about the African plates - or the alps for that matter - thanks, I love learnng something new

Deniz Bevan said…
Thanks for coming by Alex and Hilary and Alberta! As far as I can tell they are plane trees. I never thought of asking the gardeners! But I keep asking people who've lived and worked here longer than I have. Apparently it's just that they prune them in these odd shapes. Now I need to find out why they do that...
1 June 2014 at 06:54