R is for... Renverse, and Other Coffee and Desserts

is for renversé. And other coffees, and desserts.

All writers need coffee, and I love coffee with hot milk - I could drink the stuff all day.

Here they call it a renverse because... Well, here's the explanation from the Nespresso (a Swiss brand!) site:


"CAPPUCCINO, LATTE, FLAT WHITE, MACCHIATO – WITH OR WITHOUT CREAM, SPRINKLED WITH CHOCOLATE, A DASH OF VANILLA OR PINCH OF CINNAMON... BARISTAS IN EVERY CORNER OF THE WORLD, HUNCHED OVER GLEAMING MACHINES, HAVE A GIFT FOR INVENTING ORIGINAL COFFEE RECIPES. Every culture has its own speciality: from the Portuguese galão – one part espresso to three parts hot milk, served in a glass – to the Hong Kong style yuanyang – three parts Arabica, plus seven parts milky tea. Amidst all these subtly different national drinks, where does Switzerland fit in? Alongside Nespresso, milk is a national treasure. It goes without saying that these two Swiss perfections are made for one another. Even better, Switzerland has long boasted a traditional blend of coffee and hot milk – despite being less well known abroad.

This drink is known as a renversé in the French-speaking parts, die Schale in German-speaking Switzerland or macchiato lungo in the Ticino area.

The secret behind the recipe is, as the name suggests, a reversal of the proportions of coffee and milk – 40% coffee and 60% milk."

Sometimes they serve it with a little square of chocolate, but I'd already eaten the chocolate by the time I thought to take a photo! 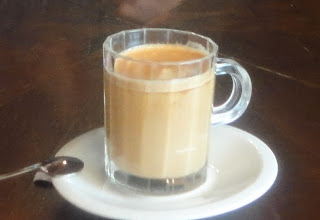 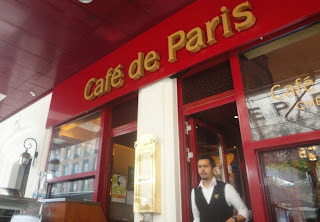 Coffee shop that's been around since the 1930s! 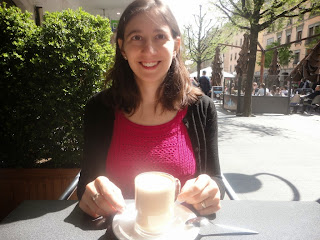 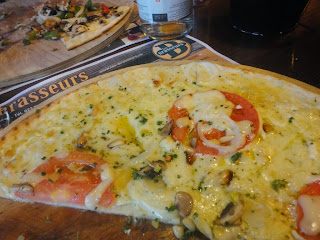 Flammenkuchen! Again, it tasted so good, I'd already eaten half before I remembered to take a photo. 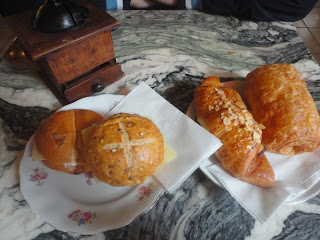 I'm featured on Nicole's blog, talking about Welsh actors and The Chronicles of Narnia!

Hope everyone's having a great A to Z!

Stephsco said…
Delicious, and I had not heard that term before today.

Kelly Steel said…
Your post made me crave stuff early in the morning!

Zan Marie said…
You can have the coffee. Just reserve the Caotina hot chocolate. If you haven't had it yet, it's better than Godiva. I swear!
22 April 2014 at 16:36

Deniz Bevan said…
I'm starving too! It's past my lunchtime. Hope there's a coffee shop open near by (lots of things are closed on Sundays here).
Hope you can visit sometime, Michael!
Ooh, I'll look out for that hot chocolate, Zan Marie. As long as they make it with milk not water :-)
1 June 2014 at 06:55