S is for... Speaking Four Languages

is for speaking four languages!

Switzerland has four official languages: German, French, Italian, and Romansh. Terms used by locals, and not usually used outside of Switzerland, are known as Helvetisms. Apparently some of these words have been borrowed by others over the years, and heimweh, or homesickness (in German) is one of them, first used by Swiss soldiers posted far afield: 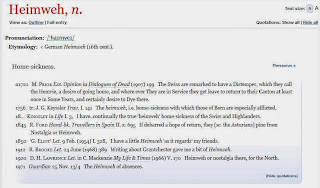 Source: Oxford English Dictionary
I love that first quotation and its reference to distemper, referred to on the German Wikipedia page as "'Schweizerkrankheit' - morbus helveticus."

An interesting new word for me was bise: 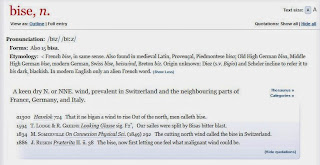 We felt this wind for the first time the other day, and I could see its rippling effects on the lake, which is otherwise usually clear as glass.

Meanwhile, peacocks and peahens on the United Nations grounds! 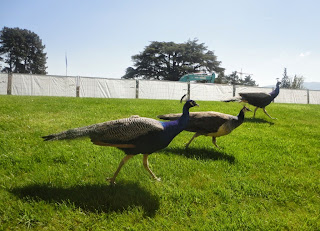 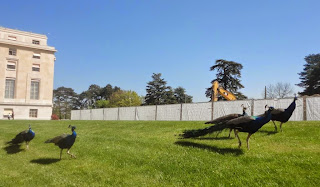 Have you heard the call of the peacock?
How would you describe it?
Some people say it sounds like a cat, but that doesn't quite fit.

S.P. Bowers said…
Love, love the sound of peacocks. My grandfather, who lived next door to us, had some. One of my favorite things was to wake up in the middle of the night and hear them calling to each other. To me it always meant 'all is well' I miss hearing them.
22 April 2014 at 06:31

Hilary Melton-Butcher said…
Hi Deniz .. they can certainly call - there some in a large manorial garden near where my mother lived and they flew over the road and wreaked havoc in the garden! Then came up on to the porch to say hello - not terribly popular! They are very pretty though ... and lovely that you can see them in the gardens ..

Neurotic Workaholic said…
I've never heard a peacock's call before (at least I don't think I have), but I have seen peacocks. I wish I was multi-lingual. I should have tried learning languages when I was younger rather than I was a teenager; it would have been easier to learn them.
22 April 2014 at 12:32

Zan Marie said…
Peacocks! Don't get me started. ;-) There's nothing like having a romantic encounter with your hubby when a peacock right outside your window in Jamaica lets out one of its shrieks! ;-)
22 April 2014 at 16:31

Denise Covey said…
I so admire European's flair for languages. No doubt it is because of their close proximity to each other. When we were in Luxembourg and chatting to a waiter, he told us most Luxembourgians spoke five languages because of being surrounded by so many countries. There's even the German part of Luxembourg, the Flemish part, the French part. So, obviously you have to be multi-lingual.

Loved the pics, too.