W is for... Writing I Ought to be Doing

is for writing I ought to be doing.

I suppose it's understandable that I haven't had time for writing or editing, but I still feel guilty (especially when checking in for ROW80)! I still mean to attempt the NaNoWriMo all day marathon, which officially took place a couple of weeks ago, but which I'll try tomorrow or next Saturday. It would be easiest to start drafting a new story, of course, but what I ought to do is focus on editing or, failing that, typing up last year's NaNo novel. Meanwhile, I heard about a couple of new agents entering the field, and queried them with one of the completed novels, so fingers crossed!

Author Malcolm Campbell was recently part of the My Writing Process Blog Tour, which featured four questions. Here are my answers:

What am I working on?

At the moment, day job and house-setting-up. I should be editing Druid's Moon some more, and typing up last year's NaNo story Larksong. I've also got some knitting projects I'd like to start!

How does my work differ from others of its genre?

My three historical romances differ in their settings, I think. I haven't come across many novels set in the 1470s or 1490s that don't feature royals or nobles of some kind. My characters are everyday folk!

And my paranormal (Druid's Moon) is different mostly in that it's 'contained' - there's no grand worldbuilding. Just a menacing paranormal creature (a Kraken-type creature) that's haunted a family for centuries.

Why do I write what I do?

I write what comes! Usually it's an image, such as for The Face of A Lion: I had an image come in my head of a boy and a cat walking down a dusty road, and the sea was rising behind them. I knew it meant they were walking back into time. And so I started writing to find out what happened...
Other times it's dreams; that's how I got into the world of Larksong, which is my first story set in the 1910s. Or the dystopian that's still milling about in the back of my mind...

How does my writing process work?

When everything's on schedule it's kind of like this: Draft story during NaNo. Type up story over the next month or so, editing as I go. Copy from PlainText on iPad into Scrivener on the pc, separate into chapters and scenes, and print story. This is the stage I'm currently at with Captive of the Sea. The next step should be editing on paper, then entering all those changes. In between I participate on the Compuserve Forum, sharing snips and doing exercises and the like (and having fun at houseparties!). Then comes sharing the story with betas, more editing, fine tuning, writing the query and synopsis, and finally, within a year if I've been organised, querying!

Sometimes you just have to stand still for a while...like this guy: 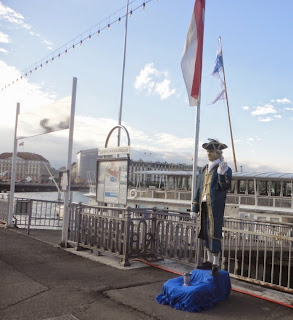 How does your writing process work?

Malcolm R. Campbell said…
I also like to write "what comes."

Deniz Bevan said…
Thanks for coming by, Malcolm! I like your method of checking to see if anything's changed in Florida :-) Wouldn't it be great if we all had friends stationed where our stories take place?
26 April 2014 at 12:22

Leslie S. Rose said…
Fingers crossed on your queries. I keep separate note books for project ideas. When I have a ton of notes I start seeing a shape to the story. That's when I dive in.
26 April 2014 at 12:23

Zan Marie said…
I'm currently within 90+% of finishing a MS, but as I discover more about my characters, I have to go back over and over to layer in more. Right now, it's to layer in more of the damage to my abused teen.

debi o'neille said…
I love the title of your blog post – writing I out to be doing. I don't aim want to think about mine right now. I also participated in the "My Writing Process" blog hop. Good luck on your to queries to agents.
I'm your newest follower from the A-Z of tired bloggers. :-)
Deb@ http://debioneille.blogspot.com
26 April 2014 at 15:33

Shan Jeniah Burton said…
My images often come to me in the shower. That really used to confuse the kids, when they were smaller, and I said I was going into the shower to write.

I used to write them as soon as I had them, but now I let the images and snips of action and dialogue roll around for some time - months, usually - until they seem to absorb from everything, and start getting into my dreams.

Trisha said…
I would agree your chronological setting is unusual. That would definitely entice me to check the books out. :)

I actually did some editing tonight, after many days of nothing. Got through yet another tough chapter. But now I have to transcribe the edits (a bit task in itself) and re-edit the chapter on paper again.
27 April 2014 at 08:49

Beverley Baird said…
I tend to see my stories as a movie and I then have to capture their story. Very interesting to read about your process.
27 April 2014 at 10:21

Inger said…
How great: "I started writing to see what would happen." We should all be able to let our imaginations flow that freely. Loved that sentence.
27 April 2014 at 17:30

Liz Blocker said…
My writing has slowed to a crawl this month, and that's being generous! The A to Z Challenge has been a lot of fun, but it's also sucked up a LOT of time. I'm looking forward to May!
27 April 2014 at 18:13

Anonymous said…
Best wishes on the queries! I like how you distinguished your writing -- what makes your stories stand out. Sounds like great stuff! Have a terrific round, Deniz!
27 April 2014 at 19:53

Jean said…
I'm still working to find a writing rhythm. This year, I've slowly been getting a repeatable process down. It feels good to me, but there's no progress that's visit to someone other than me. Gotta start somewhere, though.

Jean, visiting for the A-Z Challenge from Rantings and Ravings of an Insane Writer
27 April 2014 at 21:48

dolorah said…
hehe, i kinda write to find out what happens with the images in my head too. I've been "standing still" for too long now, time to start again on some of those unfinished projects. Not sure I remember how to write more than a flash fiction anymore though.

Stephanie Faris said…
Do you like Scrivener? I never thought about writing it elsewhere and copying it in later. I guess the process of making notes and such as you go would slow things down?
28 April 2014 at 07:41

Anonymous said…
It sounds like both our writing processes start in a similar place. I also have an image that comes to me--a place, a character, an object--or maybe a turn of phrase that gets the story wheels turning.

Deniz Bevan said…
Thanks everyone! Maybe I should share a few snippets of Austin's story...
Stephanie, I *love* Scrivener! I can't wait till they have it for iPads too.
1 June 2014 at 10:55