is for Owen Barfield, veteran, lawyer, and author. He was as much an Inklings as his day to day fortunes allowed him to be, especially after he'd turned to the law full time as the only means of making a living possible for him.

Unfortunately the books of his that I've read, including Poetic Diction, Saving the Appearances, History in English Words, and his childrens' tale The Silver Trumpet, are all back in storage, and I can't really refer to them to refresh my memory of some of his main ideas. I know I'd like to reread them, and would definitely recommend them. 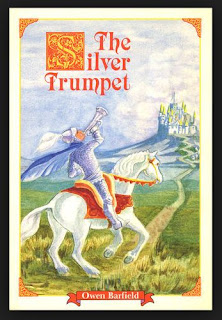 I know a number of his thoughts on language and myth making had a direct influence on both C. S. Lewis and J. R. R. Tolkien; the most recent example can be seen in the the latest Tolkien publication, an annotated edition of one of his lectures, A Secret Vice, all about the private and personal creation of languages (along with those furthered by international committee, such as Esperanto, and those created specifically for literature, such as Swift's vocabulary for some of the places in Gulliver's Travels).

A different form of A Secret Vice was included in the collection The Monsters and the Critics and Other Essays, but this edition reprints many of Tolkien's draft phrases and notes, and there are at least two places where the reader can see him working out an idea, and then simply writing "cf. Barfield" in the margin.

The Lucy in the Narnia books, of which the first book is dedicated to her, is named after Barfield's daughter.

I've already shared the video of when Barfield visited the Wade Centre, where many of his papers are collected.

One book I haven't read yet is Verlyn Flieger's Splintered Light: Logos and Language in Tolkien's World, which apparently includes an analysis of Barfield's influences on Tolkien. And now, looking through the official Barfield website, I've come across a number of essays I'd like to read:

A highly valuable, and surely not easily refutable, exposition of the relation between the legal history and economics, and the necessity of trust to good economics, it is nevertheless as well to be frank, that it is unorthodox in its approach. But for this reason, it is in some respects ahead of its time: it is accepted now, as it evidently was not when Barfield wrote it, that banks, in extending credit, are creating money; and the concern with the immaterial nature of credit is extremely contemporary. There are very interesting nuggets relating to the history of trust; and it is unusual in itself to read an Englishman praising the civil law of equity, rather than the common law.

Trade unions may not have the power they once did. But this pamphlet should still be read for all its analytical power. The contemporary analysis of the political situation in the run-up to the Second World War, which points out the economic causes of the crisis, while not reducing it to them, is excellent. Barfield’s analysis of the function of the state as an instrument of national competition still rings through. Above all, the pamphlet is a spur to thought.
Beginning analytically, the extraordinarily heartfelt nature of this essay reveals itself quite quickly. It was originally a lecture delivered in 1953, at the request of Barfield’s great friend Cecil Harwood, as part of a series on “Rudolf Steiner and Christianity”. In our time of doubt, it is perhaps most wisely informative on the enigmatic connection between death and God the Father.

The historian John Lukacs once asked Barfield, “Have you ever considered writing your own intellectual autobiography? I literally CANNOT think of a more important book. [...] What I mean is something like the history of your memory, and not the reverse.” Apart perhaps from an abandoned “psychography” from the 1940s, this is the closest Barfield came to writing his intellectual autobiography. In itself, it records the evolution of an individual consciousness.


And also these articles:


In tendency this article is of a piece with Barfield’s bold declaration to T. S. Eliot, some time after he had published The Waste Land, that,”I am a little tired of literature that can do nothing but point out ironically that there is nothing much going on but disintegration and decay.” It points out that there can be no rigorous separation between literature and life, and finally embodies an attitude to life – an excited attitude. If Barfield’s literary aesthetic was often traditional, it was because he thought that the best vehicle to convey it.
The speculative claims in this article can be tested only according to their internal logic, broad correlation with history, and the sense of their rightness. There is a wealth of literary insight in this summary, rather than review, of Dorothy Faulkner-Jones’ book, The English Spirit. For instance her remark of the storgic, rather than erotic appeal of Jane Austen’s novels. The reference to the the living prototype of Hamlet’s previous incarnation as Troy’s Hector might raise an eyebrow; but the reference to Hamlet’s great capacity for love, equally might cause one to smack one’s face: not obvious, but surely correct.
An occasional piece which nevertheless makes some points about the nature of the creative imagination and the nature of infinity.
Owen Barfield was a friend of the poet Walter de la Mare. This piece was written at the centenary of his birth, when his reputation was wavering. It is also a very clear illustration of what might be called Barfield’s perennialist aesthetic, one not fixated on modernity and modernism.

Breaking into the A to Z to touch on a bit of ROW80 -- the Library in English book sale starts on Friday! 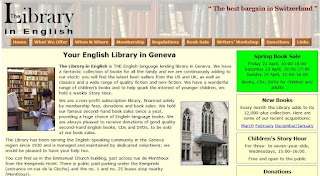 I made some more inroads into the books we already own, reading two delightful Somerset Maughams and Kazuo Ishiguro's Never Let Me Go. I'm 20 pages away from finishing the latter, so no spoilers please! It's so off-kilter and interesting, and really sort of ethereal... Despite the dystopian element, it actually feels more like a study in adolescence. It reminds me so much of what high school was like, and what it felt like, the constant inwardness, the endless desperate search for connections and meanings, the roundabout discussions and analysis of the most minute events and feelings and words, the overall sense of invincibility and plans for the future, all of that. It's going to be one of those books that are difficult to stop reading, I think.

I read three books -- and then just yesterday I found one that had fallen behind a stack of others. I doubt I'll ever finish reading all the books in these piles!


What did you last pick up at a book sale? Any unexpected, intriguing finds?

Hilary Melton-Butcher said…
Hi Deniz - your Barfield essays seem to be good reads for us (English) to understand behind the scenes of the 1930s ... I really must start to read. I picked up Lorna Doone and Westward Ho! ... to read sometime.

Good luck with your reading ... but you are giving us a marvellous overview of the Inklings and those connected to the literary group ... as well as giving us other book ideas for us to read at some stage ...

Beverley Baird said…
It's been so interesting to read your posts for A to Z challenge. Sounds like an interesting read (Never Let Me Go) - I will have to check it out. All the best as we end the April challenge.
18 April 2016 at 23:39