is for The Place of the Lion, by Charles Williams.

I've read a couple of his other books, but reading his work is kind of like reading James Joyce's Ulysses or Finnegan's Wake -- you need help.

I haven't read Finnegan's Wake, but I have read Ulysses, and I did it in a very specific way: I read a chapter a week; first I'd read the chapter, think about the words, enjoy the flow of language, and try to understand what was going on; then I'd read the Stuart Gilbert analysis book (which I actually bought by accident once and was later really glad I had), and learned about all the references and symbols Joyce had used, so that then I actually understood what I'd read.

Charles Williams is like that. On one level, you can understand the plot of the tale just fine. But he's got so many esoteric references and connections and clues, that you would get more meaning from the story if you knew them all.

"'Taliessin through Logres contained some beautiful poetry,' wrote T. S. Eliot a year after the book was published, 'but also some of the most obscure poetry that was ever written.'" (from Humphrey Carpenter's biography of the Inklings.) Earlier on, Eliot had said of Williams' work, "There are no novels anywhere quite like them. [He] makes our everyday world much more exciting, because of the supernatural which he finds always active in it." To some extent, this was actually how Williams seemed to live his life.

Williams became an Inkling through C. S. Lewis. He'd been writing piles of stuff -- poetry, criticism, plays, biographies (including one of Lord Rochester), and more -- when Lewis happened to read Neville Coghill's copy of The Place of the Lion. They started a correspondence, and when Williams was transferred to the Oxford University Press office in Oxford during the war, he began to attend the regular Inklings sessions.


Carpenter relates that, another time, "another visitor made an even briefer appearance, and not strictly at an Inklings meeting. This was T. S. Eliot, whom Charles Williams had been eager to introduce to Lewis for some time. They met over tea at the Mitre Hotel one day in the last months of the war. Eliot's opening remark scarcely delighted Lewis: 'Mr Lewis, you are a much older man than you appear in photographs.' The tea party progressed poorly, and was enjoyed by no one except Charles Williams, who seemed to be immensely amused."


Later, though, after Williams' death, he noted, "'I think we both found the other's mind (or rather mode of expression, and climate) as impenetrable when cast into 'literature', as we found the other's presece and conversation delightful.'" Carpenter's biography goes into their relationship at some length, including Williams's thoughts on The Lord of the Rings: 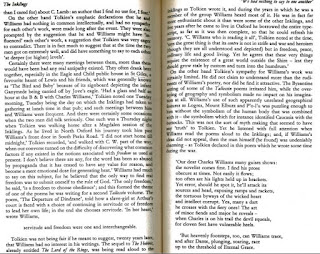 Tolkien's poem goes on for two more pages -- clearly he did grow close to Williams during the Oxford years.

On 15 May 1945, Lewis' brother Warnie wrote in his diary, after taking a telephone message that told him "Mr Charles Williams died in the [hospital] this morning":
"'I felt dazed and restless, and went out to get a drink: choosing unfortunately the King's Arms, where during the winter Charles and I more than once drank a pint after leaving Tollers [Tolkien] at the Mitre, with much glee at "clearing one's throat of varnish with good honest beer" as Charles used to say. There will be no more pints with Charles; no more "Bird and Baby"; the blackout has fallen, and the Inklings can never be the same again.'"

He might not have meant it as prophesy, but he was right. By 1949, thoughh they might have been working on essays and stories, the Inklings were no longer reading aloud to each other parts of their MSs, and "Thursday nights now depended chiefly on conversation. ... This meant that the success of the evening was rather less certain, depending entirely on the mood of those present. ... The end came almost imperceptibly, and for no apparent reason. The last Thursday Inklings to be recorded in Warnie Lewis' diary was 20 October 1949. ... 'The best of them,' said John Wain [author and student of Lewis], 'were as good as anything I shall live to see.' ... Tuesdays at the Bird and Baby continued, but that was not quite the same thing, and the word 'Inklings' no longer appeared in Warnie Lewis's diary."


Ten letters to go in the Blogging From A to Z Challenge!

Thank you again to all the hosts and minions. They've been doing a great job keeping up morale, commenting -- there's even swag! I do love that word. They've also been sharing some good advice and tips, including this important post about sharing and tagging images. I have a LOT of visits and comments to catch up on. Weekends don't work for me cos of baby, but if work gets back on an even keel, as I hope it will next week, then all my lunches will be free and I will visit with gusto!

I also seem to have made a wee scheduling error when I was putting up all my placeholder draft posts. My 1000th blog post is coming up! It will be on Wednesday, but I'd originally thought it was going to be Thursday. So some of my posts might not match their assigned letters... But there will be a celebration! And chocolate! And a contest! Stay tuned...


Have you reached any blogging milestones lately?

sage said…
Congratulations on 1000 blogs. I passed a 1000 a couple of years ago and to celebrate wrote about a trip to the Faroe Islands. Since then I have been posting much less than I did in the first 1000 post.

betty said…
Congrats on almost reaching 1000 posts!!! I think with the A/Z challenge, I did go over 70,000 views for my blog so that could be a milestone!

I haven't heard of this author or book; might have to put it down on my to be read list after the challenge is over!

thanks for visiting and blitzing me!

Hilary Melton-Butcher said…
Hi Deniz - what a great post ... it seemed to tie a few things in together - the Inklings etc, the fact of how you read some of your books ... you are certainly giving me food for thought here. Interesting too - how the Inklings faded as times changed.

Your 1,000th post - amazing ... especially if they are all similar to this - which I know many of those one thousand will be ... ne-er mind re timing ... and I'll now go and look at your link re sharing and tagging images.

You've a lot going on and your little one deserves some time!