is for questions and answers!

By which I mean the very many scholars and authors who have explored facets of Tolkien’s work and influences, including Charles Noad, Corey Olsen, Dimitra Fimi, Douglas Anderson, John Garth, John Rateliff, Taum Santoski, Verlyn Flieger, Wayne Hammond and Christina Scull and many more...

I always hoped I'd be part of this group someday. I had a fledgling idea for a thesis once, and even sent an email to Verlyn Flieger about it! She was gracious enough to reply, but questioned whether it was an idea worth pursuing. In the back of my mind, I think that if I ever go back to school for a higher degree, I'd do it purely for fun, to study English, and to maybe explore that original idea further...

The most recent scholarly edition I read was the new publication A Secret Vice, edited by Dimitra Fimi and Andrew Higgins: 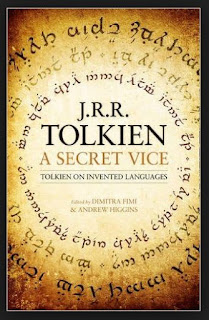 A Secret Vice is an annotated edition of one of Tolkien's lectures, all about the private and personal creation of languages (along with those furthered by international committee, such as Esperanto, and those created specifically for literature, such as Swift's vocabulary for some of the places in Gulliver's Travels). A different form of the lecture was included in the collection The Monsters and the Critics and Other Essays, but this edition reprints many of Tolkien's draft phrases and notes, providing an over-the-shoulder view of his thoughts coming together.

Speaking of long-term projects, something I did for my 500th post milestone was to collate all my blog posts by theme. I'd love to do that again, because tomorrow... I will hit 1000 posts!

Even if I can't manage that, though, I will be hosting a week-long contest, same as last time. Stay tuned!


What is your latest blogging milestone?

Hilary Melton-Butcher said…
Hi Deniz - you are obviously a great organiser and creator of lists ... I really need to sort my blog labelling out ...

A Secret Vice - looks like a fascinating lecture/book to have access to .. but I love the idea of your Thesis - and I hope you get to do it at some stage ...

Anonymous said…
Since following you during the #Challenge I am behind in reading your posts. Trying to visit as many blogs as possible. Looking forward to concentrating on the posts I've missed soon. Visiting on letter R day....my R is about a hotel in Rome, which I used in a second novel. Having fun, hope you are too. Cheers.
21 April 2016 at 12:39